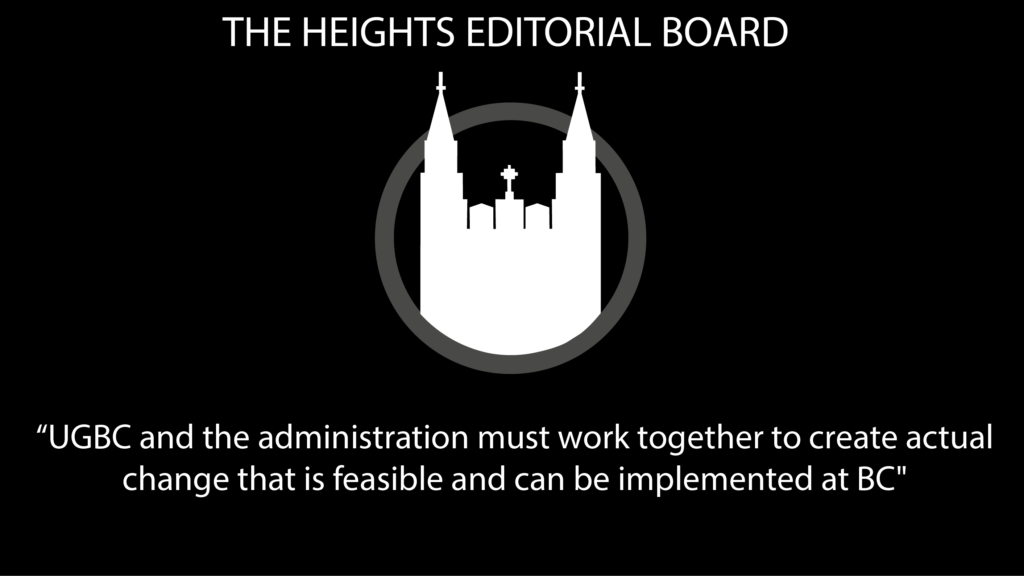 A letter written by interim Vice President for Student Affairs Joy Moore was released to the Undergraduate Government of Boston College (UGBC) and rejected most of the student body’s proposals, but also sought to provide an explanation to UGBC for the rejections. The UGBC resolution was released in response to racist epithets allegedly written on campus by Michael Sorkin, CSOM ’21, and notably called for Sorkin to be expelled immediately; a supplemental essay on diversity to be added to the BC application; and funding for the Thea Bowman AHANA Intercultural Center (BAIC), Learning to Learn Office, and Montserrat Coalition for the 2019-20 year to be doubled. The administration rejected all of these suggestions.

Moore’s response represented a capstone in missed chances on behalf of both the administration and UGBC. The racist vandalism was an unfortunate opportunity to make tangible change, something that neither group has yet to actually achieve.

Following the racist incident in December, UGBC rushed to take action. Though clearly the situation demanded action, it seems that timeliness was put ahead of the formation of an effective gameplan to combat racism at BC and promote inclusivity.

Some resolutions called for were either illegal or simply not feasible, a fact that senators should have researched before the resolution was voted on. Senators called for the doubling of funding for the Bowman Center, Learning to Learn Office, and Montserrat Coalition for the 2019-20 year. Funding is determined as a part of the University’s overall Operating Budget, and it cannot be changed mid-year. Senators also called for immediate expulsion of Sorkin, which is illegal—per U.S. law (and BC policy), Sorkin is entitled to a disciplinary hearing.

The administration also declined perhaps what would have been the most effective parts of the UGBC resolution. The mandatory diversity essay on the admissions application was rejected. Moore stated that there already was such a question, but declined to also mention that it is part of a choice of four essay prompts prospective applicants can choose from. So it is, for all intents and purposes, optional.

A request for a first-year seminar course on the topic of diversity was also rejected—instead of affirming commitment to a mandatory course on diversity, Moore said that University Core Renewal Committee would continue to look into expanding Difference, Justice, and Common Good classes.

Now that both sides have had a spark that unfortunately demonstrated the need for continued action, and an aftermath in which both failed, the rejection of UGBC’s proposal cannot be the end of both sides’ push for diversity and inclusivity. Over a year after “Silence is Still Violence,” all the BC community has to show for its efforts to deal with institutional racism is an imperfect diversity module, a student experience survey with unknown results, and a slight uptick in faculty diversity. Students marched, students made themselves heard, but there is nothing to show for all that action. There are no academic initiatives to fight institutional racism, and no initiatives have been launched to try to effect change among the student population.

UGBC and the administration must work together to create actual change that is feasible and can be implemented at BC—the legislative arm of the student body should never present a resolution to the administration in a time of crisis that is rejected on almost every level. That there is such a clear disconnect between what the University is doing, what it’s capable of doing, and what UGBC wants it to do shows an alarming lack of communication between UGBC and administrators. UGBC and the administration must recover from their initial stumbles and work together in open communication to make tangible policies that bring real results to BC.

UGBC
Pick Your Friendships Over Your Housing
Meatball Obsession Torn Down, Students Mourn