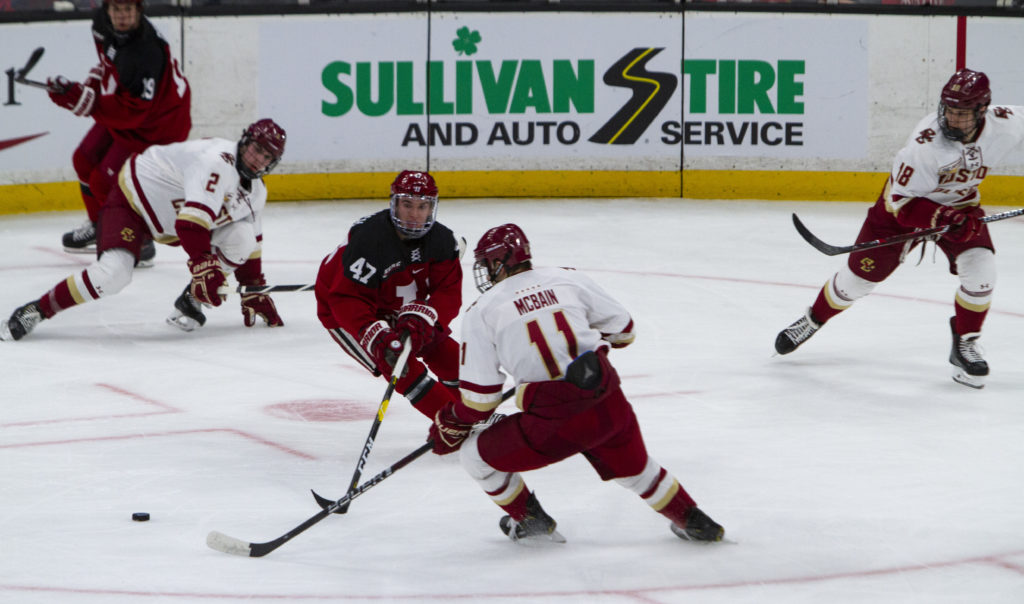 For the first time since the 2015-16 season, Boston College men’s hockey had something to cheer about in the Beanpot. In a back-and-forth, physical semifinal, Jack McBain’s goal with seven minutes to play in the third period broke a 1-1 tie, and the Eagles defended admirably down the stretch, killing off a Harvard power play that started with 1:57 left in the contest to come away with one of their biggest wins of the season. Here are 10 observations from BC’s hard-fought 2-1 victory that advanced the program to a Beanpot championship bout against Northeastern next Monday night.

Starting games well has not been the Eagles’ strong suit this season. As a mark of the team’s inconsistency, BC has scored 16 goals in the first period of games this season, as opposed to 24 in the second, often looking lethargic when it first takes the ice. Monday, on one of the biggest stages of the season, the Eagles were able to buck the trend. Just five minutes into the opening frame, BC created an odd-man rush when the puck flew off Harvard forward Michael Floodstrand’s stick, and Graham McPhee played a perfect pass to Patrick Giles. The freshman buried a shot top shelf for an Eagles lead just five minutes into the game. In a game with so few goals, an early advantage was crucial, and thanks to Giles, BC got it.

Much of the excitement surrounding the Eagles entering the season surrounded an excellent recruiting class that was ranked fourth-best in the country by Neutral Zone. The freshmen—especially Oliver Wahlstrom and McBain—have been solid if not spectacular this season, but in their first Beanpot, they put their best foot forward. First it was Giles, coming up with his first collegiate goal of the season to give the Eagles the lead before McBain and Wahlstrom combined for the team’s biggest goal of the year. Wahlstrom drove down the left wing, receiving a pass from McBain and drawing the attention of a defender before sliding the puck back toward his fellow freshman. The puck deflected off the skate of Reilly Walsh directly to the stick of McBain, who slotted a shot into the top right corner past Harvard netminder Michael Lackey for the winning moment.

The win over the Crimson also snapped a pair of ignominious streaks for the Eagles. First, the victory marked the first time BC had won a non-conference game since Nov. 13, 2016, a stretch that spanned 22 contests and a wide variety of opponents, from Arizona State to current No. 1 St. Cloud State. At the end of the day, it’s just a footnote in a semifinal win, but at least now the Eagles can take the ice next time they face off against a team that doesn’t play in Hockey East without the pressure to finally break the streak hanging over their heads.

Additionally, BC broke a four-game Beanpot losing streak that includes lopsided semifinal defeats to Northeastern and Boston University in style, advancing to the championship game for the first time since the 2015-16 season. In what’s been an up-and-down season for the Eagles, at least they’ll have a chance to play for a trophy for the first time since the 2016-17 Hockey East Tournament final.

5) Other Lines Show Up

This season, the first line has had to carry more than its fair share of the offensive load for BC, as other lines have struggled to generate consistent scoring opportunities. Entering the game against Harvard, the Eagles’ top-strength first line of David Cotton, Julius Mattila, and Logan Hutsko had accounted for 26 of BC’s 58 goals on the season, or roughly 45 percent of the Eagles’ scoring output. But against the Crimson, it was the other lines that came up with the biggest winning plays. The opener was produced by a pair of fourth-line players in McPhee and Giles, while Wahlstrom and McBain found the winner from the second offensive group. It was also BC’s fourth line that killed off the Crimson’s final power play, with McPhee selling out for a crucial block on a shot from Adam Fox that allowed the Eagles to see out the victory.

Harvard entered the Beanpot with a power-play conversion rate of 34.3 percent, tops in the country and, as head coach Jerry York pointed out post-game, a rate that’s “unheard of at any level.” The Eagles gave the Crimson four separate one-man advantage opportunities, but played excellently on the kill all night, not allowing Harvard a single goal on the power play and making it difficult for the Ivy League foe to generate quality shooting opportunities with great defensive rotation and tenacity. Perhaps most impressively, after Mattila was sent to the box with 1:57 left in the game and the Crimson pulled Lackey, BC was able to kill 97 seconds of 6-on-4 action, not allowing Harvard a single shot on goal in the process.

That being said, the Eagles still likely would have conceded on one of the Crimson power play opportunities if not for Joseph Woll, who made several spectacular saves on Fox and Walsh in the final minute of the first period after Marc McLaughlin took a seat for cross-checking. He turned in an impressive effort throughout, never cracking under pressure late or amid scrums in front of net as well. The junior goalkeeper—who finally earned his first Beanpot win—finished the night with 27 saves, including a spectacular effort on a glove save diving to his left across the crease, and showcased the talent that made him a third-round NHL Entry Draft pick back in 2016.

While one half of BC’s special teams excelled, the other did not. Harvard was penalized six times, giving the Eagles five power-play opportunities, but BC simply wasn’t able to capitalize. This, despite the Crimson entering the game successfully killing just 75 percent of opponent power plays—a figure which ranks sixth-worst in the country. For much of the game, BC looked disjointed when a man up and simply unable to apply sustained pressure in Harvard’s zone. The Eagles even had trouble setting up their power-play offense. On one particularly egregious chance halfway through the second period, BC didn’t even get the puck across the blue line for 45 seconds of the two-minute penalty.

As the 2-1 final scoreline might indicate, it was a game of few chances. BC finished the game with just 18 shots on goal—10 fewer than Harvard—but was still able to emerge victorious, thanks to some timely finishing. The Eagles did leave some opportunities on the table—most notably when Christopher Brown missed an easy chance on the doorstep off a neat feed from Hutsko in the second period and J.D. Dudek wasn’t able to slide the puck in on a wrap-around—but were able to convert on two of their few scoring chances. The same can’t be said for the Crimson, who looked lively but will rue some missed opportunities, most notably on a Fox drive that hit the post and a couple efforts that Harvard skaters couldn’t sneak past Woll.

Tournament semifinals always have the potential to get physical and Monday’s game was no different, as both teams threw out their fair share of hits. Luke McInnis had a couple of the biggest collisions of the night, as he laid out two Harvard skaters in the BC defensive zone. Occasionally, the physicality did cross the line, as a second-period scrum that ended with both Dudek and Jack Drury getting sent to the box for hitting after the whistle and an ugly knee-to-knee collision between Cotton and Jack Badini with five minutes to play in the game showed, but it also enhanced an atmosphere that became progressively more raucous as the contest played out and served a part in an another entertaining Beanpot game for the Eagles.