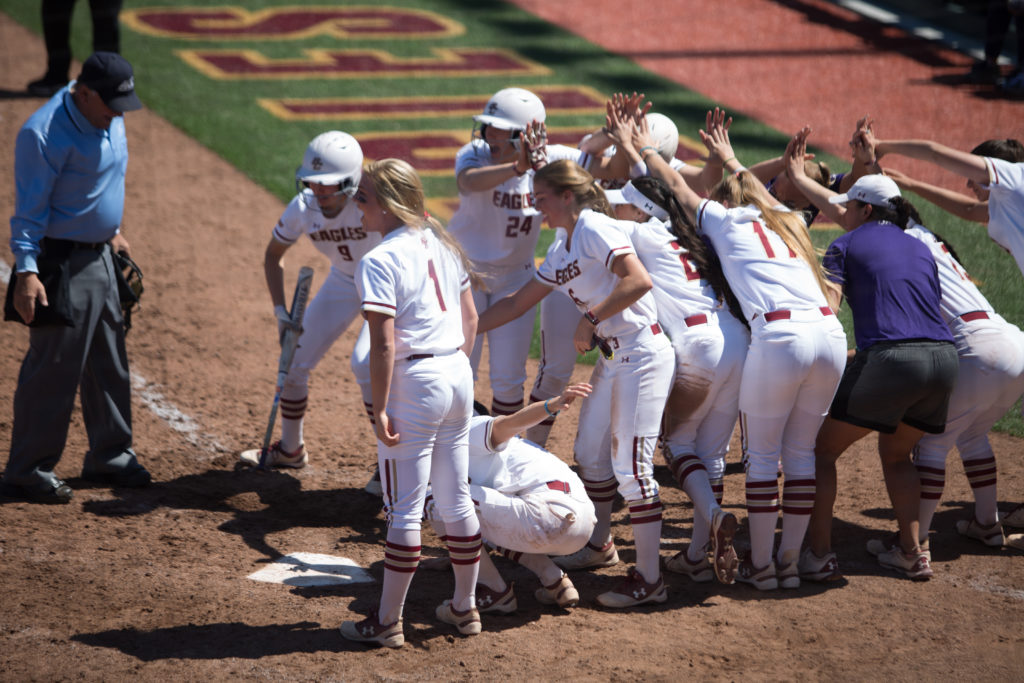 Since Boston College head softball coach Ashley Obrest took the head coaching job back in 2012, the Eagles have gone from 15-31 and firmly in the cellar of the ACC to actually stringing together wins and taking strides. Last year, the team had a program-long 13-game winning streak that started in March, upset No. 13 Florida State, and saw five players earn All-ACC honors.

This year might not go quite as well, though. BC took a massive hit in May, losing three of the aforementioned all-conference selections to graduation—the all-time wins leader in pitcher Jessica Dreswick, the team’s leader in average Annie Murphy, and the home run leader Chloe Sharabba. Obrest doesn’t just have to replace these three, however, as pitcher Allyson Frei opted to use her final year of eligibility at conference rival Virginia.

So, overall, the Eagles enter 2019 having to replace their top two hitters by average and a remarkable 362 1/3 of 363 innings pitched last year. As expected, the team will take on a youthful approach in the new year, centered around an incoming nine-person freshman class. With the other returning All-ACC selections—Emme Martinez and C.C. Cook—starting their sophomore years, it’s no surprise that the team was slotted at fifth in the Atlantic Division and ninth overall in the conference.

The incoming class will have an immediate chance to contribute in the starting lineup, especially with Cook—who recovered from a torn ACL in the offseason—moving from the outfield to pitch. Fans who watched the team last season will likely be caught off guard with the lineup, as two-thirds of it could very well be made up of newcomers to the Heights.

“There could be a potential that six freshman start,” Obrest said. “Along with one senior, one junior, and one sophomore. The most familiar face out there will be Lexi [DiEmmanuele].”

In last season’s 6-1 loss to Notre Dame in the ACC Tournament, Jordan Chimento called the pitches behind the plate, polishing off a four-year career where she started at least 49 games each season. At the moment, freshman Gianna Boccagno, described by Obrest as a “power hitter” who had a really good fall and boasts plenty of potential, is set to replace Chimento.

Boccagno is the first of many new faces in the infield, as the Eagles had to replace Cami Sellers, who manned first base in 2018 and transferred to Montana. The position will be split between junior Jules Trevino and freshman Kristin Giery. Junior Olivia Markopoulos figures to play a bulk of second base, too, as the Crozet, Va. product started 40 games last season and hit just .125.

The left side of the infield will have a new look, however, with a pair of freshmen winning starting spots in the fall. Carlie Sanders, who boasts the Missouri high school state record for home runs in a season, will take over shortstop after Sharabba’s departure. Described by Obrest as a “super athletic kid who is great defensively and an intelligent infielder,” Sanders will have a helpful mentor in Sharabba nearby—the graduate joined the coaching staff as an assistant.

The hot corner will feature Kennedy Labshere, a four-year starter at Valhalla High School in El Cajon, Calif. Martinez played a bulk of third base last season, but could see more time as a designated player. The outfield will be anchored by DiEmmanuele, and likely feature some combination of Ellie Mataya, Britney Richardson, and Gianna Randazza.

Where most of these players fall is up in the air. Obrest described sorting her lineup as a difficult task, as she “tries to figure out how to get the best nine bats in the lineup.”

The rotation is loaded with question marks, but Obrest highlighted freshman Camryn Dolby as the early leader in the group. Classmate Susannah Anderson and Cook will also be key pieces, with Obrest adopting the approach of “everyone will get their opportunities the first couple of weekends.”

Dolby has dominated the softball scene since she arrived at Woodgrove High School in Round Hill, Va., setting the state record for strikeouts per game (15.4) as a sophomore. Dolby posted an impeccable 0.54 earned run average over almost 500 innings of work en route to back-to-back Virginia State Player of the Year honors. Anderson hails from the same state and was similarly impressive, while Cook threw a lone inning last year, but her injury circumstances have returned her to the mound.

The potential for this team is hard to pin down, as one can never know how freshmen will adjust to the college game. If Obrest’s recruiting class can step up, a run of strong 30-win seasons can continue. One potential problem for her, should the team gel and make noise in the conference season, is that the Eagles haven’t won a conference tournament game in 11 years—and youth doesn’t usually give you an upper hand in those matchups.

The early weeks of the season will be telling as BC will be thrown into the fire. In a typical New England manner, the Eagles spend their first 25 games away from home, and the level of difficulty is substantial. The first series of the weekend—a five-game Texas Classic—includes two teams against No. 16 Texas. That is followed by the ACC/B1G Challenge, the Pirate Invitational, and the Madeira Beach Tournament, three mini-tournaments that feature three or more games against quality opponents. This brutal opening stretch should reveal plenty to Obrest, though, and have her team sorted out by the time ACC play returns in the middle of March.

“You want to play the best, that’s why you do this whole thing,” Obrest said on the difficulty of play in the early portion of the season. “Kids want to come to BC and play in the ACC, where you play the best teams in the nation. The non-conference gets us ready for the ACC.”

This story was updated at 5:19 p.m. A previous version had incorrectly stated that Cami Sellers would be the starting first baseman, but she is no longer with the program.