BC Splits With East Carolina and JMU at Rainy Pirate Invitational

Rain threw a wrench in what had originally been a three-game set against the likes of East Carolina and James Madison for Boston College softball, as the Eagles ultimately left Greenville, N.C., with a two-game split. BC knocked off the host Pirates in the series opener behind a dominant pitching performance from Susannah Anderson, then dropped a soggy Sunday afternoon matchup to the No. 18 Dukes.

JMU (4-2) starter Odicci Alexander was nothing short of lights-out against the Eagles (3-7) in the weekend finale, spinning a complete game shutout, as the Dukes rolled to a convincing 9-0 shutout in an abbreviated five-inning affair. Alexander held BC hitless until the final frame, slicing through the lineup with relative ease en route to her 15th career shutout.

The Eagles couldn’t say the same about their pitching staff. Camryn Dolby was unable to replicate her classmate Anderson’s performance from the day prior. In fact, she was tagged for five earned runs and walked six in just three and a third innings of work. Reliever C.C. Cook wasn’t helped by her defense, allowing four runs—none earned—in an inning of work. BC kept it close through three frames, only trailing by one, but JMU scored four runs apiece in the final two innings for a comfortable win.

Hannah File opened the scoring with a sacrifice fly to left field to bring in a run, but it’d take another three innings before the Dukes would get back on the scoreboard. They did so convincingly, chasing Dolby after a two-run home run from Kierstin Roadcap and putting two more runners in scoring position with one out. Cook got a big lineout but wasn’t able to escape the jam, allowing a two-run triple to Alexander.

The bats stayed hot for JMU in the fifth—a frame defined by mistakes from the visitors. Back-to-back throwing errors from BC’s Carly Severini and Gianna Boccagno would bring in runs, then Anderson entered with two runners still on. She hit the first batter she faced, setting up a single from Alexander that brought in two more runs.

The Eagles didn’t have nearly enough firepower to keep up with the explosive Dukes lineup. Kristin Giery managed the team’s lone hit, and it came in the fifth after a leadoff walk from Jules Trevino. A monumental comeback wasn’t in the cards for BC, though, as Severini flew out, Carlie Sanders struck out, and Lexi DiEmmanuele ended the game, fittingly, with a grounder back to Alexander.

In the early going of this season, the Eagles have had their fair of struggles in the circle, as evidenced by Sunday’s poor showing. Replacing the likes of Jessica Dreswick and Allyson Frei was never going to be easy, especially with head coach Ashley Obrest having to turn to freshman arms to fill the bulk of the innings. On Friday night, however, that youth paid off in the weekend opener.

Anderson, making her second start of the year, spun a shutout, striking out four and scattering four hits and two walks. She was backed up by the bare minimum offensively from BC, as Maddison Hamilton beat a throw to the plate on an Ellie Mataya fielder’s choice in the third inning to lift the Eagles to a 1-0 win over East Carolina (8-2).

The Pirates entered having won five straight games, but went just 1-for-11 with runners in scoring position and couldn’t crack Anderson. East Carolina starter Erin Poepping, a sophomore, was handed her first loss of the year in five starts despite going the distance and striking out eight. Poepping only allowed two hits, but one of them—a Hamilton single in the top of the third—proved to be the difference.

Hamilton lined a single into left field to open the inning, and Trevino drew a walk. With two runners on, DiEmmanuele laid down a well-placed bunt to the move the runners over, and Mataya—a freshman who is hitting a team-best .409 thus far—grounded a slow roller to Pirates first baseman Tate McClellan. She opted to go home with the ball, but Hamilton beat the throw to the plate.

The final four innings weren’t without drama, though. East Carolina’s biggest opportunity to tie the game up came in the fourth with one out. Rachel McCollum and Ashley Weingartz strung together back-to-back singles and pinch hitter Morgan Halo drew a bases-loaded walk. Yet Kendra Ziemba grounded one back to Anderson, and she alertly threw home for the second out. A huge strikeout of another pinch hitter, Keira Womack, saw Anderson escape the jam unscathed.

The split weekend is something many might come to expect from this BC team. Playing with a lot of freshman in the starting lineup means you’re more likely to suffer through an up-and-down season, and that was clear in North Carolina. The Eagles managed just one run in 12 innings, which is troublesome considering the inconsistent pitching staff, but Anderson also looked the part of a staff ace—a promising development for a group that that entered the weekend with a 5.82 earned run average, second to last in the ACC. 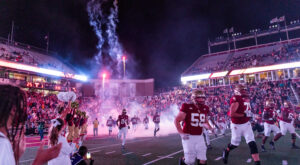