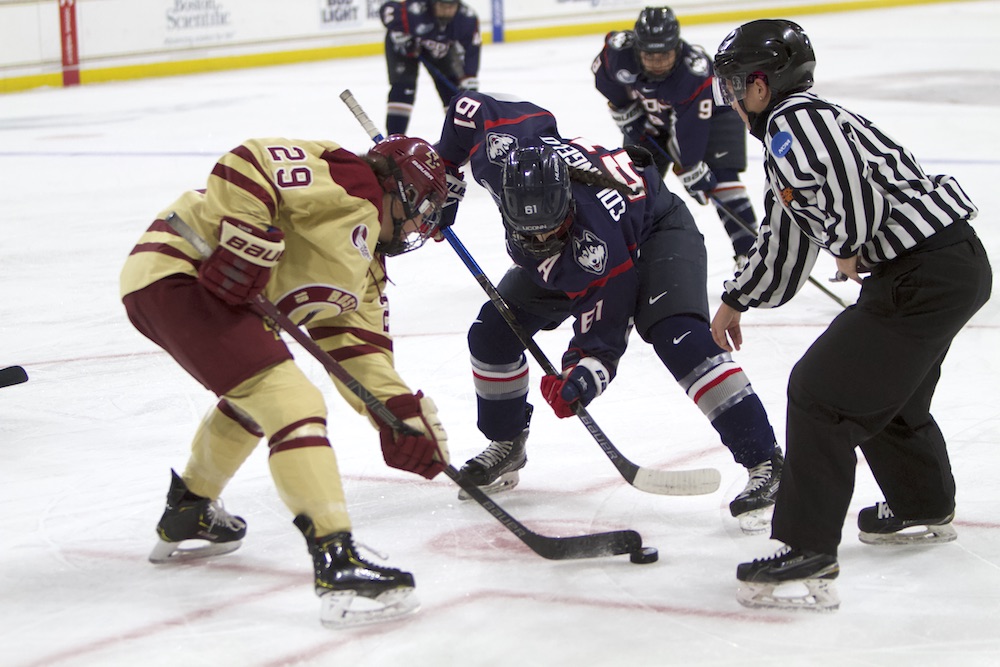 Eagles Pull Away in Third, Take Game 1 of Hockey East Quarterfinals Against UConn

When Boston College women’s hockey secured the No. 2 seed in the Hockey East tournament, it drew a familiar foe in Connecticut. Last year the Huskies—also seeded No. 7—stunned BC in the Hockey East semifinals. Seemingly shaken by the upset, the Eagles proceeded to fall in the NCAA Tournament to Ohio State. It was a disappointing, fully unexpected outcome considering the regular season success BC achieved.

While there was some understandable angst about playing this UConn team in the Hockey East quarterfinals, the Eagles did outscore the Huskies, 10-0, in their three meetings this year. Still, it was clear that BC was a bit nervous in the early going. Neither team scored in the first period, but four different Eagles eventually found the back of the net, propelling the team to a 4-1 victory in the opener of the best-of-three series.

Though BC (25-10-1, 19-7-1 Hockey East) failed to score in the first frame, it controlled the pace of the game. The Eagles piled up 13 shots, compared to the Huskies’ (14-17-4, 9-14-4) seven. On two of UConn’s shots, freshman goaltender Maddy McArthur was forced to come up with big saves. 11 penalties would be ultimately assessed on both teams, but none of them came in the first period. Both the Eagles and Huskies had some good looks on goal, but neither team found a way to score.

“In the beginning of the game, I thought we were a little bit nervous—our pucks were bouncing a little more than we’re used to,” head coach Katie Crowley said after the game.

BC did settle down, though. Two quick penalties on the Eagles’ Caitrin Lonergan and UConn’s Danika Pasqua set up 4-on-4 hockey. Just two minutes into the period, BC struck first as Delaney Belinskas wristed a shot that made its way behind Huskies goaltender Morgan Fisher. Just 40 seconds later, Daryl Watts found an open Kali Flanagan, who tallied another score to give BC a two-goal advantage. Despite having penalties start to rack up on each side, both teams were unable to convert numerous power play opportunities.

Trouble began to emerge in the beginning of the final frame. Both Makenna Newkirk and Megan Keller were called for interference, setting up a 5-on-3 situation for the Huskies. Even though BC lacked its two strongest penalty killers, it did a nice job in fending off the Huskies until the final seconds of the power play, where Morgan Wabick scored for UConn to cut the deficit to one.

For about seven minutes, the Eagles and Huskies traded shots, but McArthur and Fisher both stood firm in goal. The turning point came when UConn’s Emily Reid was assessed a penalty for checking. At this point of the game, BC was 0-of-4 on the power play, but it notched a much-needed conversion as Keller—one of the three finalists for the Patty Kazmaier award—came up big with a long-range goal. In a similar fashion to its scores in the second period, BC kept applying pressure as Newkirk scored just 23 seconds after Keller.

With eight minutes remaining and a three-goal lead in hand, the Eagles had effectively sealed the game. BC killed another one of the Huskies’ power plays, and from there it was smooth sailing to a victory.

BC and UConn entered this matchup under two completely different narratives. The Eagles endured a stretch in which they lost six of seven contests, but ever since Jan. 12, they have only dropped one contest, an upset loss to Harvard in the Beanpot. In that same time span, the Huskies have only notched two wins. This BC team is clearly on the upswing and catching fire at the most crucial time.

“I think our leaders have really stepped up. They know this is playoff hockey … This is one of the tightest teams we have had here,” Crowley said. “They truly care about each other—they want to win for the person next to them. I think it took some time to grow.”

If the Eagles can continue to build their momentum, it’s quite feasible that they can achieve the postseason success that they have always desired. While dropping 10 games in the regular season—double the number of losses from last year—was certainly disappointing, it’s through this adversity that this team has grown and ultimately improved. BC is well-positioned as it faces off against the Huskies on Saturday afternoon. With the way that the Eagles are playing now, they have the ability to make a run in the postseason.

Eagles Fend Off No. 24 Trojans Behind Strong First Half
Fitzgerald Sparks Eagles to Senior Night Win Over No. 9 Northeastern