Home » Offense Falters, BC Blown Out by Visiting N.C. State on Senior Day 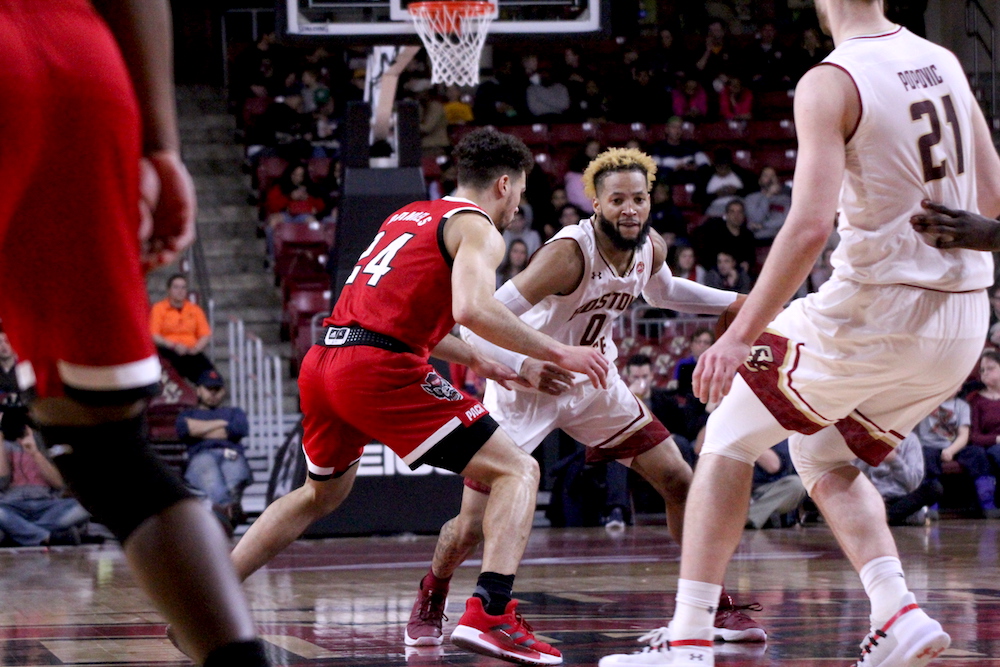 Offense Falters, BC Blown Out by Visiting N.C. State on Senior Day

When Boston College men’s basketball found itself with an early 11-7 lead against North Carolina State, it appeared as if the team could potentially hang with the Wolfpack and record a much-needed victory on Senior Day to build up momentum heading into the ACC Tournament—but that never materialized. In fact, the end result was incredibly disappointing for BC fans, with several Eagles playing in their final game at Conte Forum. BC, like it has most of the season, suffered through injuries, scoring droughts, and inconsistent defensive play in a blowout 73-47 defeat to the Wolfpack.

Injuries continued to pile up, as the Eagles (14-16, 5-13 Atlantic Coast) look to be heavily undermanned going into postseason play. Wynston Tabbs missed his 12th straight contest, and Jared Hamilton was ruled out for the afternoon with an undisclosed injury. Nik Popovic, who has been BC’s most efficient scorer of late, hobbled to the locker room in the second half with an apparent knee injury. Steffon Mitchell also exited the game briefly after attempting to block an N.C. State (21-10, 9-9) shot, which resulted in a collision with Jordan Chatman and a hard fall.

In the opening minutes, the Eagles played fairly well. Popovic looked crisp in the paint, Ky Bowman and Chatman each tacked on points from the charity stripe, and Jairus Hamilton struck from deep. BC didn’t shoot very well from the floor, but neither did the Wolfpack. Through the first five and a half minutes of regulation, the hosts held a four-point edge.

From that point on, however, the Eagles completely collapsed. BC endured a couple of scoring droughts that lasted several minutes each while the Wolfpack found its shooting stroke. With Braxton Beverly and C.J. Bryce leading the way, N.C. State went on a hefty 24-4 run to take a 16-point advantage over a 10-minute span. After taking their early lead, the Eagles were outscored, 34-13, and went into the locker room trailing by 17.

The Wolfpack starters combined to shoot 50 percent from the floor while BC shot south of 30 percent as a team, and unfortunately for Eagles head coach Jim Christian’s side, this only continued in the second half. Just five and a half minutes into the final frame, N.C. State effectively put the game away. To start the half, both teams traded baskets before the Wolfpack put the clamps down. Powered by Bryce, Torin Dorn, Derek Funderburk, and Devon Daniels, the Wolfpack used an 11-0 run to build a 28-point lead.

At this stage, the game was essentially decided. Even though the Wolfpack clearly took its foot off the gas, the Eagles failed to narrow the deficit. Christian trotted out his reserves, including the likes of reserve guard Avery Wilson and center Luka Kraljevic, and they failed to make an impact. BC simply looked demoralized on the floor, as its shots continually clunked off the rim, and the Wolfpack scored with ease. The Eagles finished with 47 points, their lowest scoring output since Feb. 6, 2016.

“I think it was the worst effort we put in all year long,” Christian said.

Ky Bowman struggled in the loss, going 4-of-15 from the floor, but he was the only BC player to finish in double digits, as he tallied 14 points. Meanwhile, six different Wolfpack scorers finished with at least eight points. The Eagles were outclassed in nearly every facet of the game as they connected on only 26.7 percent of their shots—including 15.8 percent of their shots from beyond the arc—and were outrebounded by 20. While BC has displayed grit and has fought to the end in most of its losses, that familiar effort was simply non-existent on Saturday. Besides Bowman and Mitchell fighting for the entire contest, it appeared that the rest of the team simply gave up.

“Everybody should play that way,” Christian said, referring to Bowman and Mitchell’s effort. “Some of our guys have not bought into that yet—all year long—as much as we’ve tried.”

Saturday afternoon’s performance was a fitting way for BC to end the regular season, as the 26-point loss truly encapsulated all of BC’s struggles, which have rendered this team unable to play a full, consistent 40 minutes. There have been several outings—such as Clemson, Virginia Tech, or Georgia Tech—where the Eagles have played well for 25 or 30 minutes and have come up short. Those stretches of strong play weren’t absent against the Wolfpack, and when you factor in the lack of effort you get an embarrassing drubbing.

Luckily for the Eagles, they’ll face Pittsburgh—a team that they beat by eight points earlier this year—in the first round of the ACC Tournament. That may be a favorable matchup, but, with BC lacking any semblance of momentum, there is little hope that it can make a postseason push reminiscent of last year’s run.