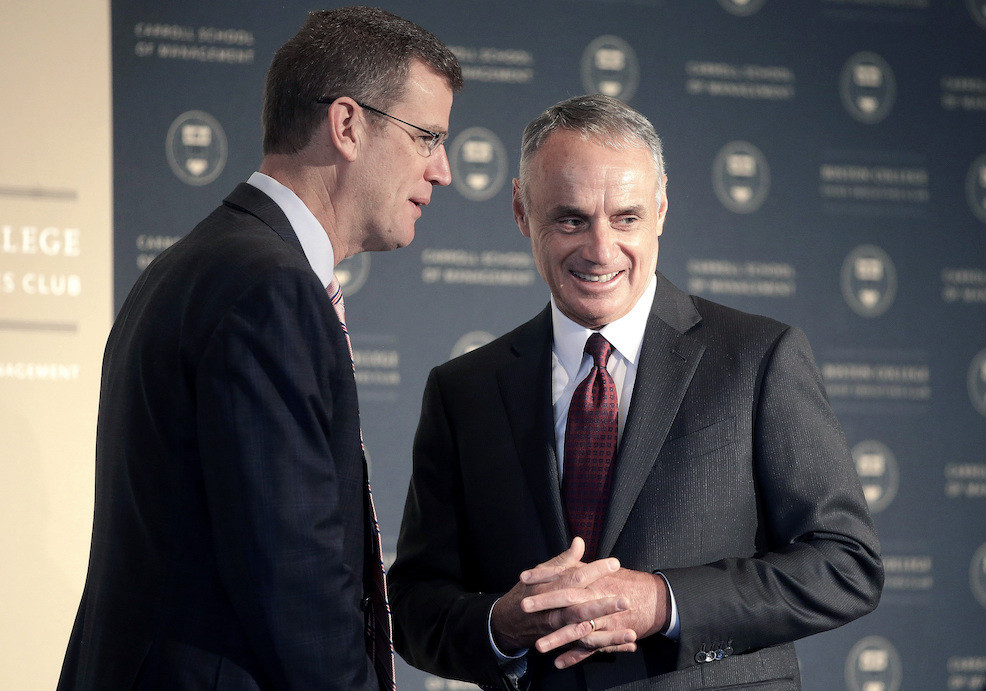 At a critical time in the sport’s lifespan, Rob Manfred, Major League Baseball Commissioner, sat down with Sam Kennedy, president and CEO of the Boston Red Sox, at the latest edition of the Boston College Carroll School of Management Chief Executive’s Club luncheon last week.

To kick the event off, Warren Zola, who serves as a BC professor, the executive director of the BC Chief Executives Club and CGSOM ’96, presented Manfred with a Pete Frates jersey. Frates, BC ’07, is the ALS patient responsible for the #IceBucketChallenge that has raised hundreds of millions of dollars for ALS awareness. It is identical to the one worn by Eagles players at the annual ALS awareness game, and was chosen as a gift for the commissioner due to the issue of ALS awareness being close to his heart.

Manfred went out of his way before the interview began to thank BC for the gift, explaining further what it means to him personally.

“The very first thing that I did literally the first day back after I was elected [commissioner] is about 250 of our employees stood on Park Avenue and took the Ice Bucket challenge,” Manfred said. “It was an important beginning to my relationship with [Team Frate Train]. We ended up making a really great relationship not only with Pete but with the entire Frates family, so thank you very much.”

In a post-speech scrum, Manfred told media members that he couldn’t think of a more meaningful gift he’s received.

Kennedy’s line of questioning began with asking Manfred to detail his journey to becoming the most powerful executive in baseball. Manfred explained that he was a lifelong baseball fan—Kennedy noted that Manfred is the first MLB commissioner to have played little league baseball. His law career happened to lead him back to his boyhood passion, beginning around 1989 as he worked on labor negotiations. He categorized himself as “the last lawyer standing,” as he for consulted with MLB owners during the ’94 strike.

Once Bud Selig was elected commissioner, Manfred decided to make the jump to work under the man who would go on to be one of his closest mentors. Manfred credited his predecessor with allowing Manfred to “broaden his portfolio” beyond being just the labor ace. Twenty years later, the mantle was passed from Selig to Manfred.

“[Selig] spent a tremendous amount of time over the years helping me understand the management of 30 owners, 30 bosses,” Manfred said. “He had a unique advantage … that he came from the ranks of ownership, and learning how he handled the group I think was important.”

Manfred noted that he still talks to Selig once a week to take his temperature on the various issues the MLB faces on a day-to-day basis.

Manfred categorized working with the Trump administration as “different.” He also described it as more of a challenge, specifically citing some trying moments as baseball tried to hammer out an agreement with Cuba to give the country’s inhabitants a chance to play baseball in America without having to defect. On the other hand, Manfred said the MLB still works closely with the Trump administration on a number of issues, and the administration has been “receptive” to MLB concerns with tax legislation.

The commissioner has concentrated on open communication between his office and the concerns of his constituents—MLB owners—and he said he believes it’s made his job far easier. On the other hand, disciplining teams, owners, and upper-level MLB executives is “a really, really, hard part of the job.”

Manfred also talked about the MLB’s move to acquire regional sports networks from ESPN in the wake of Disney’s acquisition of the majority of Fox’s assets. He described the timing of the forced sale as “difficult,” since buyers outside of the MLB which Manfred would have been happy to see acquire regional networks and rights to MLB games were disqualified from the bidding for one reason or another. That left Manfred and the MLB owners with a choice to partner with private equity groups they weren’t as thrilled about working with—private equity firms’ short-term nature wasn’t something Manfred and his partners were excited about—or bidding for regional networks themselves.

Manfred and Co. decided that it was smarter to invest in the regional networks, where much of MLB teams’ annual revenue comes from, to ensure fans get a chance to watch games. A byproduct is getting more buy-in from teams in the central organization of the MLB. Manfred noted how happy he was to negotiate with Bob Iger, Disney’s chief executive, who Manfred “couldn’t say enough nice things about.”

Manfred offered his thoughts on the labor negotiations that have made national news lately because of MLB players’ current dissatisfaction with the state of free agency. To Manfred, the situation is similar to where baseball stood in the mid-90s when labor peace was far from the norm like it has been lately: Constantly changing leadership at the top of the MLB Players’ Association (MLBPA) has led to frustration among players.

In the ’90s, it was the commissioner’s office that was in upheaval. Selig and Manfred brought stability, and, from that, labor peace. Manfred said he still believes in the current free agency system, noting big contracts for Bryce Harper and Manny Machado had brought spending this past winter in line with previous years of free agency. Now, the issue to Manfred is that the middle and lower class of MLB players aren’t getting paid as much, while superstars are paid more than ever.

At this point, the commissioner is looking to hear from the MLB Players Association about how it would like wage distribution reorganized.

Kennedy closed out the afternoon by asking Manfred about his beliefs on how to grow the game of baseball through international play, improved diversity, as well as inclusion efforts in management and among the executive class of major league baseball.

Manfred and Kennedy both noted that though 35 percent of players who take the field every season are from outside the United States, there aren’t nearly enough people of color who can relate to the different populations making up the teams serving in leadership positions in the MLB. Manfred also said that the fact that only 8 percent of players are black is a serious problem that needs to be dealt with on a grassroots level.