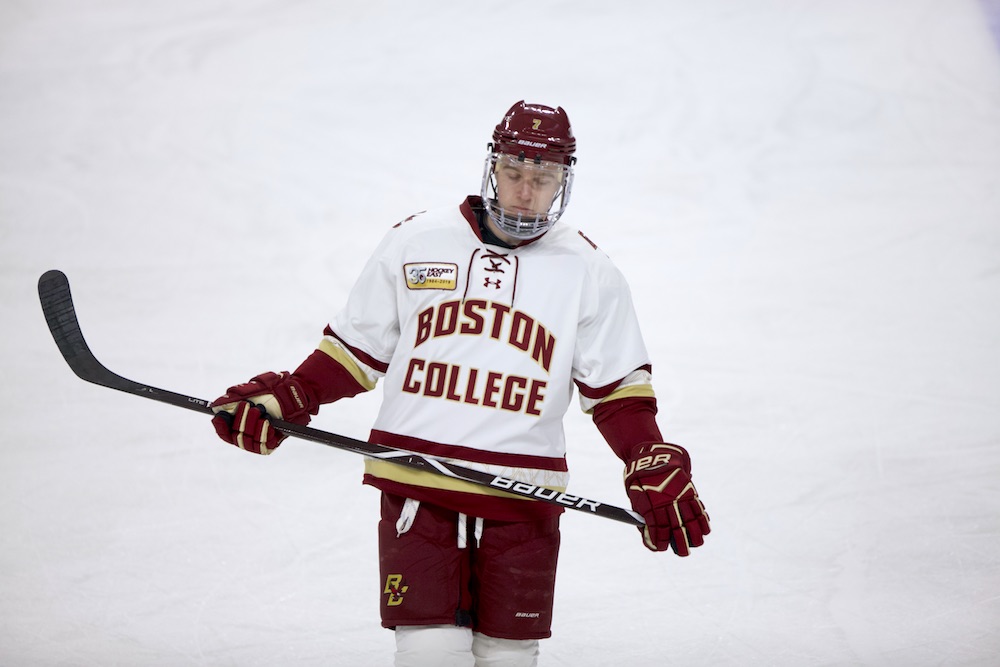 Eagles Blow 3-1 First-Period Lead, Fall to No. 7 Providence in Overtime

The game was all tied up when the final buzzer sounded, and despite losing an early two-goal lead to No. 7 Providence in the first game of the Hockey East quarterfinals, Boston College men’s hockey displayed impressive resilience on the road, peaking with Julius Mattila’s game-tying goal at 1:44 in the third period.

Overtime seemingly opened up with all of the momentum on BC’s side—the Eagles were looking to compensate for their underwhelming season, one of their worst in Jerry York’s 25-year tenure. All eyes were on Tyce Thompson of the Friars, who came down on the rush roughly a minute into the extra period. He ripped a wrist shot off Eagles goaltender Joseph Woll’s right pad, and the ensuing rebound bounced out to the left circle, perfectly setting up Brandon Duhaime to blast the puck past Woll.

Just a minute and a half into the overtime period, BC found itself on the losing end of yet another close matchup, falling, 5-4, in the first game of the best-of-three series.

From the beginning, the stage at Schneider Arena was set for a thriller, as the two teams were a week removed from a game that wasn’t decided until the third period. Although the Eagles (11-21-3, 10-11-3 Hockey East) had plenty of regular season struggles—they entered the night as the No. 7 seed for the first time since the 1993 tournament—they had some success against the Friars (22-9-6, 14-7-3) squad, taking two of the three regular season matchups. Providence, on the other hand, entered leading the Hockey East in defense (1.86 goals allowed per game) and third in offense (3.14 goals per game). The game trended toward the latter, though, as it featured nine combined goals and a plethora of shots on goal.

The match was marked by fast pace and electrifying offensive opportunities on both sides of the ice, as both teams wasted no time getting on the board. Less than two minutes after the opening face-off, Providence forward Matt Koopman’s pass deflected off Vimal Sukumaran’s skate and ended up taking a lucky bounce past Woll inside the left post. The goal was initially called off on the basis that Sukumaran intentionally kicked the puck past Woll, but, after video review, this was deemed inconclusive, putting the Friars up, 1-0, early on. Yet it took the Eagles no time to respond.

Just 30 seconds after the opening goal, Michael Kim’s shot from the center point was blocked in the slot, perfectly setting up Marc McLaughlin’s forehand wrist-shot strike, which beat Friars goaltender Hayden Hawkey just inside the right post. The Eagles did not slow down after tying the game, though, quickly ramping up pressure in an excellent opening period. At the six-minute mark, Christopher Grando snuck a bouncing puck through Hawkey’s pads. Then, just two minutes after, Zach Walker pitched a nifty one-handed pass to Kim on the weak side, who fired the puck past Hawkey short-side. The Eagles maintained the most infamous lead in all of sports, a 3-1 advantage, for the majority of the first two frames.

Scoring-wise, the second period was much quieter than the first, but it was scrappy nonetheless. Both teams were given two power-play opportunities—the Eagles saw Connor Moore and David Cotton commit interference and tripping infractions, respectively, while the Friars had Shane Kavanagh and Greg Printz both get minors for slashing—but neither was able to capitalize. It wasn’t until the final five seconds of the middle period that Providence was able to score, as Jacob Bryson’s backdoor pass was followed up by a tip past Woll from Spenser Young, cutting the deficit to one heading into the final period of regulation.

The Friars continued the trend of quick goal scoring, tying the game up four minutes into the third frame. Jack Dugan faked a shot and found Young wide open on the left side, allowing for an easy second tally on the night. Then, despite some terrific offensive opportunities by the Eagles, Scott Conway sneaked behind the BC net and flicked a pass into the slot, where Vincent Desharnais snuck a one-timer through Woll’s five-hole—and the Eagles had fully blown their 3-1 lead.

The final few minutes of regulation had fans on the edge of their seats. After a York timeout, BC pulled its netminder with 1:44 remaining on the clock—a decision that quickly paid off. Just eight seconds after the break in play, Mattila located a loose puck amid a scramble in front of the Providence net, jamming it home to tie up the score and eventually force overtime. That was when the Friars escaped with the win, though, as Duhaime’s goal ended a thriller of a game and pulled them within a game of TD Garden and the semifinals.

Even though Mattila’s late goal inspired confidence that the Eagles would rally to avoid the painful fact of blowing a convincing early lead, it ultimately didn’t pan out and BC missed a tremendous opportunity to strike first in the series. Winning two of three on the road as a lower seed is already a hard enough feat to pull off, and the Eagles now face back-to-back elimination games against the second-best team in the conference. York will need to rally his team to put in an inspired effort on Saturday night, as otherwise a dismal season will sputter out via a first-round sweep.