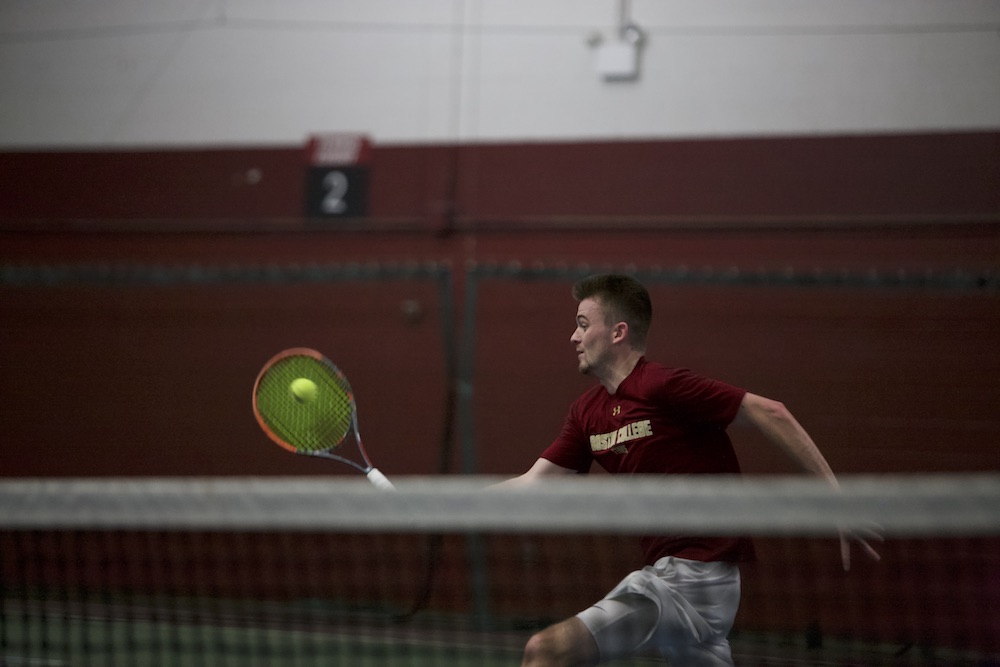 In the middle of February, Boston College men’s tennis was a game above .500 but had dropped its first two conference contests by a decisive combined margin of 13-1. All signs pointed to another rough year in ACC play—the Eagles won just one of their 12 conference games last year—and that has held true in the last month. On Saturday afternoon in the front end of a two-game Florida trip, that pattern was on full display as Florida State handily dispatched BC, winning, 7-0, in dominant fashion.

Lucas Poullain and Bryn Nahrung—an unusual pairing of a redshirt senior and a freshman—kicked things off for the Seminoles (12-5, 2-2 Atlantic Coast) by beating the Eagles’ (4-7, 0-4) duo of Chris Grasel and Max Palmer, 6-3. Sebastian Arcila and Juan Martin Jalif then clinched the doubles point on the first court, dispatching Derek Austin and Sean Mullins by a 6-4 margin.

Austin and Mullins went 3-3 in conference play last season, but the pairing is off to a winless start through four games. They didn’t fare much better in singles play against FSU, with Austin dropping a 6-3, 6-2 decision to the nation’s No. 99 player in Poullain, while Mullins claimed the first set against Arcila in fifth doubles but then dropped back-to-back frames.

The rest of the Eagles’ lineup largely couldn’t keep up against the Seminoles, either. Poullain, who is 9-1 on the year, saw his victory followed by a move indoors due to rain. There, Richard Thongoana swept by Grasel, winning 7-6, 6-1, and Jalif followed with a comfortable game-clinching straight set win over Markus Norby.

FSU, ranked 41st in the country, polished off the sweep with Chase Wood, Enzo Le Seguillon, and Arcila winning in singles. Wood and Le Seguillon both needed superbreakers to get their victories, knocking off Max Mendelsohn and Conor Mullins, respectively. Arcila’s was similarly dramatic, as he fell behind, 6-3, before winning the last two in a comfortable 6-1, 6-4 manner.

The going doesn’t get any easier for the Eagles, who’ve limped to four straight losses and haven’t registered more than two points in any of them. Next up is a date with Miami on Sunday—the only conference opponent that BC beat last year—but don’t expect a similar result. The Hurricanes have taken a step forward in 2019, as they’re off to a perfect 4-0 start in ACC play. Most recently, Miami eked out a 4-3 win over No. 11 Notre Dame and boasts a four-game winning streak that started with a clean sweep of the Seminoles.