A packed Gasson 305 erupted into a “No more men!” chant—prompted by Maya Rao, MCAS ’21, and quickly adopted by Graysen Parish, MCAS ’22—at My Mother’s Fleabag’s Spring Café on Thursday night. The moment of communal candor epitomized the shameless and often absurd brand of humor with which Fleabag entertains its audience, a comedic style that can cause one to unquestioningly betray his gender for the sake of landing the joke—and oh, did it land.

Fleabag’s Spring Café consisted of a number of improv games that relied heavily upon crowd involvement, and unlike the classes that take place under the oddly ornate ceiling of the Fulton Room by day, the attendees were more than willing to raise a hand or volunteer an answer to an open-ended question. The freeze game warmed up the crowd, as the basis of the game is that Fleabaggers will go through an improv skit with the added pressure of being “freezed” and swapped with other members of the comedy troupe. A highlight of the game came when Rao assumed the role of a bank robber who boasted about her loot on Instagram.

Laughter erupted later in the night when Nick Edel, MCAS ’19; Ari Malliaros, CSOM ’19;  Brendan McGinty, MCAS ’20; and Maqui Bernava, MCAS ’22, took part in a game in which the cast members had to run on or off stage when a specific word, such as “eel” or “skill” was said by another actor in the skit. Eventually, Malliaros and McGinity switched off working Edel’s trigger word “eel” into the dialogue to keep him running back and forth and, perhaps even funnier, fishing for excuses to leave or re-enter the scene.

“I left my car in drive,” Edel frantically screamed at one point in the skit.

Edel later got back at McGinity when introducing a game that required two crowd members to feed McGinity and Mike Bamford, MCAS ’20, random lines during the bit.

“Fleabag is entirely scripted and Brendan and Mike are the worst at remembering their lines,” Edel joked when explaining the premise of the game.

Throughout the brief one-hour show Fleabag members showed off a distinctive flexibility in comedic style, easily transitioning from the asinine to the academic (yet accessible). Parish earned snaps from the crowd when he declared that “Aristotle was one of the best philosophers of all time” during a game with Sam Harmon, MCAS ’21. Later in the game, Aristotle’s teachings about love served as the basis for a proposal, one that Harmon answered with “I’m going to accept but it’s going to be platonic.”

Malliaros crafted a long-running joke about a play that deals with laissez-faire economics and the principle of the invisible hand, while Tom Mier, MCAS ’19, gave ample exposition about the “Fiddler family” before getting to the Fiddler on the Roof punchline in the final game of the night, “185 plays walk into a bar.” If comedy doesn’t work out for the group, the members of Fleabag have certainly gotten the most out of their liberal arts education. After a strong showing at its Spring Café, however, it’s likely comedy will continue to work for My Mother’s Fleabag. 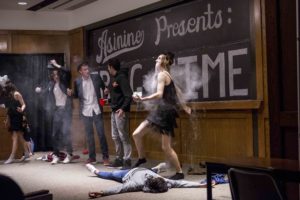