Carolina Tiru, MCAS ’20, was awarded the 2019 Oscar A. Romero Scholarship at an awards ceremony Saturday night. Hailing from Puerto Rico, Tiru was awarded the scholarship for academic excellence, as well as significant involvement within the greater Latinx and Hispanic communities—Tiru has become involved with the Latinx community at St. Ignatius Church. That involvement inspired her to create a program called “Creando Sonrisas,” or “creating smiles” in English.

The initiative supports The Campus School and parishioners at St. Ignatius.

“I look at you [three] and I see individuals who have been engaged in helping advance the cause of Oscar Romero in our time,” University President Rev. William P. Leahy, S.J., said as he presented the award.

Tiru began her acceptance speech by thanking her family, beginning with her tireless mother—Tiru said it was her mother’s work that put her in the position to be at Boston College in the first place.

She then went on to describe what the award personally means to her.

“The violence of love that St. Oscar Romero preached is always within us. We just have to be courageous enough to let it show. … I invite you, I summon you, I implore you, as St. Oscar Romero once said, to preach that same violence of love with me. … Let us fight for our people, the people of the world. It is an honor to have received this award, and I can only hope to carry on Romero’s mission for the rest of my life.”

In addition, Lourdes German, a Portico faculty member and BC ’01, was awarded the 2019 Rev. John A. Dineen, S.J., Hispanic Alumni Community Service Award. The honor is given to a member of BC’s alumni who represents the ideals of Romero and the commitment and leadership of Dineen—a charter member of the scholarship’s board—to the Latinx and Hispanic communities.

German has represented governments and investment banks in public finance transactions as an attorney before creating a division within Fidelity Investments that deals directly with public finance before going on to focus understanding the financial sustainability of regions of the United States, Europe, Latin America, and China. She’s served as an expert adviser to Congress and the United Nations as well.

There were three nominees in the running to receive the Romero Scholarship, all of whom received full textbook scholarships from the BC Bookstore regardless of whether they were awarded the scholarship or not. Vanessa Ruiz-Wiarco, MCAS ’20, and Diana Hernandez, Lynch ’20, were the other two candidates for the scholarship.

The scholarship’s namesake, Romero, was canonized as a saint last October, nearly 40 years after he was assassinated while celebrating Mass on March 24, 1980.

Rosemary Concepcion, one of the winners of the 2014 Romero scholarship and BC ’15, served as the master of ceremonies for the night, which also paid tribute to Brazil: Brazilian cuisine was featured and drum-group Grooversity played Brazilian music on three occasions during the event.

Eve Spangler, an associate professor within the sociology department, was the faculty member chosen to introduce Tiru. Spangler, who has taught Tiru and described her as a “delight” explained that Tiru was raised by her mother, father, and two sisters—one of whom Tiru would later reveal is severely affected by epilepsy. Spangler revealed that Tiru is determined to become an immigration lawyer to “help undocumented families fight for equality.”

German, who hails from the Dominican Republic, emphasized that what defines her as a person is not her extensive resume but watching her mother work: She was as a substitute teacher during the day before arriving home, taking care of her children, and working with them on their homework. After putting them to bed, she’d begin her own studies—German’s mother managed to put herself through community college in her spare time.

She also cited her experience learning under Spangler, who taught her about social theory during German’s freshman year. The class opened her eyes to the world and the larger society she was on the verge of entering. It was through learning from mentors, such as Spangler, that German said she believes is what taught her what type of human she wanted to be.

Jorge Mejia, last year’s Romero Scholarship winner and MCAS ’19, offered remarks just prior to the award being presented to Tiru. He said that his year as the Romero scholar had caused him to reflect on how his life changed after he won the award. Mejia noted that he still thinks about what it means to be finalist for the scholarship at a deeper level.

He explained that being a finalist showed him how sturdy his support system at BC is, describing the ceremony and his mentors as the ideals of true love, before urging this year’s finalists to remember the night as one where they discovered what it felt like to be truly loved. Mejia went on to note that, though the scholarship is named after a martyr, that doesn’t mean Romero scholars are supposed to go out and do something that changes the course of history.

“But what it does mean is you need to exceed your personal potential and leave a legacy behind that is scalable and sustainable,” he said. “My new motto, to really enhance my personal potential, is ‘Live comfortably uncomfortable.’”

Leahy agreed, noting that Romero once said each individual has their own “individual greatness.”

“Each of us has talents, each of us has gifts, and, as Jorge urged us, there is a call to each of us to live out that potential, that greatness—provide that example,” Leahy said.

leahy Romeo Scholarship Carolina Tiru University President Rev. William P. Leahy Tiru
Jay Tells Students How to Make the Most of Their 20s
Garcia Discusses the Nature of Trade in a Globalized World 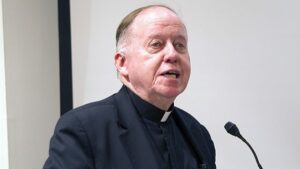