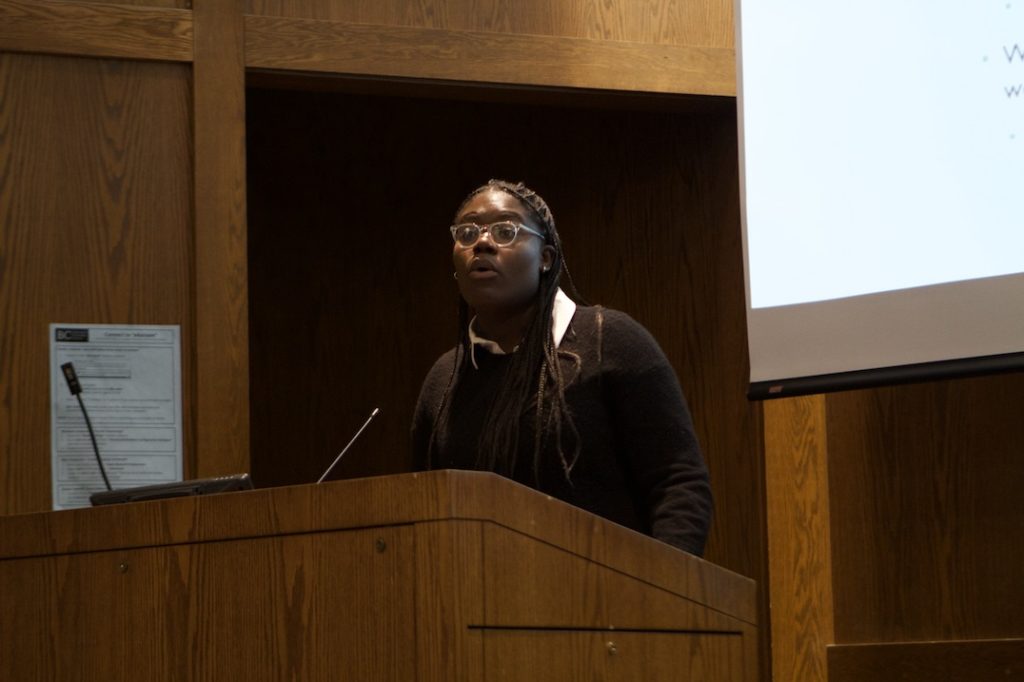 “We’re excited to have a Amaka on our team,” said Michael Osaghae, UGBC president-elect and MCAS ’20. “She’s a great leader, very thoughtful decision-maker, very clear, doesn’t let details pass by her. She’s really deliberate in how she leads a team, but also manages groups of people effectively towards a goal. And I know she’ll do that in this role.”

“It’s mostly a support, guidance, delegation, [and] managerial role, as well as working with the president and [executive vice president] as they work with administrators … as we work on different advocacy, social justice work on campus,” Nnaeto said. “I think it changes with whoever holds the position and how they choose to lead that space.”

One of Nnaeto’s goals is to help each council maintain continuity as it overturns the people in its leadership roles. She said this year’s GLC chairs—Chris Ramirez and Symone Varnado, both MCAS ’19—have done a phenomenal job with planning intersectional programming, as well as being collaborative, hands on, and receptive to feedback, and she wants to make sure that their mindset gets passed on to their successors.

“With the Diversity and Inclusion Programming Board, I’m in that role currently, so I’ll be really able to support whoever is taking up that space, and make sure that a lot of the ideas that were generated this year, the mistakes we made—all of that—are translated and that person feels supported in that role,” Nnaeto said.

Another one of her goals is for there to be continuity in the diversity and inclusion programming itself. She said she hopes to start speaker series, in which different speakers would visit campus over the course of a year or semester and talk about the same topic, such as queerness in higher education. Nnaeto said that often she will go to an event and learn a lot, but then the next day, it feels like the conversation has ended.

“Keeping those conversations going, and just [having] better continuity of ideas, I think that’s my goal and my hope for it,” she said.

Nnaeto said she hopes to provide support for CSD, the youngest of the Diversity and Inclusion councils, and to help it get its name out more. She said she thinks it would be a good idea to shift some of the mental health advocacy work being done in UGBC from Student Initiatives to CSD.

“[Mental health advocacy] does have to do with ability, and I think that would be a great way for them to reach out to more students on campus,” she said.

Nnaeto said she is also looking to have a hand in BC Core Renewal process, as UGBC has been pushing for the University to rethink what it means for courses to be tagged as Cultural Diversity for a long time. She particularly wants to make sure these courses are intersectional and don’t only deal with cultural diversity through a Eurocentric lens.

Nnaeto also hopes to use the results from the Student Experience Survey the University conducted last semester to improve the work being done by the Diversity and Inclusion councils.

“A lot of the times you want to push for change, you need to have the concrete evidence that people are feeling the ways that they’re feeling,” she said.

Nnaeto pointed out that, while people can try to individually tell the University that their identities don’t feel supported on campus, survey results allow BC to examine how students answered questions about whether they feel BC is home for them by race, gender, and socioeconomic background.

“So I can say, well … [of] the 30 percent of people that did say they don’t feel supported when they come to Boston College, 90 percent of them [identified as] X—so clearly, you’re not supporting this specific identity,” Nnaeto said. “So using that data, and having a better understanding and a breakdown of who’s saying what in a very concrete manner, I think would be really helpful.”

Nnaeto, who is on the DiversityEdu task force, also said she hopes to take the concepts the module touched on and bring them to other places on campus. Nnaeto said that DiversityEdu was a necessary first step, but the resounding response from students was that while it filled some voids, it didn’t do enough.

“These types of conversations can’t be a one-off module,” Nnaeto said. “[I’m] trying to find different ways to continue those in the classroom, in the residence halls, across the four years.”

She pointed out that as only freshmen will have to take the module next year, it’s not going to be on the forefront of everyone’s minds as much, so she is looking for ways to continue the conversations about the ideas the module touched on. Nnaeto said that, in addition to helping these conversations continue in the classrooms, she wants to help make students more aware of the diversity of courses that BC offers.

“There’s so many amazing classes, that talk about so many rich and diverse subjects,” she said. “Let’s say I’m a bio major, and they’re in the English department, when I’m signing up for courses, I’m never, like, scouring through the English department … so finding different ways to make those more available and maybe … bring them closer into the core.”

Nnaeto said that, overall, she is excited to take on the role of DDI and all of the ups and downs that are going to come from it, and she anticipates that the journey will be a learning experience.

“Mike and I and Tiff [Brooks, UGBC vice president-elect and MCAS ’21] with our experiences … are going to take all those—as well as reach out to people that have been in these positions before us—and try to just be really in tune with the campus and understand what they need and do our best to fulfill that,” she said.