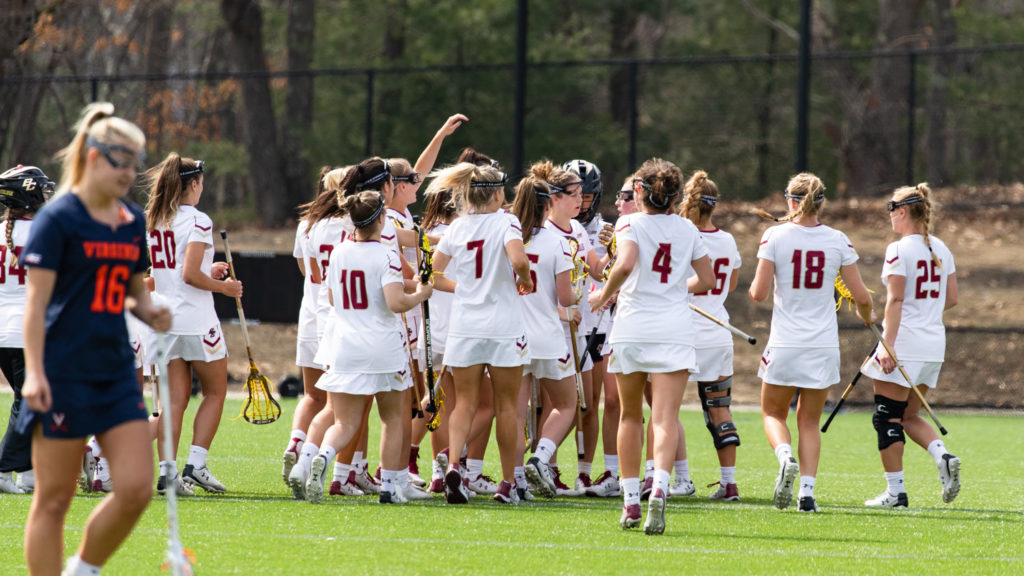 With the victory, the Eagles remain undefeated. They beat their fourth consecutive ranked opponent and their ninth overall ranked opponent this season. They scored at least 20 goals for the sixth time this season. Sam Apuzzo, ranked first in the country in points, goals, and goals per game, added four goals and three assists to her season tally. Kenzie Kent, ranked third in the country for points, contributed three goals and five assists. Dempsey Arsenault led the team in goals, with five, and also contributed one assist in the victory.

But did you know any of that? Quite frankly, it’s incredible that BC Athletics doesn’t do more to showcase its best team.

If you don’t seek the program out, it’s easy to be in the dark about just how good of a season BC is having right now. The Eagles, playing in the toughest lacrosse conference in the country, have outscored their ACC opponents, 77-50, over the course of the season. Each one of those ACC opponents is nationally ranked. BC also knocked off non-conference opponents who figure in the national rankings, like Southern California, Navy, Northwestern, and Georgetown. And in Saturday’s win over Duke, the Eagles limited Charlotte North—the Blue Devils’ most dangerous scorer who entered with the third-most goals in the country—to just one goal and zero assists.

If it feels like I just threw a bunch of numbers at you, it’s because I did. There isn’t really a better way to list all of the team’s accomplishments. The Eagles are playing out of their minds this season. But that should be no surprise for BC fans. After all, the Eagles have been national runners-up for the past two years after successful regular season and playoff campaigns. Apuzzo won the Tewaaraton Award last year, marking her the best women’s lacrosse player in the nation in 2018.

But, in spite of all that, it really feels like BC Athletics could be doing more to publicize its lacrosse program. I mean, imagine if football or men’s basketball had that level of success. BC Athletics would be talking about it left and right—rightfully so—and students would never hear the end of it.

Think about last week alone. BC Athletics sends out regular “This Week on the Heights” emails highlighting all of the games students can attend in the week ahead. That seems to be its primary method of advertising games to students—any other marketing campaign relies on students going out of their way to follow BC Athletics on Twitter or other forms of social media, while the emails go to all students.

Last week’s email listed football’s Jay McGillis Memorial Spring Game first and baseball’s slate of games second. Lacrosse came third out of four sports on the email, even though it was defending its undefeated campaign against two ranked conference opponents. And though the matchup against Duke was the Red Bandana Game, there was no separate email to let students know about it. There was, however, a separate email advertising football’s Spring Game.

Listen, I get it. I understand that lacrosse isn’t one of BC’s revenue sports, and football is. But I think there is absolutely no reason why the spring football game—an out-of-season intrasquad scrimmage that, historically, has been less-than-exciting—should get top billing in the weekly email over an undefeated, No. 1 lacrosse squad, or should get its own separate email when the Red Bandana lacrosse game does not. Especially because the Spring Game was played with a modified scoring system this year and featured limited action from the program’s biggest names. And there’s the fact that, well, it’s actually lacrosse season. Why should football outshine lacrosse during lacrosse’s own season? Hasn’t lacrosse earned more than that?

I reached out to BC Athletics before writing this column, and it responded with some fair points. For instance, BC Athletics does make the home games available to watch online via live stream. When BC hosts the ACC Championship later this spring, all of the teams will be able to use the Fish Field House to practice, and the games will be played at Alumni Stadium—which will likely lead to increased attendance to games among sophomores, juniors, and seniors who don’t always make the trip over to Newton. And in the summer following the 2017 season, after lacrosse head coach Acacia Walker-Weinstein wanted another assistant coach, Director of Athletics Martin Jarmond hired Kayla Treanor. So yes, it’s not like BC Athletics commits nothing to lacrosse—but I still think lacrosse has earned more attention than it has received.

Take the facilities, for example. The Eagles’ home field is on the Newton campus—home to only about 900 or so undergraduate students. The field itself is nice, but the locker rooms are literally trailers. And there aren’t even bathroom facilities by the field. Fans and players—home and visiting alike—all use a row of Porta-Potties. How is it possible that BC Athletics can renovate every locker room under the sun on this campus and put in perks like the fueling station, but lacrosse can’t even get real locker rooms and bathrooms at its home field?

Imagine coming from other top programs and seeing that BC doesn’t even have a proper bathroom for its lacrosse team. Imagine being a recruit comparing facilities at other top programs with BC’s facility. Sure, BC has the most dominant women’s lacrosse program in the country right now—but if it wants to keep landing the best recruits, it has to build facilities that can rival the best schools in the ACC and Big Ten.

There are two regular season home games left, followed by the ACC Tournament and then the NCAA Tournament. Enhancing the facilities isn’t a quick fix—though it absolutely should be a priority—but BC Athletics can and should step up its promotion of the remaining games. It can easily send out multiple stand-alone emails to students to advertise the game against Yale and the Senior Day matchup against ACC foe Louisville. That maximizes the probability that a student will find out about it—it’s easy to gloss over the “This Week on the Heights” emails, but a special email highlighting the undefeated lacrosse team is more likely to grab students’ attention.

Lacrosse is in the midst of a historic season. Every student on this campus should be aware of the team’s success and its individual players’ accomplishments. Honestly, there’s no reason why the likes of Apuzzo, Kent, and Arsenault shouldn’t be household names on campus. It’s time for BC Athletics to shout it from the rooftops.