Some people run for their health. Others, for the thrill of the competition. But Emily Rayball, Lynch ’19, runs not only for her own self-care, but also to empower herself and other young women around her.

When she’s not studying, working one of her many on-campus jobs, or training for the marathon, Rayball spends her spare time mentoring her residents in Kostka Hall, Boston College’s all-female dorm. So, when she was looking for charities for her marathon run, she immediately remembered Girls on the Run, a youth-development program that uses running to help girls cultivate healthy lifestyles and attitudes. The organization is close to Rayball’s heart, as it’s where she began her running career as a child.

Rayball’s running journey began in elementary school when her parents signed her up for Girls on the Run. The after-school program teaches girls in elementary and middle school about subjects, such as body positivity, self-esteem, responsibility, achievement, and success—all while preparing them for a 5K run.

Initially, she wasn’t too excited about running in the constant heat of Texas. But since most of her friends from Holy Trinity Catholic School—a K-8 school in Grapevine—were also involved in the program, she grew to look forward to her time there.

By the time she reached Nolan Catholic High School, her three younger sisters—who are now ages 14, 15, and 17—joined Girls on the Run, and she volunteered to coach them. Rayball was tasked with leading discussions on the aforementioned topics, as well as organizing games and workouts. During Rayball’s volunteering, she saw the girls motivate one another to succeed and gain a stronger sense of accomplishment after they completed the 5K at the end of the program.

“They really get to see the tangible effects of all of the things they’ve learned about,” she said.

Rayball stopped running after finishing Girls on the Run in eighth grade, but after moving to Boston for college, she picked up the sport again the summer after her sophomore year when she received an email from the Dana Farber Cancer Institute. She’d volunteered with the organization before, and its representatives had reached out to ask her if she would join their team for the Boston Athletic Association (B.A.A.) Half Marathon.

At the time, Rayball felt overwhelmed by her busy schedule and her work as an Orientation Leader (OL), and she decided that running would help her maintain a healthy lifestyle and clear her mind from the stresses of the day.

Rayball didn’t tell anyone she was running the half marathon. Even her parents had no idea until October 13th, the day of the race.

“The morning of the half marathon, I texted a picture of me wearing my bib at the start line to my parents,” she said. The text read, ‘By the way, I’m doing this!’”

Her parents, naturally, were shocked, believing that Rayball had stopped running altogether.

After that first race, Rayball decided to recommit herself to the sport she had been away from for so long. When the race ended, she met a group of people who were participating in the B.A.A. Distance Medley, which is comprised of three races—a 5K in April, a 10K in June, and a half marathon in October.

After completing the 5K and 10K before the end of the year, Rayball found herself thinking, “Why should I stop there?” She then decided to challenge herself to complete the Boston Marathon.

“Really, it was just me being overly ambitious,” she said.

With her many roles on campus, Rayball is no stranger to ambition. For the past two years, Rayball has been working as a Resident Assistant (RA) in Kostka—an experience she says has shaped her time at BC.

“Being able to be there with [my residents] for the highest highs and the lowest lows has been a really humbling and positive experience for me and something that I really enjoyed,” she said.

While she’s loved her various roles on campus—including leading Kairos, a weekend Catholic retreat for high school and college students, and working as the Director of Campus Engagement on the Campus Activities Board (CAB)—Rayball values her runs because they allow her to focus on herself.

“I started running more on my own terms, because I wanted to have space to prioritize myself,” she said. “Running was a way that I could take care of my body, take care of my mind, and just have some headspace to get away from campus. … I think that was something that I really needed to learn, especially then.”

Despite the training, Rayball still wouldn’t call herself a runner. She thinks of running as something that she does for recreation, rather than something that defines her. Now in her senior year, she hopes that running in the place of the people she used to watch will be a fitting culmination of her BC experience.

“I’m going to be able to run past this place that I’ve called home for the past four years,” she said. “I’m super sentimental about the whole thing.”

Rayball’s excitement surrounding the marathon was slightly curtailed, due to the intensity of her mileage. Four weeks ago, as she was starting an 18-mile run, she developed shin splints—every runner’s enemy. The injury came at a critical time, and Rayball had to take a break for several days, missing the Boston Last Long Run—a city-wide tradition for marathon trainees.

“It’s a big bummer because 4,000 people do the 20-mile run, so seeing all of the runners out that day was sad—I wanted to be there, too,” Rayball said, determined to reach her goal. “I will be at the starting line, and we’re gonna get there.”

Sometimes, during her runs up Heartbreak Hill, she sees the spires of Gasson Hall and starts to get teary-eyed. She thinks of all of the people who have supported her, including her mom, whom she always calls after a long run, or Elizabeth Wollan, MCAS ’19, who is one of the many friends who can’t wait to cheer for Rayball at Mile 21.

“[Emily’s] a very strong, empowered woman who has really lived out her mission at BC to inspire and empower other women around her,” Wollan said. “She’s really a girl who practices what she preaches. I can’t wait to see her take on this new challenge with the same … commitment to the community that she has demonstrated throughout her BC career.”

Additionally, Rayball’s parents and three younger sisters will be making the trip from Texas to watch her run and to meet her at the finish line. The last time they all were on campus was in October of 2015—Parent’s Weekend of her freshman year.

For Rayball, who is deeply committed to service, taking time and space for herself was challenging at first. But, despite the painful setback of shin splints, Rayball is committed to finishing what she started—both for herself and the girls like her who benefit from the work of Girls on the Run.

“Being able to do this for girls, so that these girls get to have this experience that I was able to have, has been so impactful for me and my own running career and my life,” she said. “It’s for me, but it’s bigger than me.” 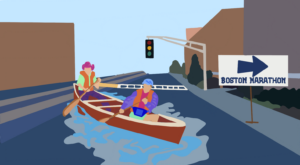