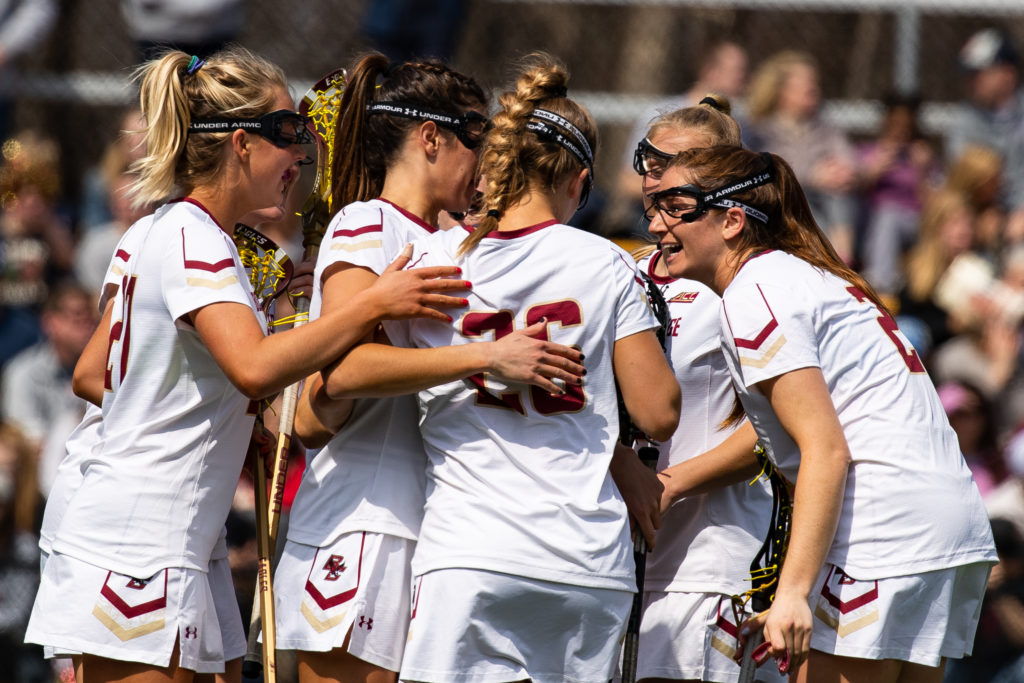 Last Sunday, Boston College lacrosse suffered a devastating ACC Championship defeat to No. 3 North Carolina on its home turf. The outcome stung even more, as it spoiled the Eagles’ perfect season in a very similar fashion to their loss to the Tar Heels the year prior.

When asked about the positives that she could take away from this season’s conference tournament title game, head coach Acacia Walker Weinstein simply said, “The season’s not over. That’s it.”

Indeed, BC is not done yet. In fact, the Eagles are primed for another postseason run. Recognizing the sheer breadth of BC’s accomplishments, the NCAA selection committee awarded the team the No. 2 overall seed in the NCAA Tournament, the highest NCAA Tournament seed in program history.

This year’s iteration of the Eagles have followed an almost identical path as last year’s team. For the most part, both teams steamrolled their competition in the regular season. Following their perfect 19-0 starts, both teams were dealt their first loss at the hands of UNC in the ACC Championship. But this time around, BC notched the No. 2 seed, whereas last season the Eagles were awarded the No. 4 seed.

Ultimately, this is important for a number of reasons. For one, BC will not face No. 1 seed Maryland on its side of the bracket. During the 2018 NCAA Tournament, the Eagles were pitted against the Terrapins in the Final Four, a matchup that they won in overtime, 15-13. Not only did BC have to face Maryland en route to the national title game, it also squared off against Stony Brook in the Elite Eight. The Seawolves, slotted as the No. 5 seed, were considered by many to be a title contender as they occupied the top slot in the Inside Lacrosse Poll for most of the season.

Their matchup turned into a thrilling game that had the makings of a title game. BC narrowly won in overtime, 12-11, thanks to a Dempsey Arsenault goal. In the end, BC fell in the National Championship for the second straight year in a row, as it was narrowly edged out by James Madison, 16-15.

The road in 2019 does not appear to be quite as difficult. In their first game, the Eagles will face the winner of the Dartmouth-Colorado matchup next Sunday in Newton. BC previously beat Dartmouth this year, 20-10, on the back of an eight-goal effort from Sam Apuzzo. Meanwhile, the Eagles last played Colorado in March of 2015, a matchup that they handily won, 17-9.

The next-best challenger is the No. 7 seed, Princeton, a squad that recently claimed the Ivy League crown. The Tigers only have three losses to their name this year, though BC did beat them, 16-10, in the 2018 NCAA Tournament. A rematch with UNC likely looms in the Final Four, as the Tar Heels received the No. 3 seed. While UNC topped BC just last week, it must be noted that the Eagles did down the Tar Heels, 14-8, in Chapel Hill back in March. The matchup in Baltimore is truly up in the air.

Should BC advance to the National Championship, it could face a number of different foes, whether it be No. 5 Syracuse, No. 4 Northwestern, or No. 1 Maryland. BC has already beaten the Orange and the Wildcats this year, and the Terrapins now look vulnerable, especially after their five-goal loss to Northwestern in the Big Ten Championship.

Led by the trio of Apuzzo, Arsenault, and Kenzie Kent, who all went 1-2-3 in the WPLL draft, the Eagles’ total of 341 goals is best in the nation. With senior defender Elizabeth Miller and the tandem of Abbey Ngai and Lauren Daly in goal, BC has demonstrated the ability to put the clamps down on defense, holding nine different opponents to under 10 goals.

Compared to 2017 and 2018 when they were not seeded and seeded No. 4, the Eagles are now presented with their best path to the National Championship. BC’s first two matches are against opponents that it can certainly handle on its home turf. The real challenge comes in the Final Four as UNC will likely await for a crucial rematch with a trip to the title game at stake. While the Eagles have defeated the Tar Heels twice in as many regular seasons, they have been unable to close the deal in the postseason. That test, coupled with another fierce foe in the National Championship, will tell whether or not BC has finally made the leap to bring home the coveted title.