The daughter of a BC graduate and granddaughter of a former BC professor, Raisman expressed her excitement about the event because of her personal ties to the University.

Her gymnastics career began at the young age of 2 with “mommy and me” classes. Though she was involved in other sports early on, a busy schedule forced her to choose one. In retrospect, Raisman believes she made the right choice.

“Around 8 years old, when I made the decision to pursue gymnastics, I also began to realize what the Olympics was, and though I didn’t understand how hard it would be to get there until later, I knew I wanted to be there someday,” she said.

Raisman made another life-changing decision in 2011, when she decided to become a professional gymnast rather than accept a scholarship to the University of Florida. The decision was hardly a no-brainer, she recalled, because she was intrigued by the gymnastics program and overall environment at Florida, but ultimately couldn’t ignore her dream of going professional. Despite the risk of failure and the low odds of making an Olympic roster, Raisman pursued her dream.

“When I look back now, I don’t really think I understood how much of a risk it was, but it just kind of felt right to me at the time,” she said.

Raisman competed at the 2012 Summer Olympic Games in London and at the 2016 games in Rio De Janeiro, both of which she looks back on as the hardest years of training of her life. With the pressure of representing an entire nation resting on her shoulders, as well as those of her four teammates, Raisman admitted that the experience was both unreal and “nerve-wracking”.

For Raisman, a main highlight of the Olympics and a reason for Team U.S.A.’s success was the supportive dynamic between her and her teammates.

“Some of my favorite memories are actually not in the arena competing, [they’re] actually just laughing and being silly in our rooms and having a good time,” she said.

The Olympian attributed her success to the work ethic she inherited from her parents and the constant motivation she received from her coaches. She admits that she was not the most talented athlete when she was younger but that it was her hard work and dedication to the sport that allowed her to reach her goals. Her desire to never have regrets about her training drove her to the gym for hours on end every day.

Her mindset was largely shaped by advice she received from her coaches, who frequently said, “You’re never going to regret working too hard, but you are going to regret if you don’t work hard enough,” according to Raisman.

In addition to being known as an Olympian, Raisman is now widely known for her advocacy for survivors of sexual abuse. Since giving testimony at the trial for Larry Nassar, the former U.S.A. Gymnastics team doctor and osteopathic physician at Michigan State who was sentenced to up to 175 years in prison for sexual abuse in January 2018, Raisman has started to travel and speak about her experience, inspiring hope and providing support for other victims. She says she gained the strength to do so because of the time she takes for herself, which is a practice she strongly recommended other people adopt.

“If I want to help other people, I also have to take care of myself,” she said.

Speaking about such trauma is both emotionally and physically exhausting for her, and she sometimes feels as physically drained and achy as when she trained for the Olympics, she said.

Raisman said she often hears criticism regarding the timeliness of reporting an incident of sexual assault. These claims have no validity, she said, because trauma affects everybody differently, and some people may not even realize until time has passed that what they experienced was, in fact, abuse. She also explained that many people have been speaking up for years but society wasn’t ready to listen, so reports were swept under the rug.

Raisman proposed a full independent investigation to trace all those still involved with U.S.A. Gymnastics who assisted or covered up Nassar’s abuse in any way.

She stressed that adults should not be allowed anywhere near children until they have been educated on preventing child abuse because it is far more common than many people realize. Raisman has worked closely with Darkness to Light, an organization which works to end child sexual abuse.

The recovery process for Raisman has concentrated on self-care, she said. She also has found therapy extremely beneficial for her both at home and while traveling. Raisman emphasized the importance of having someone to trust, either a family member or another support system. Since trauma does affect individuals differently, Raisman recommended to the audience that they try new things to figure out what works best for them.

Raisman slammed any and all victim blaming. She said it is “devastating” to her that much of society still has this belief that if women are intoxicated, out by themselves at a certain time of night, or dressed in a certain way that they are asking to be assaulted. She staunchly declared that sexual abuse is never the fault of survivors, and that it is imperative that society shift the blame to abusers.

Of all her accomplishments, she said she is most proud of working to be the best version of herself and of her realization that sometimes things get worse before they get better. She is also proud of standing up for sexual assault survivors, even though it has been difficult—she has faced ostracization from the community that used to be her home. Many members of U.S.A. Gymnastics whom she has known since her first competition at age 8 won’t talk to her now because they are disgusted that she has spoken out against the organization.

“It’s been very hard for me because I feel like U.S.A. Gymnastics was my family,” she said. [I just know] in my heart that I am trying to do the right thing.”

Although she isn’t entirely sure how, Raisman exhibited confidence she will continue to be involved in athletics in the future. However, she does not want to pursue a career in coaching. Because she feels her youth was spent almost entirely inside the gym, she now jokes that she is “experiencing life for the first time,” and wants to be able to continue to do so.

“What’s next for me is just being in tune with what makes me happy—just hanging out with my friends and enjoying my life, while also hopefully having an impact on the world that we live in,” she said. 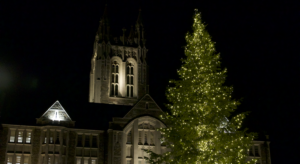