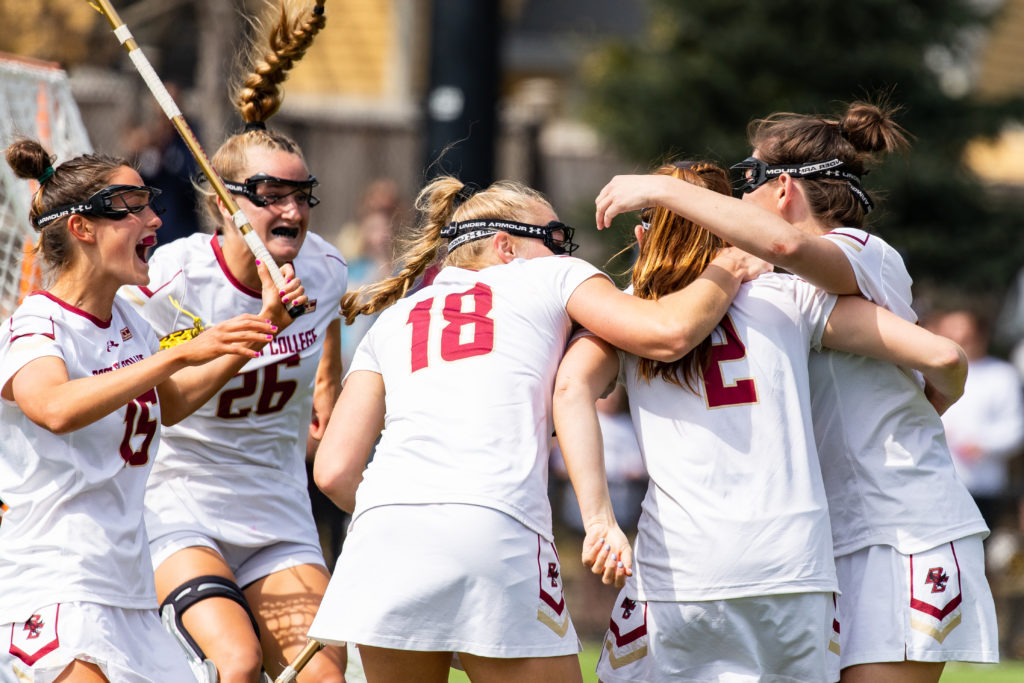 Entering their senior seasons, Boston College lacrosse players Sam Apuzzo and Dempsey Arsenault were expected to build off their phenomenal junior campaigns, and they have done just that.

As a recognition of their outstanding play, the Tewaaraton selection committee announced that Apuzzo and Arsenault were selected as two of the five female finalists for the prestigious Tewaaraton Award, bestowed upon the top player in college lacrosse. This marks the first time in program history that two Eagles have been named Tewaaraton Award finalists.

Apuzzo looks to repeat as the trophy winner after she took home the Tewaaraton Award following her junior season in 2018. Coming into the NCAA Tournament, the West Babylon, N.Y. native has accounted for 78 of the team’s 341 goals, nearly 23 percent of the team’s total scoring production. Her 26 assists give her a total tally of 104 points. Last season, Apuzzo finished the year with 88 goals and 129 points, both of which ranked third in the NCAA.

Like Apuzzo, Arsenault has been incredible. The ACC Midfielder of the Year has put up 57 goals and 23 assists for a total of 80 points while also picking up a team-leading 36 ground balls and causing 14 turnovers. Before last season, Arsenault switched positions, going from a defender to a midfielder. The transition was seamless as Arsenault’s 15 goals from her sophomore year ballooned to 64 in her junior year. Arsenault’s continued success and her prominent presence all over the field have resulted in her being named a top-five finalist for the first time in her career.

Joining Apuzzo and Arsenault as finalists are two Maryland Terrapins in Jen Giles and Megan Taylor, along with Northwestern senior Selena Lasota. Giles, a midfielder, leads her team in goals and points with 50 and 72, respectively, and has been instrumental in leading the Terrapins to the No. 1 overall seed in the NCAA Tournament. Lasota has thrived as an attacker, piling up 74 goals and 89 points, both of which lead the Wildcats. Taylor is the lone goaltender among the five finalists. In her senior year, Taylor has proved to be a rock in net, accumulating 174 saves for a save percentage of 56, which is tied for first in the nation.

Working in Apuzzo and Arsenault’s favor—and what could ultimately sway the decision—is their ability to impact the game in the circle. A year after recording 163 draw controls, Apuzzo has won 150 this season. Her average of 7.5 draw controls per game is eighth best in the nation. Arsenault has been effective in that department as well, tallying 84 draw controls. Meanwhile, Giles and Lasota are not active in the circle, having won only 24 and three draw controls, respectively.

The winner of the Tewaaraton Award will be announced on May 30 at a reception in the Smithsonian Institution’s National Museum of the American Indian, located in Washington D.C.

No matter who hoists the trophy, BC has joined Maryland, Virginia, Syracuse, and Northwestern as the only other programs to have multiple top-five finalists for the Tewaaraton Award in one year. It is yet another sign of how head coach Acacia Walker-Weinstein has transformed the program into a juggernaut that belongs in the upper echelon of the women’s lacrosse world.