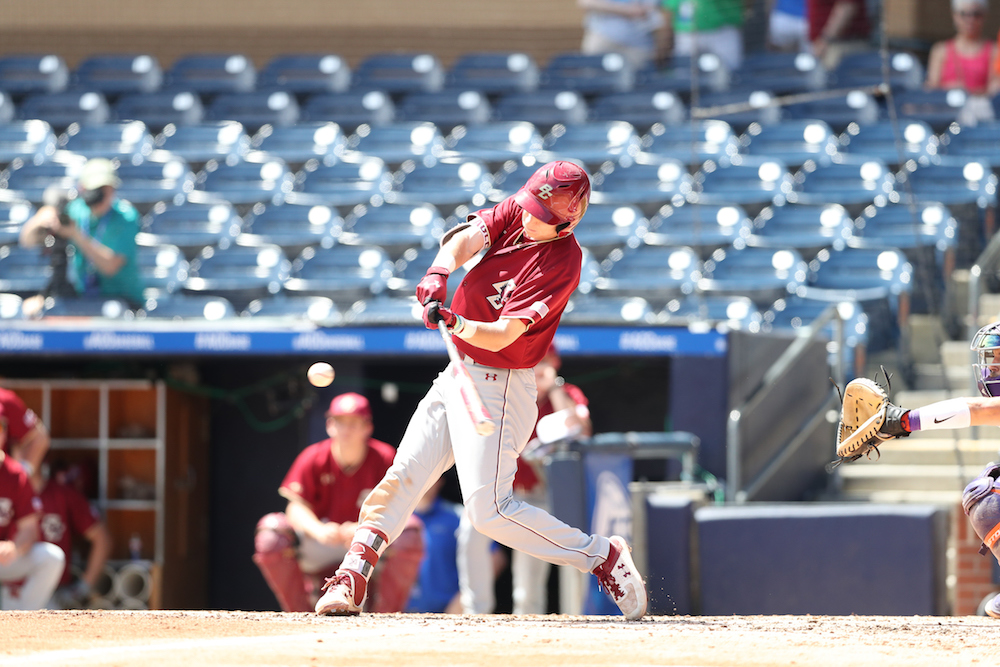 After a thrilling extra innings win over eighth-seeded Clemson, Boston College baseball looks to punch its ticket to the semifinals of the ACC Baseball Championship on Wednesday morning against top-seeded Louisville. The Cardinals, ranked No. 9 in the country in the polls and seventh in RPI, led the conference in both batting average and ERA during the regular season and are a formidable foe for head coach Mike Gambino’s side. Still, if Monday’s win over a Tigers team fighting for a spot in the NCAA Tournament or the fact that the Eagles have taken eight of their last 10 is any indication, one can’t count out BC on the conference’s biggest stage.

The Eagles started All-ACC Freshman Team selection Mason Pelio against Clemson, which lined up All-ACC First Team southpaw Dan Metzdorf to make one of the biggest starts of his career. He’ll square off against Louisville’s Nick Bennett, a junior lefthander who took a step back in 2019 after an All-ACC campaign as a sophomore.

Both starters pitched in the three-game series earlier this season between the two teams, when the Cardinals took two of three at home. Metzdorf needed 80 pitches to go 4 2/3 innings, allowing one earned run on two hits and four walks while striking out five in a 4-0 shutout loss. Bennett, meanwhile, pitched the next day and earned the win, hurling five scoreless frames and giving up just four hits while striking out three in an 11-4 win.

The two largely went in different directions after that weekend, as Bennett saw his ERA climb from 2.70 at the end of March to 4.86, allowing 22 earned runs in his final four starts. Metzdorf, however, began a quality starts streak two weeks later that has yet to end. In his last seven outings, BC has won five times, and he has posted a 2.58 ERA with 44 strikeouts in 42 innings. Metzdorf’s last appearance had similar stakes, as he pitched into the eighth to help the Eagles clinch a spot in the ACC Championship field with a win over Notre Dame.

The pair of lefthanders will have their hands full against two very dangerous lineups. The top-seeded Cardinals slugged their way to a .298/.448/.397 slash line in the regular season and led the conference in runs scored and stolen bases en route to becoming the only team to reach 20 conference wins. The lineup is anchored by first baseman Logan Wyatt, a patient hitter who has racked up 63 walks—good for third in the country—and is hitting .309. He’s joined by third baseman Alex Binelas, a freshman who’s slugged 13 home runs and is hitting .327. The corner infielders both earned All-ACC Second Team honors this season.

Then there’s Tyler Fitzgerald, one of 14 semifinalists for the national shortstop of the year award after leading his team with a .338 batting average, 73 hits, and 60 RBIs. Lucas Dunn, Trey Leonard, and Jake Snider have all stolen upwards of 10 bases this year and will aim to wreak havoc on the basepaths. But BC might struggle to do the same, as Henry Davis has thrown out 54 percent of runners attempting to steal on him.

That said, Bennett won’t have it easy either. The Eagles were 10 percentage points behind Louisville in batting average at .288 and stole just six fewer bases during the regular season. BC has also been peaking at the right time, having scored at least five runs in seven straight games. The Eagles looked plenty comfortable at Durham Bulls Athletic Park on Tuesday, slugging a season-high four home runs. Two of those came off the bat of second baseman Cody Morissette, who finished 3-for-6 and has had three multi-hit games in his last seven games—raising his average to .326 in the process.

Other hot bats for BC include Gian Martellini (13-for-30 over his last seven games), Joe Suozzi (hits in five of his last six games), and Dante Baldelli (six-game hitting streak). Third baseman Jake Alu is on a three-game hitless streak, but there’s good reason to bet on him snapping out of that on Wednesday—the senior failed to register a hit in back-to-back games just once this season.

With Metzdorf on the mound and the fact that Louisville opted not to start staff ace and ACC Pitcher of the Year Reid Detmers, the Eagles surely feel somewhat confident they can keep the ball rolling. It’s a tall task, as the Cardinals took the first two games of the series earlier this season by 15-4 margin, but BC managed to salvage a win in the finale. The Eagles have been swept just once this season by a conference opponent, and their ability to hang in there has undoubtedly fueled this late surge.

“[The] thing about playing in the ACC and being in the ACC Tournament—for 30 games it’s the playoffs. I mean, this league is so good top to bottom,” Gambino said about the level of play. “And that’s kind of how we look at those first 30 regular season games. So the tournament’s awesome. But once they throw the first pitch, it’s just another ACC baseball game.”

Clemson Ties it Late, but Eagles Win in Extras in ACC Tourney Opener
BC Upsets Top-Seeded No. 9 Louisville, Advances to ACC Tournament Semifinals