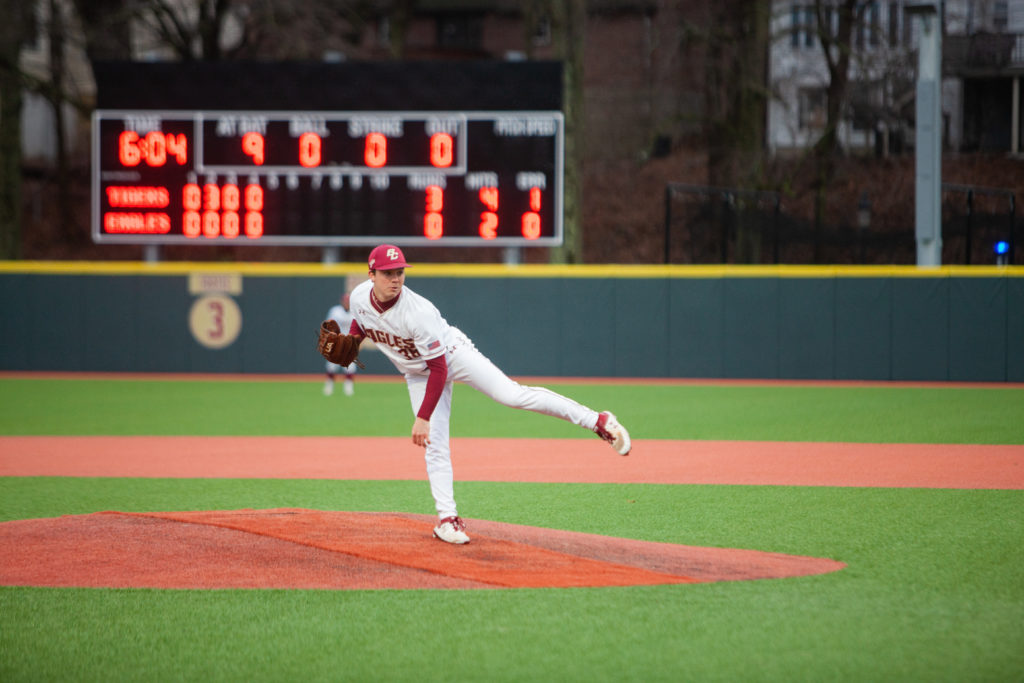 BC Upsets Top-Seeded No. 9 Louisville, Advances to ACC Tournament Semifinals

Dan Metzdorf could have moved back to the windup, but he wasn’t messing around. With a four-run lead, two outs, and runners on the corners, the All-ACC First Team pitcher cocked back and delivered his trademark slider low and away. Louisville third baseman Alex Binelas bit.

The freshman whiffed, as he shuffled out of the batter’s box. Immediately, Metzdorf—in what he called a “culmination of all different emotions,” per ASAPSports.com—turned to his infield, raised his fist, and punched it into his glove in intense jubilation. Then, the senior jumped back around, tipped his cap up above his forehead and walked toward the plate. He high-fived and hugged catcher Peter Burns before being swarmed by his teammates.

Metzdorf had just thrown his first complete game of his career in the biggest game of his life—one that only spanned two hours and 44 minutes. The senior made quick work of the Cardinals’ lineup, striking out seven batters and allowing just three hits to a team that entered the day with the most runs scored in the conference. Hours removed from BC’s ACC Tournament opening win over Clemson, Metzdorf’s gem set the stage for a monumental upset. The Eagles walked out of Durham Bulls Athletic Park with a 5-1 victory over No. 9 and top-seeded Louisville, having won Pool A, booked their ticket to the conference championship semifinals, and won two ACC Tournament games in the same year for the first time since 2009.

When Metzdorf took the mound against the Cardinals back in early March, he needed 80 pitches just to get through 4 2/3 innings. Although he only allowed one earned run, he walked four batters. On Wednesday, however, the Burlington, Mass., native was nothing short of efficient. He clocked out with 120 pitches and only walked one batter through the first six innings of play. Extending his quality starts streak to eight, Metzdorf put on a show in Durham, N.C.

For a bit, it looked like a premier pitcher’s duel. Louisville (43-14, 21-9 Atlantic Coast) starter Nick Bennett—an All-ACC Second Team performer a year ago—opened the game by spinning three scoreless frames. There’s no telling how much further he could have held the Eagles (31-26, 12-18) at bay. Cardinals head coach Dan McDonnell pulled Bennett after the third inning in favor of righthander Bryan Hoeing.

That’s when the game started to pick up pace. In the bottom of the fourth frame, Joe Suozzi smacked a double to right center, and the extra-base hit seemed to rattle Hoeing. After getting Chris Galland to line out, he hurled a wild pitch, which allowed Suozzi to move to third. Moments later, Hoeing walked both Burns and Dante Baldelli, loading the bases with two outs. Making the most of the opportunity, Jake Alu snapped a three-game hitless streak with a single up the middle to score Suozzi and Burns, giving the Eagles a 2-0 lead.

Hoeing rebounded by inducing a Cody Morissette flyout and only conceding one more hit over the course of his final two innings of work. Yet, with the way that Metzdorf was dealing, those two fourth-running runs were extremely costly. It wasn’t until the seventh frame that the senior really ran into trouble.

After issuing just his second walk of the day, Metzdorf tried to pick off Tyler Fitzgerald at first base. Unfortunately for the lefty, his throw missed the mark, and rolled past Jack Cunningham all the way toward the seats along the first base line. To make matters worse, Cody Morissette picked up the ball only to fumble his release and watch it bounced out of play, awarding Fitzgerald another base—after he already scampered to second on the errant pickoff attempt.

All it took was a Logan Wyatt grounder to drive in Fitzgerald from third, at which point Louisville cut its deficit to one. Luckily for BC, Metzdorf recovered in no time, using just six pitches to record the final two outs of the inning. In a matter of a minutes, the Eagles would make up for the lost run—and then some.

BC’s eighth-inning surge almost didn’t happen. With two outs, Brian Dempsey hit a ground ball toward the right side. Cardinals second baseman Justin Lavey, who had only committed one error all year, charged forward, but failed to glove the ball off the hop. Dempsey made it to first safely and then advanced to second following a Cunningham walk. Facing an 0-2 count, Gian Martellini drilled an opposite field single to right, scoring Dempsey. Keeping the two-out rally alive, Suozzi took Louisville reliever Michael Kirian right up the middle, bringing home Cunningham to extend BC’s lead to 4-1.

Insurance runs and all, BC found itself on the brink of victory. And it got that much closer with an eight-pitch eighth inning, all thanks to Metzdorf. The senior fanned Zach Britton in three pitches and, two batters later, tracked down an inning-ending pop-up in the sun. Just for good measure, the Eagles tacked on one more run in the bottom of the eighth. Alu tattooed a Michael McAvene pitch off the right field wall to plate Burns.

With a 5-1 advantage in hand, Metzdorf trotted out to the hill for one last stanza. Entering the ninth, he was 102 pitches deep and set to square off against the top of the Cardinals’ order.

“I have all the confidence in the world in the guys around me, and it’s basically made it easier to pitch,” Metzdorf said. “Unbelievable—so much fun.”

Without his teammates, particularly Alu, the ninth inning could have been sticky. After Lucas Dunn drew a walk and Jake Snider logged an infield single, Fitzgerald hit a grounder to third base. Alu fielded the ball and, without hesitation, tagged Dunn before throwing out Fitzgerald at first. The play was reviewed, and ultimately Alu’s critical double play was upheld. One walk later, Metzdorf settled in for the final out of the game, fittingly a strikeout.

With 31 victories this season, BC now has its second-highest win total of the decade—the first coming in the Eagles’ 2016 NCAA Super Regional run. And because Metzdorf went the distance, BC’s bullpen got a day off after a hectic extra-innings affair against Clemson. The way things are going, the Eagles, who boasted the 58th-best RPI in the country before Wednesday’s game, could be in for another magical ride.

“I think there’s going to be some serious consideration regardless of what happens on Saturday,” Gambino said. “I think we’re going to play a couple more days, but I think we’ve got to be seriously talked about as an at large.”