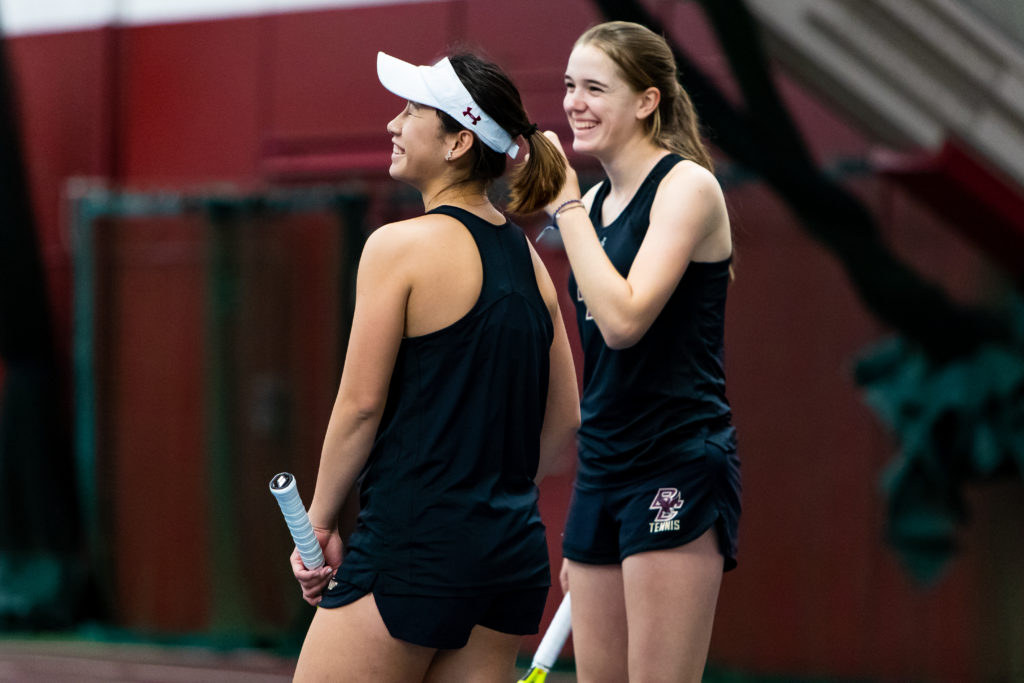 It finally came together for Boston College women’s tennis in 2019. After coming up short in many seasons amid brutal ACC competition, the Eagles—buoyed by great coaching and outstanding play—got over the hump and booked their first trip to the NCAA Tournament since 1997. While BC ultimately fell in the first round to No. 24 Florida, its accomplishments from the rest of the season cannot be diminished. The Eagles saw many of their players step up on the court, and that translated to 16 wins on the year.

Best Moment: BC Earns Its Spot in the NCAA Tournament for the First Time in 22 Years

Without a doubt, the highlight and goal that BC was working toward for the entire season—as well as in years past—was clinching a berth in the NCAA Tournament. The Eagles made the big dance for the first time since 1997. BC was close to reaching this pinnacle on a number of occasions, but it never broke through until 2019. After the Eagles recorded 15 wins in the regular season—the program’s highest total in 15 years—and topped Louisville in the first round of the ACC Championship, the selection committee determined that they warranted a spot in the tournament. It was truly a monumental moment for the team to achieve and one that sets the stage for success in the future.

In a season of mostly highs, there was a low point that occurred midway through the year. After rattling off wins in the first nine games of the season, the Eagles finally hit a lull in mid-February, starting with a loss on the road to Virginia on Feb. 16. From there, the Eagles dropped four more contests to make it a five-game skid. Even during this losing streak, BC played well and reached several milestones in the process. The Eagles gave strong efforts against UVA, North Carolina, and North Carolina State—all programs ranked inside the Top 25—as they fell, 5-2, each time. While facing UNC, Yufei Long and Kylie Wilcox each set the record for beating the highest-ranked opponent in program history as they defeated No. 2 Makenna Jones and No. 6 Sara Daavettila, respectively, in three sets.

Though many different players played a pivotal role in catapulting the Eagles to the NCAA Tournament, captain Jackie Urbinati deserves the most credit. The lone senior on the team, Urbinati not only provided invaluable leadership to the underclassmen, but she also performed very well on the court. Her singles record (13-11) was a hair above average, but she shined on the doubles court, as her and Wilcox teamed up to form a lethal pairing. Over the course of the year, the duo went 14-7, but they caught fire as the season drew to a close. During their last seven matches, they won every single contest—three of which were victories against teams slotted in the Top 50.

Urbinati also rose to the challenge during the NCAA Tournament when BC faced No. 24 Florida in Lawrence, Kan. While the Eagles ultimately lost the match, 4-1, Urbinati was the lone BC player to pick up a point, as she defeated Victoria Emma in dominant fashion, 6-2, 6-2. Plus, Urbinati and Wilcox—ranked No. 51 as a doubles pair—held a 5-3 lead over No. 25 McCartney Kessler and Emma before their match went unfinished. In short, Urbinati wrapped up the season and her collegiate career on a high note and firmly established herself as not only the core piece of the team, but also the leader that the younger players admired.

While the entire roster took a step forward in the Eagles’ breakthrough season, Natasha Irani stood out in particular. Last year, Irani was a freshman who started most of the season at No. 3 singles. While she certainly had her moments, she finished the season with a 3-10 record in singles play against ACC teams. In 2019, she bettered that mark by a significant amount. In addition to finishing with a 23-12 record in singles, she stepped up against some of the best opponents in the nation by notching a 9-5 record in conference play. Irani, like her fellow teammates, heated up as the season drew to a close by winning six of her last seven singles matches. During the ACC Tournament, she defeated her singles opposition from Louisville and Wake Forest. And during the regular season, she recorded straight-set victories against Pittsburgh, Miami, Georgia Tech, and Virginia—the latter three of which were ranked in the Top 30.

Rookie of the Year: Laura Lopez

Laura Lopez made an immediate impact as a freshman, as the Spanish native stepped into the starting lineup from the get-go and excelled. Lopez won eight of her nine matches in singles to kick off the year. While she may have slowed down during the middle portion of the season, she came through in high-pressure situations.

Time and time again, Lopez demonstrated her ability to pull through for the Eagles when they needed it most, and this will only continue during her next three years on the Heights. Her first major victory came early in the season against then-No. 10 Syracuse. At No. 5 singles, she provided the clinching victory to give BC its highest ranked win in program history. Two months later, she once again shined in the biggest of moments, this time defeating Ana Madcur in straight sets to knot up a victory over Miami. Given all that Lopez accomplished in just her first season, it will be exciting to see what she can do in her next three years on the team.

The Eagles’ efforts were rewarded when they earned a trip to Lawrence, Kan. to face the Gators in the first round of the NCAA Tournament. After a season of hard work, BC achieved its longstanding goal of making the big dance. BC earned its first NCAA Tournament appearance for the first time in 22 years. The matchup against Florida was quite imposing, and the Gators mostly had their way with the Eagles as they advanced with a 4-1 victory.

The outcome of that matchup is not what matters, though, it’s the fact that BC even made it to the tournament in the first place. The Eagles, along with Fairfield, were the only teams from the Northeast region to earn a spot in the tournament. Traditional powerhouse programs are spread out across the country, but very few women’s tennis teams emerge as contenders in the Northeast. BC cemented its name as one of those contenders with its incredible 2019 season.

Prior to its matchup against the Orange, the Eagles had largely rolled past their non-conference opposition with little resistance, en route to an 6-0 record. Syracuse presented BC with its first real test of the season, and the Eagles were up to the task. BC set the tone early, as Dasha Possokhova, Elene Tsokilauri, Wilcox, and Irani won their doubles matches to go up, 1-0. A competitive round of singles play then ensued. Possokhova, Irani, and Wilcox fell to their opponents—the latter two doing so in three sets. Playing at No. 1 singles, Iowa transfer Yufei Long pulled a straight-set upset over No. 43 Gabriela Knutson. Urbinati followed suit with a three-set comeback against Miranda Ramirez.

With the match tied at 3-3, it all came down to Lopez and Dina Hegab on the fifth court. The freshman edged out Hegab in a first-set tiebreaker and proceeded to put the finishing touches with a 6-3 victory in the following set. This victory was enormous for BC as it marked the program’s first-ever victory over a top-10 opponent. It ultimately set the stage for what would it end up being record-breaking season.

Later in the season, the Eagles approached a pivotal juncture. With only four games left in the regular season, BC needed to defeat a tough Miami team at home if it wanted to preserve its hopes of making the NCAA Tournament. On April 5, the Eagles came ready to play. BC grabbed the early doubles point, thanks to victories at No. 1 doubles team of Urbinati and Wilcox and the No. 3 doubles team of Long and Irani. In singles, Urbinati, Long, and Tsokilauri all fell while Irani and Wilcox topped their opponents, making it 3-3.

Again, the weight fell on Lopez’s shoulders. Positioned at No. 6 singles, the first-year player was pitted against Ana Madcur. Lopez dominated in the first set, taking it, 6-1. With all eyes on the sixth court now, Madcur put up a stronger fight, but Lopez edged her out in the second set, 7-5, securing a massive upset victory for the Eagles—one that significantly boosted their resume in the eyes of the selection committee.

Urbinati and Wilcox earned a number of victories playing together, but the rest of the Eagles’ doubles teams struggled to find consistency behind them. This was not a problem against non-conference foes. Besides their loss to Florida, the Eagles were undefeated against opponents outside of the ACC.

BC could drop the doubles point but still rally in singles to secure a victory. When the Eagles began to face conference opponents, their weakness in doubles was exposed. Often times, ACC titans would jump out to a one-point lead after winning the doubles point, creating a hole that BC could not climb out of. For much of the year, Bentley experimented with different pairings, but he never found a steady lineup that proved to be a good bet to take home the early point in the match. The Eagles will likely be able to sort out these doubles teams in the offseason and hopefully even the ground against some of their more intimidating conference foes.

Urbinati’s presence will obviously be missed, but, other than her departure, the Eagles will return the rest of their core. BC will also welcome a reinforcement in the fall as Hailey Wilcox, Kylie’s younger sister, joins the team. Like her older sister, Hailey is a five-star recruit originally from Hutchinson Island, Fla. She’ll likely make an impact for the team right from the get-go and fill the void that Urbinati leaves. The Eagles finally achieved their long sought-after goal in 2019, as they finally clinched a spot in the NCAA Tournament while grabbing 16 wins in the process. It is now on Bentley and Co. to make this standard of success the typical expectation. With a highly talented grouping returning, it would not be a surprise is the Eagles made another postseason run. 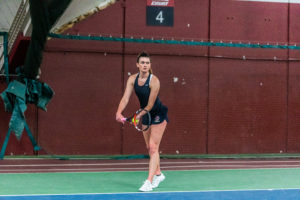