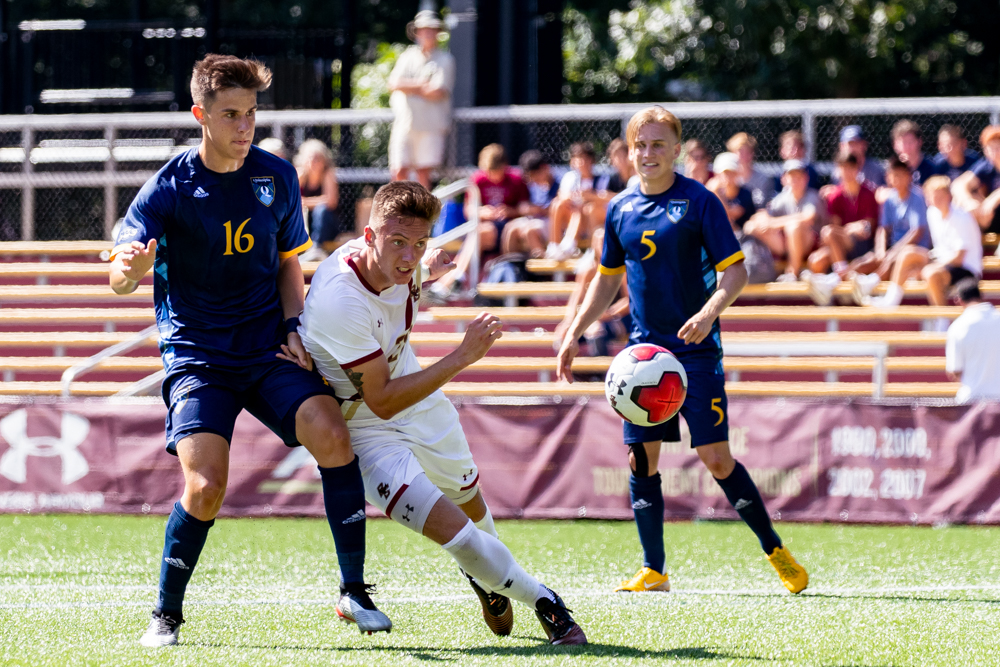 Boston College men’s soccer lost several big names—Simon Enstrom, Trevor Davock, and Joshua Forbes—this past offseason, but on Thursday afternoon against Quinnipiac the youth movement for head coach Ed Kelly was on full display in its season opener. Behind four starting freshman and a new forward up top, the Eagles struck for a goal in each half and knocked off the Wildcats, 2-0, in a physical matchup on a sweltering afternoon in Newton.

BC (1-0) senior forward Adam French—who didn’t see the field in 2018—made the most of his starting and captain role, scoring his first career goal in the ninth minute. Freshman Amos Shapiro-Thompson tacked on an insurance goal set up by a pair of his classmates in the 76th minute, and first-year goalkeeper Giacomo Piccardo had three saves in the shutout.

“It was very hot,” head coach Ed Kelly said after. “We were a little anxious, there was a lot of young guys on the field but overall pretty good. It’s easy sitting on the sideline and telling people to cover and press, but it was pretty hot.”

Quinnipiac (0-1) was on its heels out of the gate, with the Eagles working on sending long balls ahead for their forwards. French’s first touch of the game was an ugly one—he tried to turn and shoot after settling the ball and missed badly—but his second couldn’t of been more perfect. Junior Lasse Lehmann sent a long ball ahead, and French deftly touched the ball past Wildcats’ keeper Jared Mazzola for the early 1-0 lead.

The Wildcats started to settle down some, but the balance of chances was still in BC’s favor. Preseason All-ACC selection Kristofer Konradsson had a trio of shots that soared high, while Heidar Aegisson played a few good balls into the box from distance. Eventually, in the final minute of the half, freshman substitute Mike Suski set up teammate Ronaldinho Diaz with an opportunity in the box, but he lost it and couldn’t get a shot off.

Quinnipiac came out of the break with more aggression, and Romain Daniellou and Brage Aasen both got shots off in the first 10 minutes. Aasen’s was deflected for Piccardo to fall on, while Daniellou saw his skip wide. The Eagles’ back line was losing its shape a bit, but settled down and started to create chances on the other side.

In the 67th minute, BC’s Joe Kellett sent a great ball to the far post, where freshman Stefan Sigurdarson dove and got his head on it but it was deflected away. A few minutes later, Kondradsson found Sigurdarson slicing in, but his low, hard shot was saved again. Sigurdarson’s strong play didn’t go unrewarded, though. Suski found him ahead, and he beat a Quinnipiac defender along the end line and delivered a pass to Shapiro-Thompson, who tucked away the game’s second goal.

The impressive performance from the freshman wasn’t limited to the offense, either. Centre back Victor Souza was one of five players on the team to play the full 90 minutes, and he was a calm and steadying force on the back line alongside David Longo.

“I thought Stefan [Sigurdarson] did really well and Amos [Shapiro-Thompson] is a great player,” Kelly said. “The kid Victor [Souza] did really well, he’s pretty steady. He’s not a big talker as a centre back, but a really good reader of the game. Longo did well, there’s a good partnership there.”

The Eagles very nearly added more insurance goals in the final 10 minutes. Suski had the ball cutting in on net—and had a teammate he could’ve passed to—yet instead opted to try to beat Mazzola, who slid out to stop him. Then, BC’s Jesus Sahugan led a 3-on-1 break but didn’t play a good pass and then tripped up on a follow-up effort. Still, a two-goal win against a Wildcats’ side that finished with 10 wins a season ago is nothing to frown at.

Things don’t get easier, though, as the Eagles have their biggest non-conference game of the season up next. BC hits the road to take on Boston University on Sunday, who are coming off of a shaky 2018 season but always elevate its play against the Eagles. Last year’s meeting was the stuff of legends, as BC rallied twice before settling for a 3-3 draw.