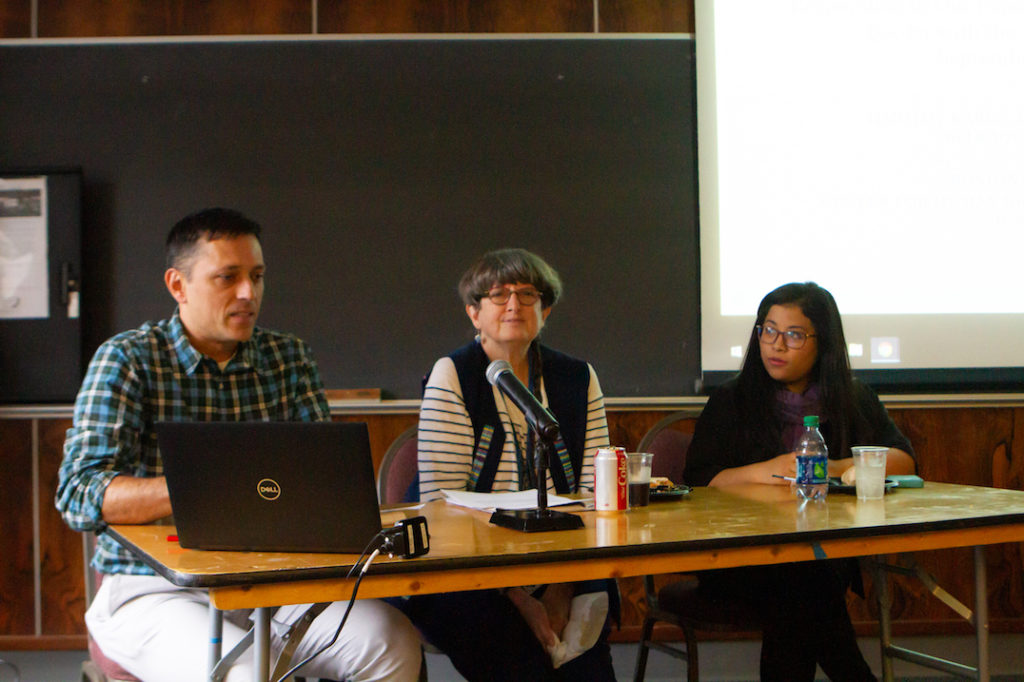 Three Boston College faculty members convened to discuss what they experienced when they visited the United States southern border with the Encuentro Project in May at a panel hosted by the Center for Human Rights and International Justice on Sept. 12. The Encuentro Project is an immigrant-help organization run collaboratively by Jesuits, Marist Brothers, the Sisters of San Francisco of the Holy Family, and lay people.

Timothy Karcz, assistant director of the Center for Human Rights and International Justice, spoke about the three official ports of entry at the border, at which immigrants are encouraged to request asylum.

“You will see a lot of the measures the U.S. government has been coming up with to make seeking asylum there more difficult in some of the actions that desperate migrants have taken,” he said.

Karcz displayed data that showed the number of apprehensions at the border has risen dramatically since 2017. The number of family-unit apprehensions alone—which consists largely of families from Guatemala, Honduras, and El Salvador—has risen 1,243 percent in the past year.

“He wanted to try and catch just about everybody that he could and thought that they should have a lot more staffing to do so at the deserted part of the U.S. southern border,” Karcz said. “However, he did admit there were a few bad apples … There is a permeation into the culture of sexist and racist agents who patrol this area.”

Raquel Muñiz Castro, a professor in the Lynch School of Education and Human Development, spoke about the immigration policy known as “metering,” or making asylum seekers wait before being allowed to cross into the United States. This policy causes overcrowding in processing and detention centers. Consequently, migrants, especially those from Central American countries, are making more dangerous border crossings elsewhere.

M. Brinton Lykes, the co-director of the Center for Human Rights and International Justice, asserted that one of the reasons that the center thought it was important that the trio take this trip was to help the BC community begin to think about literal national borders, as well as the different borders that exist within the U.S.

“What was striking to us about this trip were the incredibly strong, positive relationships of people on both sides of this and the people that cross the border, and the extraordinary commercial interconnections we have between these two countries,” Lykes said. “We want to try and think about these issues in the broader historical and socio-political context in which they unfold.”

The group also encountered Rúben García, a first responder to the migrants coming across the border. García set up one of the first shelters that provides lodging and food to hundreds of thousands of people, particularly families with young children, and has put together a network of volunteers to help distribute resources to migrants.

“One of the main issues that faced us while we were there is, ‘How do we think about the longer term issues that need to be resolved to bring truth and justice into our midst?,” said Lykes.

The panel split the audience members into three groups and allowed them to brainstorm about what they could do about the problems immigrants face at the border.

One group discussed how youth migrants who have entered the country illegally could benefit from more inclusive policies in the education system. Another group talked about the relationships between Immigration and Customs Enforcement and police officers in Massachusetts and discussed how they could provide help to migrants who have illegally entered the country as Massachusetts discusses legalizing processes that would make their lives much more challenging.

The third group looked at the changes the Department of Homeland Security has made to the public charge rule, which will result in people applying for legal immigrant status or renewal of their “green card” being more closely scrutinized based on their use of government benefits.