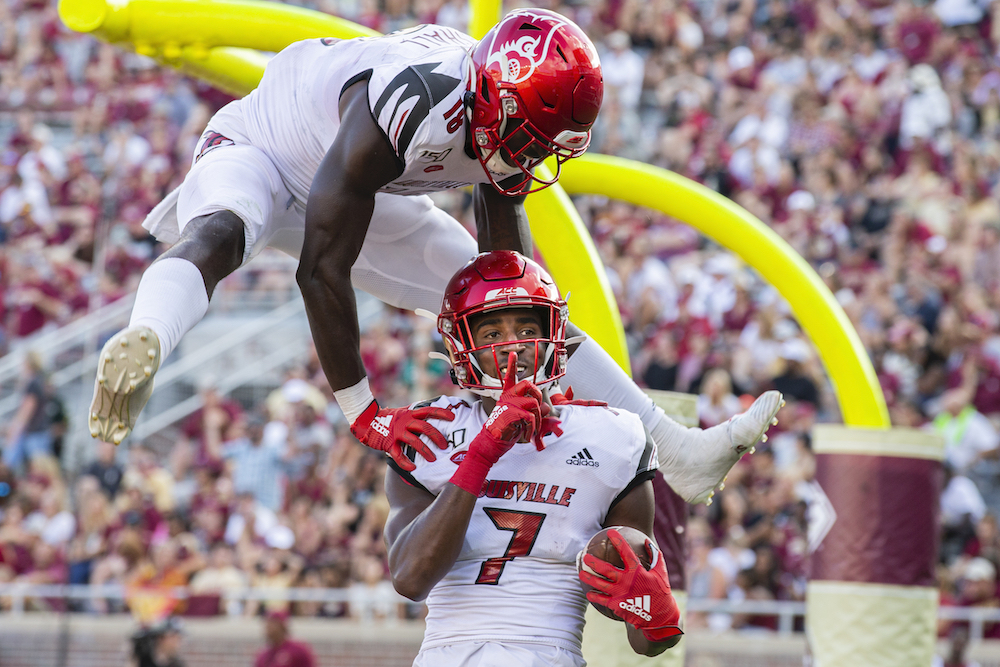 Fresh off a disappointing 27-24 loss to Wake Forest in which Boston College football outgained its visitors in total yards, 533-440, the Eagles head south for their first conference road game of the year. The opponent? Louisville, a team that’s aiming to snap a nine-game ACC losing streak. The Cardinals (2-2, 0-1 Atlantic Coast) fell in their conference opener against Florida State, dropping a 35-24 setback—despite erasing an early 21-0 deficit and taking a fourth-quarter lead. The Eagles (3-2, 1-1), surprisingly, enter this matchup as 6.5-point underdogs, which speaks to Louisville head coach Scott Satterfield’s ability in his first year of a reeling program.

Who is BC playing?
Louisville

Where is BC playing?
Cardinal Stadium, Louisville, Ky.

How to Watch:
The game will be broadcast on the ACC RSN and available on NESN.

Last season, with star running back AJ Dillon out, the Eagles turned to freshman David Bailey. He more than rose to the occasion, leading a second-half surge and finishing with 112 rushing yards and a touchdown as BC won comfortably, 38-20. The game the year before warrants a mention, though, as Dillon crashed onto the national stage with a herculean performance. The then-freshman ran for 272 yards and four touchdowns—including a career-defining stiff arm—en route to a 45-42 win that came down to Colton Lichtenberg’s 27-yard game-winning field goal. It was enough to overcome an impressive effort from Cardinals quarterback Lamar Jackson, who accounted for 512 yards of offense and five touchdowns in the loss. All told, Louisville has a slight 6-5 edge in the all-time series, but the Eagles have taken the last two.

What to Expect from Louisville:

The biggest question mark on the Cardinals’ offense—which enters eighth in the conference in scoring (30.3 points per game)—is at the quarterback position. Both Jawon Pass and Malik Cunningham have wrestled with injuries, but it appears that Cunningham, who started against FSU and left with a leg injury, will get the start.

“I would say [it’s] really kind of like we were going into our last game,” Satterfield said on Monday (per CollegePressBox) about Cunningham, but still left it up in the air. “Whoever is healthy and gives us the best chance to move the offense, that’s who we will play.”

Whether it’s Cunningham or Pass, you can still expect a potentially dangerous Louisville offense. Running back Javian Hawkins is third in the conference in yards per game (97.5) as the go-to option for a Cardinals rushing offense that only trails BC in yards per game (226.3) in the ACC rushing rankings. Hawkins splits time with Hassan Hall, who is less explosive but still 13th in the conference in yards per game. Then, through the air, there’s Tutu Atwell—who has been nothing short of a weapon for Satterfield’s quick-moving offense. Atwell, through four games, only trails Clemson’s Tee Higgins in yards per reception (19.4) and is second in the ACC in touchdowns with five.

Not to mention Dez Fitzpatrick, who Cunningham found for a 74-yard touchdown reception against the Seminoles. That was one of the redshirt-junior’s seven catches for 133 yards, so expect Louisville to try and maximize Fitzpatrick and Atwell’s breakout ability against a weaker Eagles secondary than years past.

Still, even with these weapons, the Cardinals’ passing game has yet to gel. This has been the product of inconsistency under center and struggles to protect the quarterback. Louisville is allowing 3.3 sacks per game, 117th in the country, and ranks 13th in the ACC in passing yards.

Last year, the Cardinals ranked dead last in the ACC in scoring defense (44.1 points per game), rushing defense (277.3), and sacks (11 total). Louisville had a respectable passing defense, ranking fifth, but only came up with six interceptions and had opposing teams run all over them.

This year, Satterfield brought defensive coordinator Bryan Brown with him. Brown engineered a strong defense at Appalachian State, using a 3-4 scheme to finish third in the country in pass defense (148.1 yards per game), and sixth in both total defense (279.3 yards) and scoring (15.7). So far, after shifting players around, Brown’s been able to find results. The Cardinals are middle of the pack in scoring defense but have vaulted to sixth in rushing defense (128.8 yards per game)—more than halving last year’s total—and it’s not the result of poor competition.

Louisville has faced some dynamic running backs in the early going. It held FSU’s Cam Akers—ranked 12th nationally in rushing—to 115 yards on 29 carries. It also bent but largely didn’t break against Notre Dame’s Tony Jones Jr. and Ian Book, then locked down Western Kentucky’s leading rusher Gaej Walker. The run defense will be facing its biggest test, though, as BC brings in Dillon, Bailey, and the nation’s No. 13 rushing offense.

“I think the key this week with Dillon and the other back is that you have to stop that momentum initially,” Satterfield said. “Once they cross the line of scrimmage, they’re able to fall 4, 5, 6 yards. If you can make them stop their feet in the back field, they don’t have the kind of acceleration right off the bat.”

Still, BC also has the threat of passing, which Satterfield didn’t discredit. Eagles quarterback Anthony Brown is coming off a game in which he completed a season-high 72.4 percent of his passes for 265 yards. The Cardinals’ secondary could be vulnerable, too, as they are fresh off a game where they gave up 382 passing yards to Alex Hornibrook and the Seminoles.

Pegging the Cardinals as favorites doesn’t make the most sense, as it seems like the Eagles are facing a “national hangover” from the Kansas loss. BC has bounced back from that by beating Rutgers (albeit sloppily) and then very nearly spoiling the Demon Deacons’ undefeated season. If Brown is accurate once again and the running game is too much for the Cardinals to keep up with, this could be a long day for Satterfield’s defense. However, the same could be said about BC’s defense, as it’ll be trying to keep a lot of playmakers in front of them. With good execution, this could easily be a shootout, but if it ends up being a matchup between two teams on unsteady footing, it could very easily fail to hit the projected 60 combined points mark.