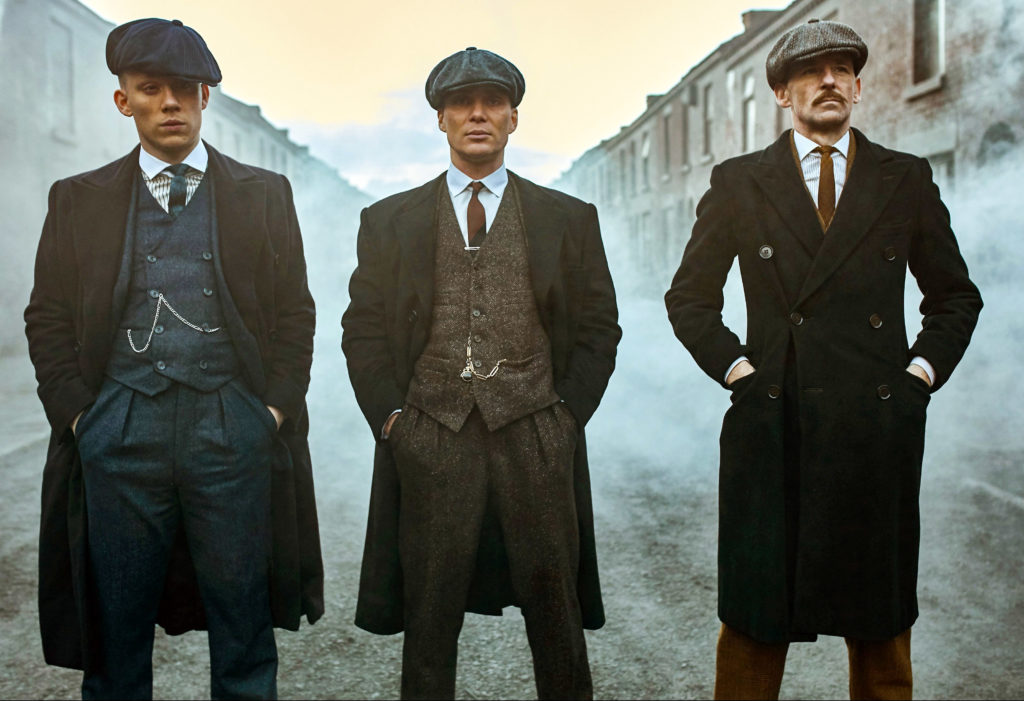 Thomas Shelby (Cillian Murphy) is back, and he’s as gangster as ever. Season Five of Peaky Blinders premiered on Netflix on Oct. 4, picking up four years after Season Four’s finale. And although Thomas and Co. seem to be far past the violence that made their fortune—the Shelby Company is a legitimate business enterprise now—all roads lead back to their Birmingham roots and the Peaky Blinders are in action once more.

The year is 1929 and the Shelby family is spread all over the map. Thomas, riding a horse through the bleak fields outside of Birmingham, returns to a caravan with his second wife, Lizzie Stark (Natasha O’Keefe) and two children. Michael (Finn Cole) wakes up in Detroit. Polly (Helen McCrory) is first seen in a black negligee in Monte Carlo. And Finn (Harry Kirton) is now old enough to fully participate in the violent endeavors of his gangster older brothers. Despite the obvious opulence of the Shelbys’ new lifestyle, the Shelby Company’s fortune is about to plummet.

Following the reintroduction of the Peaky Blinders, the first episode depicts the implications of the 1929 New York Stock Exchange crash—and the Shelby Company had a great deal of money invested. Though Thomas predicted that the crash would happen days before, Michael—now a company accountant—resisted taking Shelby money out of stocks. Now, Thomas is tasked with maintaining financial security for his company and entire family and, in the words of Arthur Shelby, Thomas’ infamously wild older brother played by Paul Anderson, they’re “f—ked.”

With real historical significance, Season Five of Peaky Blinders manages to show fictional effects of a real-life event. The Shelbys have now lost thousands of pounds in company income to a crashed stock market, and viewers see the beginnings of the Great Depression through the lens of a television show. The Shelby Company’s business now lies in the import and export of cars. Following the stock market crash, the legitimate part of Shelby business that Thomas and the rest of the Shelbys strived for is now in danger. Season Five of Peaky Blinders does a fantastic job of merging history with fiction.

And although the women of Peaky Blinders have taken the mainstage in seasons past, they take further control in Season Five. Linda Shelby, Arthur’s domineering wife played by Kate Phillips, pushes Arthur in a way that his brothers don’t. She’s tough and frequently makes snide remarks toward Tommy’s claims that the Shelby Company is a “modern company” that employs women—even though their voices aren’t truly heard. Ada (Sophie Rundle), now pregnant again, stands up to modern times and plans to give birth despite not having a husband. And McCrory embodies the sexuality and strength of Polly Gray more so than ever before. She’s sexy, smart, and takes none of Tommy’s nonsense.

No season of Peaky Blinders would be complete without Grace Burgess (Annabelle Wallis), Tommy’s late wife. She comes to Tommy in moments of weakness, usually when he’s high on the dope that he’s been sedating himself with. And this time, the reappearance of Grace when she is obviously dead is more emblematic of Tommy’s weakness.

Although he’s a notoriously strong and stoic character, Season Five takes Tommy’s development in a new direction. He’s struggling like never before—in the first episode, Tommy shoots and kills a lame horse, and then sticks the gun to his own head. In the second episode, while walking through a field riddled with bombs, Tommy nearly intentionally detonates them. This is a vulnerable and dangerous side to Tommy that fans haven’t seen before, and Peaky Blinders does well to avoid a potential flatness in character development for Tommy.

But one of the most astounding aspects of this season is the threat to family ties. Michael, accused of conspiring with Tommy’s enemies, puts the Shelby family loyalty into question—a potential betrayal that viewers couldn’t have seen coming.

With almost two years since Season Four’s premier, the British hit could have fallen flat with the same old antics and crimes of the Shelby family. But Season Five soars. Taking on the historical significance of the 1929 stock crash and the Great Depression, Peaky Blinders brings its characters closer to the hearts of viewers. With all of the whiskey, sex, and violence of past seasons, Peaky Blinders takes Tommy and Co. into a new predicament that they’re struggling to get out of—just be prepared to wait two years for Season Six.