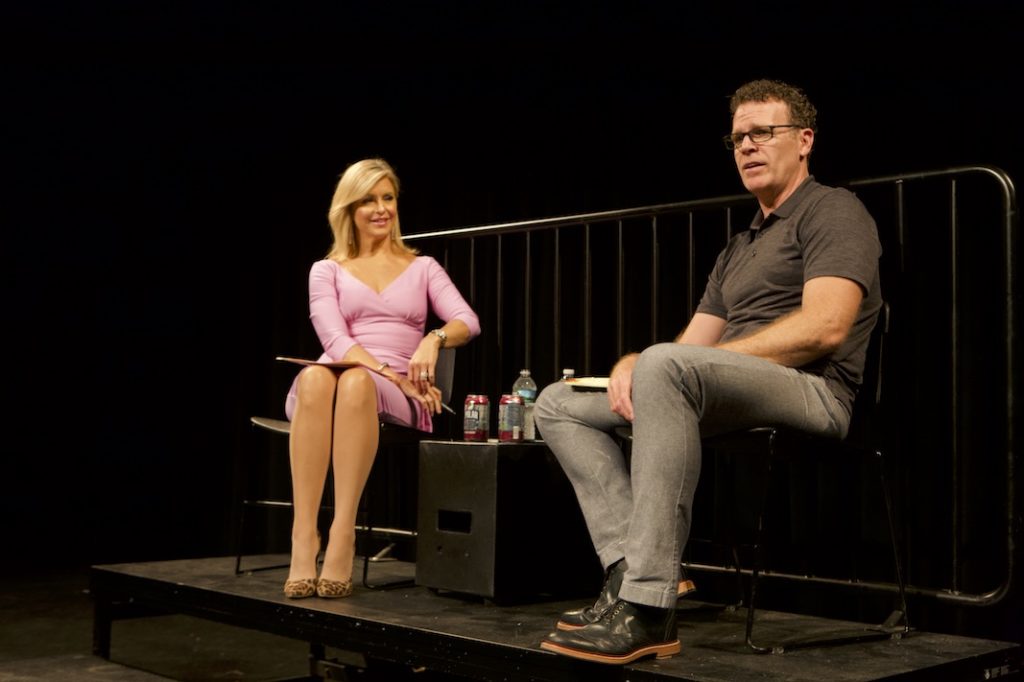 Actor Jere Shea and WBZ-TV News anchor Paula Ebben, both BC ’89, returned to their alma mater on Sept. 23 to have a conversation about their career paths and how they made it to where they are today.

Shea is known for starring as Hank Signa in the Boston TV series City on a Hill and has received a Tony Award for his performance as Giorgio in Stephen Sondheim’s Broadway play Passion.

Ebben co-anchors WBZ-TV News with Liam Martin at 5:30 and 8 p.m. and reports across WBZ-TV’s newscasts, including the station’s “Eye on Education” program. She has received an Emmy Award, an Edward R. Murrow  Award, and an Alfred I. duPont-Columbia University Award for her work in journalism.

Ebben and Shea were classmates at BC and became lifelong friends, as well as proud BC parents, after graduation.

“These are the kind of relationships that you’re forging right now at Boston College,” Ebben said. “You’re just going to meet some of the best friends of your life [here].”

Their friendship started in the spring of 1987, when they were in the musical West Side Story together. Ebben compared the experience of first hearing Shea sing to playing touch football in the Mods and having Tom Brady show up and ask to play quarterback.

“[Shea] got up and sang, and the voice of an angel came out of this guy,” she said.

But BC wasn’t so easy for Shea at first. The actor said that he wasn’t ready for school and— thinking that he maybe wanted to become a physician—he didn’t know what he wanted to study. But he did always know that he could sing.

“It was always something I loved to do,” Shea said. “I love to tell stories, and I am blessed with a voice, so I learned to use it.”

After finishing his BC acting career, which included productions of Chicago and West Side Story, Shea knew that he still needed a lot of work. He never would’ve gotten into the business if it weren’t for the foundation that BC gave him, but he admitted that he was far from perfect. Shea decided that he needed to go elsewhere and get some professional training.

Shea got into the Tisch graduate acting program at New York University, which he found to be quite challenging. As a kid from a blue collar neighborhood, he said he wasn’t used to “unzipping,” or showing his heart and being vulnerable.

“That was the thing that I struggled with the most out of school,” he said.

After NYU, Shea landed a role in the 1992 New York Shakespeare Festival production of As You Like It and eventually another in Sondheim’s Passion.

“It was too much for me to even really fully appreciate at the time,” he said.

But Shea, who was married with children, realized that the more work and success that he saw in the business, the less he saw his family. So he decided to quit acting.

Shea and his wife moved back to Massachusetts and raised their children, and Shea got involved with politics and fundraising. Eventually making his way back into acting, Shea landed a role in the Boston TV series City on a Hill.

Similar to Shea, Ebben also valued family, which prompted her to take a non-traditional path launching her career—although she mentioned that nothing is traditional that when it comes to careers that are on stage or in front of the camera.

“For men and women, I think it’s important to think about your whole life and not just about what you’re going to do,” she said.

There were two things that Ebben wanted: a career and a family. After Ebben got married—to the man who was once her RA at BC—she and her husband made the decision to have children sooner rather than later. They had four children in six years.

By age 31, Ebben turned her focus to her career. One of her friends, who was a reporter and journalist, helped her put a tape together, and Ebben got a job at a small cable news station in Worcester. She became an anchor in a top-10 market a year and a half later.

Ebben said that if people set goals and know themselves, they can achieve anything.

“Almost every successful person you’ll talk to will tell you [that] as soon as they decided to do it it happened,” Ebben said.

She also pointed out that both her and Shea married supportive people, which made all the difference.

“One of the most important career decisions, nevermind life decisions, is who you marry,” she said.

She credited the support she received in her marriage, along with her liberal arts education, as leading to her success. Journalists need to be able to bring many different talents to the table and embrace the changing market, and Ebben said she was able to succeed in doing so  because of BC.

“The Jesuits teaching about educating the whole person … [and] that really lends itself to being a journalist,” she said.

Featured Image by Nicholas Newbold / For the Heights

jere shea paula ebben city on a hill WBZ-TV
Sublime with Rome Turns Back Time at House of Blues
Eagles Open Season With Statement Win Over No. 15 Wisconsin