Two years ago, Boston College football headed down to Death Valley to face No. 2 Clemson, with the Eagles fresh off of a 29-point loss to Notre Dame. And, for three quarters, despite being five-touchdown underdogs and playing in front of 80,525 fans, BC hung with the Tigers.

The game went into the fourth quarter all tied up at seven apiece, and while Clemson pulled away quickly with 27 unanswered points to win, 34-7, it was still a resilient effort for three quarters. Now, the Eagles once again face a daunting test, and a similar performance would be nothing short of impressive. BC is 34.5-point underdogs in Saturday’s primetime matchup with the No. 4 Tigers—it’ll be on the ACC Network at 7:30 p.m.—and head coach Steve Addazio sees this year’s matchup with Dabo Swinney’s side as a chance to grow.

“The challenges will be high, but we’re looking forward to it,” Addazio said in his weekly press conference. “The team has a lot of energy, a lot of juice, excited, excited about the game … We’ve been down there a few times and here and had some wars, and our guys are well aware.”

If this game was after the Eagles’ tough road loss to Louisville, the atmosphere around the matchup might’ve been much more subdued. Instead, after a bye week and a dominant victory over North Carolina State, in which BC ran over the conference’s No. 1 rushing defense at will and impressed defensively, Addazio’s team has a much better chance of at least keeping it close in the early going.

Even that might be a tall task against Clemson, though. Despite dropping three spots in the AP Poll since Week 1 and losing the confidence of some pundits, the Tigers are still the defending national champions and have won 22 straight games. Swinney’s team is fresh off a 45-10 rout of the Cardinals, a game where Trevor Lawrence threw his seventh and eighth interception of the year—but then completed all nine of his pass attempts in the second quarter for 156 yards and a pair of scores.

The 35-point win still saw Clemson (7-0, 5-0 Atlantic Coast) take another step backward in the national polls, as the Tigers were jumped by the Buckeyes, coached by former BC offensive coordinator Ryan Day. Clemson is a part of a strange bit of history, as the last time a preseason No. 1 team fell three spots without a loss this far into the season was Notre Dame in 1971. The reason voters have been hesitant is clear: The Tigers beat No. 12 Texas A&M for their only real quality win, but the Aggies have since dropped out of the AP Poll, and Clemson also narrowly escaped a four-loss North Carolina side by a single point, while showing signs of regression from last year’s championship team throughout the first month and a half of the season.

Good luck telling Addazio that, as he had nothing but respect for how Swinney’s team has handled the noise around the team this season.

“They’ve won championships, national championships, conference championships. This program knows how to ride through the emotional ups and downs of everything,” he said. “You’re everybody’s big game. You’re taking everybody’s best shot. That speaks volumes to what Dabo Swinney and his staff have done down there to me. That’s very, very difficult to do.”

Swinney’s staff has been remarkably consistent, with the group including talented defensive coordinator Brent Venables. The last two seasons, Venables and his defense has held the Eagles to a total of seven points (last year’s touchdown came on a Michael Walker kick return) and just 351 combined yards. That’s a dominant effort, and it raises concerns with the fact that once Anthony Brown went down last year, BC was absolutely shut down offensively with backup EJ Perry in the game.

This year, the Eagles are throwing Dennis Grosel into the fray. There’s nothing like making your second career start in a stadium that is completely filled, entirely orange, and incredibly loud. Still, Addazio has faith in his quarterback’s ability to manage a game, mentioning his alert third-down scramble that jump started a 98-yard touchdown drive against the Wolfpack as one such example.

“He’s a pretty sharp guy,” Addazio said. “I think he handles all that really well. I think with Dennis it’s just game experience, just being in those games and all the unique things that come up in a game, and managing all of that.”

BC will likely once again attempt to lean on its rushing offense. Grosel attempted just 15 passes against N.C. State, and all but three of them came in the first quarter. It won’t be anywhere as easy to run the ball against Clemson, however, as the Tigers have allowed the fewest touchdowns on the ground (four) in the ACC and additionally are holding opponents to just 2.9 yards per carry.

If the rushing game can’t get going, the Eagles could be in for a long day at the office. Addazio knows this, and he heaped plenty of praise on Swinney’s side before a game that’s much less eagerly anticipated than last year’s College GameDay matchup.

“There’s no doubt in any mind that they’re the No. 1 team in the country—skilled, talented everywhere, proven it on the field,” he said. “So when I watch their tape, I see no weaknesses.” 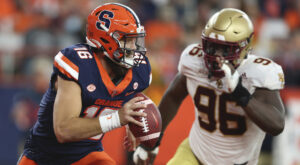