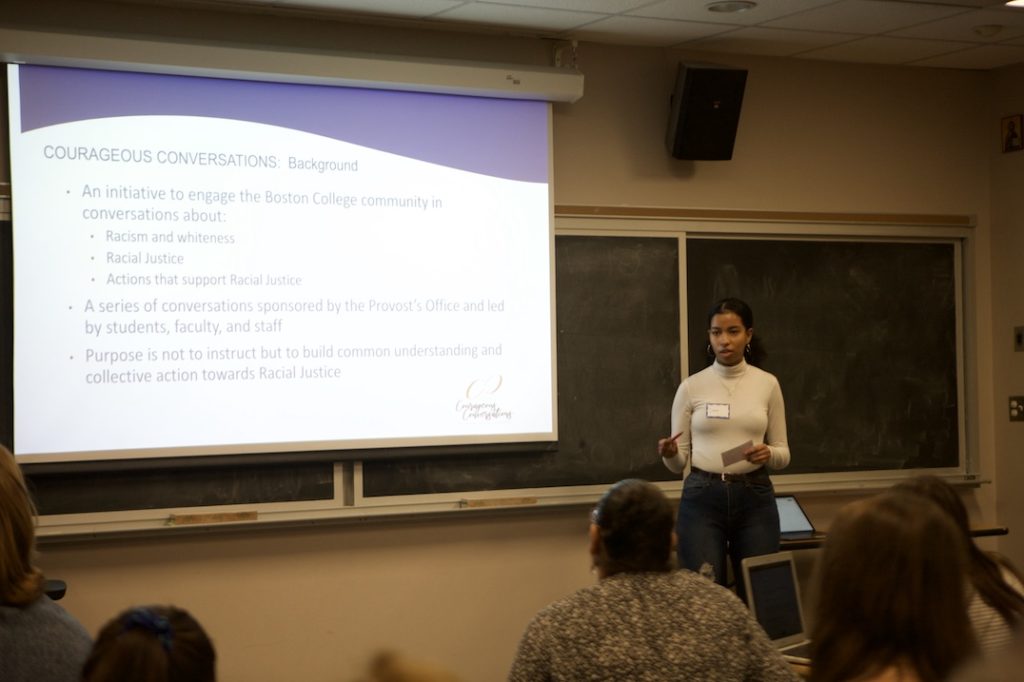 ‘Courageous Conversations’ Series Begins With a Discussion on Racial Justice

The Boston College Office of the Provost hosted the first of its “Courageous Conversations,” a new initiative that aims to foster discussion about difficult topics between faculty and students, on Tuesday. The inaugural edition was titled “What is Racial Justice” and focused on race and racism.

“One of the things we are trying to do in these dialogues is really, while recognizing intersectionality and all of those other ‘isms,’ is that we’re trying to keep the focus on race,” Sarr said.

Sarr said this event was “in part” inspired by the racist vandalism that occurred in Welch Hall last year.

“It’s not in direct response to that, I think what we are trying to do now is be proactive rather than reactive,” Sarr said. “So, like talking about blackface before Halloween is being proactive. You know, rather than waiting for an incident to happen and then responding. We’re hoping that having this conversation is a proactive way to, you know, understand that these conversations are important. Even if no incidents happen you know these are still important conversations.”

The session was intended to be based around conversation, rather than a lecture—the 25 faculty, staff, and student facilitators present split up to lead six small discussion groups after a brief presentation.

The evening began by establishing norms and standards for the conversation. Some of these included “avoid shaming or blaming yourself,” “be aware of intention versus impact,” and “to practice self-awareness.”

The discussion facilitators provided the audience with two “artifacts”: an SNL skit mocking the revelation that the governor and attorney general of Virginia had worn blackface in college and a CBS video that discussed the history and impact of blackface.

Blackface has a long history of being used in the entertainment industry. In the 1830s, white performers used blackface in racist minstrel shows, which black performers adopted in the 1860s, according to the CBS video.

The facilitators used the video to transition into a conversation about the use of blackface in Halloween costumes before asking their groups to write down a time when they witnessed someone wearing blackface or a racist costume. They also asked the audience to include how they responded and how they felt they should have responded.

The groups discussed why racist costumes made them feel uncomfortable and how to respond to these situations. They reached a consensus that proactive action and timely education are powerful tools in preventing instances of cultural appropriation and racist costumes.

Through the conversations, the groups also deemed it necessary to be considerate, informative, and understanding when confronting a person about a racist costume. They discussed how inciting shame can be harmful.

They also decided that normalizing instances of cultural appropriation can misinform people about what attire is offensive. These instances include wearing apparel of sports teams such as the Washington Redskins and the Chicago Blackhawks, whose mascots feature stylized images of Native Americans.

After the small group discussion concluded, everyone reconvened as a large group to share what they discussed. During this part of the session, the conversation turned to educational institutions and what they can do to better inform students about these issues. Together, the group determined that both K-12 schools and universities have a role to play in educating students about race and cultural appropriation.