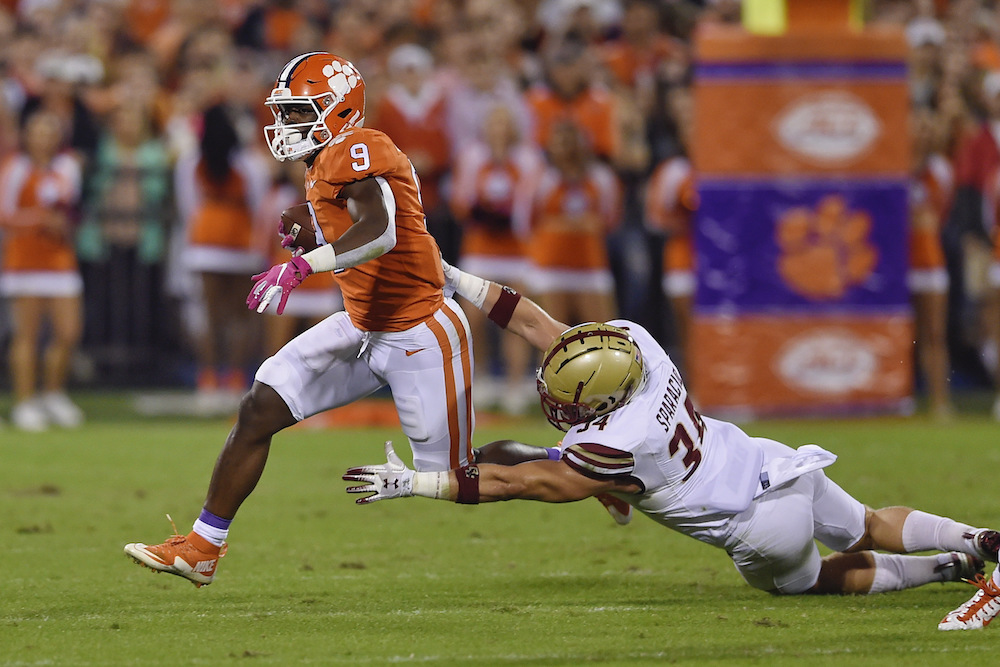 At the start of the second half, staring at a 31-point deficit to No. 4 Clemson, Boston College football came out strong. Marcus Valdez sacked Tigers’ quarterback Trevor Lawrence on the first play of the half, and the Eagles forced a punt. Then, AJ Dillon rattled off runs of 19 and 10 yards, the latter of which saw him become the program’s all-time rushing yards leader.

Immediately after that career-defining moment, though, Dillon couldn’t pick up a rushing Chad Smith in pass protection, and Smith strip-sacked BC quarterback Dennis Grosel. The ball was scooped up by Clemson’s Logan Rudolph and he rumbled 39 yards for the touchdown, squashing even the tiniest glimmer of hope for the Eagles en route to a 59-7 blowout.

“ I feel like we ran into a buzzsaw,” head coach Steve Addazio said after, per BC Athletics. “[I’m] disappointed that we weren’t able to play better than we did.”

For the fourth-ranked Tigers (8-0, 6-0 Atlantic Coast), it was just another day at the office against the woefully overmatched Eagles (4-4, 2-3). Clemson kicked a field goal on its first drive of the game, but then scored on each of its next five first half drives, building an insurmountable 31-point halftime lead.

The Tigers entered as 35-point favorites, and they nearly covered that spread in the first half alone. Quarterback Trevor Lawrence was nothing short of surgical, spreading the ball around the field to a variety of wide receivers. Lawrence was taken out of the game with nine minutes left in the third quarter after completing 16-of-19 passes for 275 yards and three touchdowns. Meanwhile, running back Travis Etienne displayed plenty of explosiveness—he had 109 yards on just 16 carries—as the Eagles’ defense struggled to keep up. The Tigers had 394 yards in the first half and surged out to a quick 17-0 lead, so the outcome was never in doubt.

BC knew that it needed to establish the run to have a chance to succeed, but went three-and-out on its first drive of the game and largely struggled to generate much on the ground. The Eagles managed just 66 yards on 25 first-half carries, and regularly were forced into 3rd-and-long situations. In those, BC didn’t have much going with quarterback Dennis Grosel, who went 3-of-11 in the first half and was pressured relentlessly by the Tigers’ defensive front.

Without a reliable run game, BC’s offense largely stagnated. The lone scoring drive of the first half was the one time it clicked as the Eagles took 15 plays to go 75 yards down the field. They had to convert a pair of fourth downs, opting for Dillon both times, and eventually punched it on on a well-executed play that saw Dillon waltz up the middle untouched for a nine-yard score. That cut the Tigers lead to 10, but Clemson was far from finished offensively.

Clemson built its early 17-point lead on a B.T. Potter field goal, a three-yard touchdown run from Etienne, and a 22-yard touchdown reception from Diondre Overton—who had three catches that were all touchdowns. After the Eagles answered, all the Tigers did was score on three of their next four drives. Etienne, who racked up 92 first-half rushing yards, rumbled into the end zone from four yards out. Lawrence then found Amari Rodgers on a dump off, and the speedy wideout beat several would-be tacklers for a 19-yard score. That stretched the lead to 24, but the Tigers increased it right before halftime with Etienne’s third rushing touchdown of the night.

The Eagles had a good start to the second half, forcing a punt and snapping the Tigers’ dominant offensive stretch, but that momentum was quickly erased by Rudolph’s fumble return touchdown. BC would punt on its next three drives while Clemson only added to its lead. During Lawrence’s last drive of the game, he followed up a 17-yard run from Etienne by connecting with Overton again for a 63-yard touchdown. In the span of two minutes, the Eagles went from having the ball to watching a 14-point swing drown out any hopes of a competitive second half.

Backup quarterback Chase Brice saw out the rest of the win for the Tigers, and there wasn’t a considerable dropoff at first. His first drive ended in a missed Potter field goal, but the second was a methodical 11-play, 96-yard drive that ended in Overton taking a wide receiver screen 34 yards to the house. BC also turned to its backups in the fourth quarter, with Matt Valecce coming in at quarterback while Patrick Garwo took the brunt of the carries.

Overall, it was a dismal showing from the Eagles, who had hoped to at least hang with Clemson for a quarter or two. Instead, BC was facing a 17-point deficit after the first 11 minutes and only struggled from there. The Tigers had no problem churning out yardage and racked up 674 yards, breaking the program-worst mark (664) that the Eagles had allowed to Louisville three weeks earlier.

BC wasn’t expected to win by any means, but turned in a dismal overall performance. Addazio was blunt in the postgame press conference, quickly turning all focus to when the team heads to Syracuse—who has yet to win a game against a Power 5 opponent—next week.

“Quite frankly, right now my mindset is we’ve got to go get ready to play Syracuse,” he said. “We’ve got a big game coming right around the corner.”