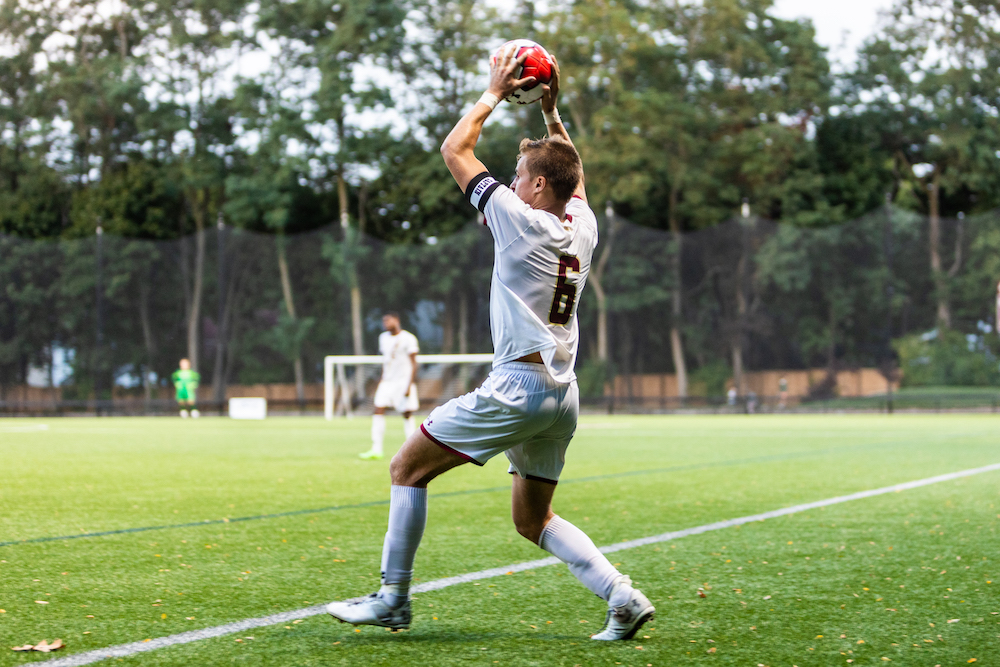 Two weeks ago, Boston College men’s soccer was more than pleased with an overtime draw against No. 1 Virginia. The Eagles hadn’t been able to generate any offense and needed an own goal from the Cavaliers, but a point is a point, and BC seemed to have plenty of momentum. Then, a heartbreaking loss to Louisville on the road followed, and Friday night’s game with No. 3 Clemson was more of the same.

The Eagles’ offense sputtered at Historic Riggs Field in South Carolina, managing a lone goal via a penalty kick, and the Tigers tripled their visitors in shots en route to a 3-1 win, securing a perfect home record on the season.

BC (7-4-3, 1-4-2 Atlantic Coast) welcomed goalie Giacomo Piccardo back from injury, and he split time with Christian Garner in the defeat. Piccardo largely looked up to speed, making three saves, but was caught in a tough spot in the 31st minute. With the game knotted up at zero, Clemson (13-1-1, 5-1-1) forward Robbie Robinson—the conference’s leading goal scorer—made a run into the box from the left side and took a right-footed shot that slipped past a diving Piccardo. Eagles defender David Longo made a sliding effort behind his keeper in an attempt to keep the ball out of the cage, but he was just short.

BC had been able to keep the Tigers off the board for the opening 30 minutes—no small feat, as Clemson entered with the conference’s top scoring offense at 3.85 goals per game—but now it was left searching for an equalizer. The Tigers had allowed exactly 14 goals in their previous 14 games, so trying to crack Clemson’s defense and goaltender George Marks wasn’t the best solution for the Eagles’ scoring woes.

Out of halftime, Clemson landed what seemed like a knockout punch with a goal just one minute and 35 seconds into the second period. Phillip Mayaka registered his eighth assist of the season, sending the ball into the box to Tanner Dieterich, who buried his third goal of the year past Garner. Garner, who filled in admirably for Piccardo over the last seven games, played the second half for Ed Kelly’s side.

The Tigers continued pressing, and in the 68th minute, James Brighton iced any hope of a comeback. The redshirt freshman caught up to a deftly played through ball from Grayson Barber, took a touch, and buried a low right-footed shot under Garner. Eagles defender Victor Souza came sliding in as well but was unable to get his body on the ball, and he laid back on the turf in disappointment as Brighton ran to the sideline, arms outstretched in celebration.

BC avoided the shutout in the 77th minute, but in a similar manner to the UVA own goal, it was a big mistake on the opponent’s part. The Eagles had a corner kick and, in the ensuing scrum, a Clemson defender got his hand on the ball. Joe Kellett stepped up for BC on the penalty kick and tucked it past Marks, who finished with two saves in the win.

Overall, it was a choppy match for the Eagles, who looked like they were playing catch-up with the Tigers for much of the night. Over the last few games, BC has largely impressed defensively—even in giving up large quantities of shots—but still suffers from occasional breakdowns, and that in turn leads to deficits that it can’t overcome. Going down 2-0 immediately out of halftime against a top-three team in the country is a recipe for disaster, and it robbed the Eagles of any chance at making the second half interesting.

BC’s offense badly needs to find a way to generate anything, as it managed just 11 shots to Clemson’s 27 on Friday night. In the Eagles’ last three games, they’ve been outshot by a combined 67-18. Yes, injuries have played a role—Kristofer Konradsson finally returned to the starting lineup against the Tigers, as did Amos Shapiro-Thompson—but the team as a whole has struggled to connect the defense up through the offense.

With two matches left, BC has an above-.500 record secured, and Harvard and Syracuse have both struggled this year. There’s a chance to finish strong, improve offensively, and go into the ACC Tournament with the hopes of replicating a performance like the win over then-No. 3 Wake Forest earlier this year. But if the Eagles can’t figure out ways to generate more offensive chances, they’ll likely limp to the finish line and could see an early exit in the postseason.