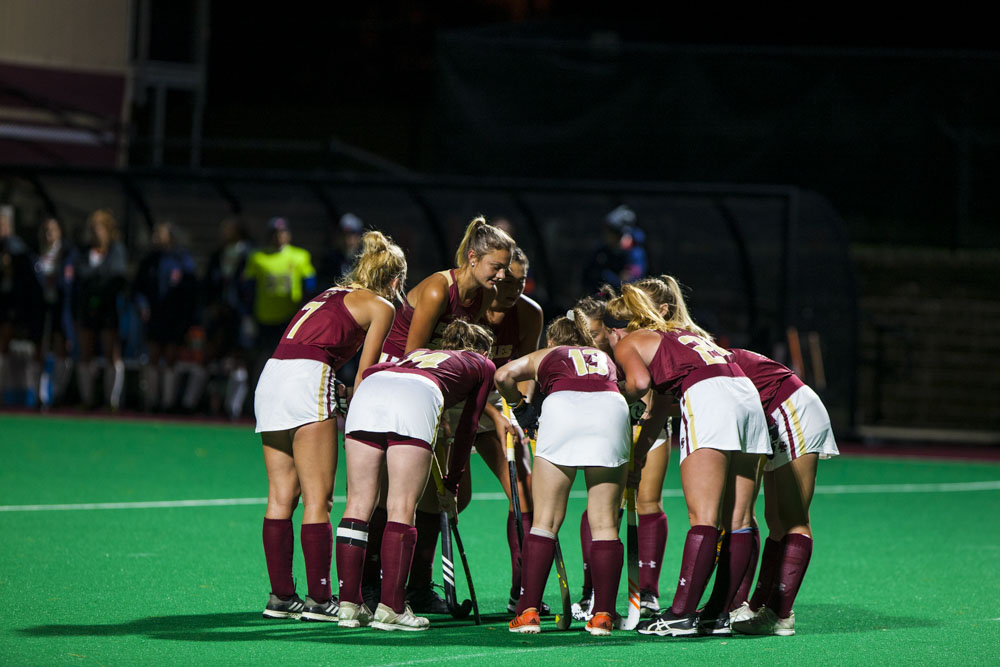 Since its shutout of No. 4 Virginia earlier this month, Boston College field hockey has only been gaining in momentum. The No. 13 Eagles brought a six-game winning streak into Chapel Hill on Friday night with a legitimate chance at a conference title. Boasting a winning formula of an impenetrable defense—BC had conceded one goal in six games—and a newly potent offense (courtesy of breakout performances by freshman Margo Carlin), it seemed as though there was no limit to what the Eagles could do next.

That was until they took to Karen Shelton Stadium to face off against No. 1 North Carolina, where their hard-nosed, scrappy effort fell just short, and the Tar Heels narrowly escaped with its second straight ACC regular season title, winning, 3-2.

Unlike previous games this year, the Tar Heels (15-0, 6-0 Atlantic Coast) were forced to stretch their legs under BC’s (10-6, 3-1) pressure, as the Eagles held them scoreless for the first 48 minutes of the game and even held a lead for five minutes. It wasn’t until the Tar Heels notched a wild goal in the final two minutes of regulation that dreams of an Eagle upset dissipated, as the anticipated three-peat conference champions came away with the victory.

BC didn’t make it easy, though, as the first two periods mirrored that of a stalemate. The Tar Heels faced scoring difficulties against the notoriously tight-knit BC defense, as goaltender Sarah Dwyer managed to get her body in front of every UNC shot attempt. Despite drawing a penalty corner eight minutes in, the Tar Heels couldn’t find the back of the cage. Instead, they were forced to redirect their attention to a strengthening offensive effort from the Eagles, who often managed to gain possession and consistently break into the circle. Drawing three penalty corners of their own in the final minutes of the period, the Eagles found it equally challenging to record a shot, leaving the score knotted, 0-0, heading into the second frame.

Both teams only managed to get one shot off in the next frame, as the score remained stagnant by the end of the half. The Eagles matched the Tar Heels as they elevated their level of play, and the period proved nearly identical to the first. It was BC, however, that moved the needle first.

With two minutes left in the penultimate period, BC’s Charlotte Von Huelsen sent a backhanded shot from the top of the circle to the back of the cage, staking the Eagles to a 1-0 lead. Her fifth goal of the season also marked the first time UNC has trailed in an ACC game this year.

The Tar Heels had a quick response, though, as Riley Fulmer tallied the equalizer just two minutes into the fourth frame. Feeding off this momentum, her teammate, Megan Duvernois, managed to bury a penalty stroke goal just three minutes later as UNC claimed the lead. It wasn’t sufficient to demoralize the Eagles, as Carlin drew a penalty corner to set up a goal by Elizabeth Warner shortly thereafter, tying the score at 2-2 in the final five minutes of regulation.

It was a test of grit from there, as the Eagles prepared for their biggest upset of the season. As the clock wound down to two and a half minutes of playing time, the Tar Heels made a final push to preserve their spotless record. Drawing two consecutive penalty corners within 10 seconds of one another, UNC managed to capitalize on the second, as senior Yentl Leemans sent a wild shot past Dwyer. The give-and-go proved enough to drain the clock and seal the Tar Heels’ victory, handing the Eagles their first loss since September 29.

Despite losing Friday night’s heartbreaker at UNC, BC has consistently shown that it’s one of the most competitive teams in the nation this season, having displayed considerable growth in the last few weeks. Forcing the top-ranked Tar Heels to fight to the final minute on their own field, the Eagles exhibited as much resilience in this matchup as in any of their victories. Should BC put up a similar effort heading into the ACC Tournament and likely beyond, the Eagles have a good chance to make some noise in postseason play.

BC Falls to No. 3 Clemson, 3-1
Behind Three-Goal Second Period, Friars Down BC