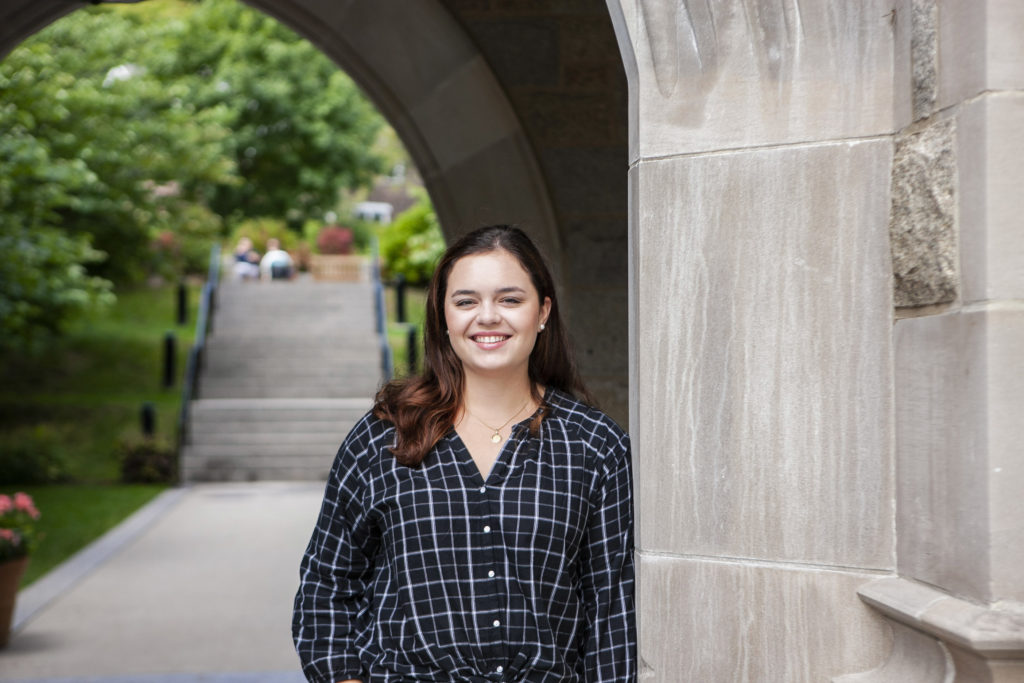 As the trees along Linden Lane begin turning from puffs of green to shades of red, yellow, and brown, shedding their leaves and leaving a carpet of crunch, summer transitions into fall—and most college students begin to ponder the process of applying for summer internships. Many find themselves behind desks in an office job, and some seek work at summer camps, while others pursue publishing or PR internship opportunities. Not many Boston College students can claim they spent their summer surrounded by convicted felons.

But Sydney Shugrue, MCAS ’20, can say just that. Shugrue spent her past summer working as an intern clerk within a felony criminal prosecution courtroom in Chicago’s (Cook County’s) State’s Attorney’s office, the second largest prosecutor’s office in the country.

The Cook County office is the second only to Los Angeles in size. It has over 700 attorneys working within it and encompasses all of Chicago, in addition to some of its surrounding suburbs. Shugrue worked specifically within the felony criminal prosecution sector, which involves larger offenses such as stolen vehicles, gun charges, drug charges, and murders.

Shugrue was first presented with the opportunity to work in Cook County’s State’s Attorney’s office in high school while on her mock trial team. All of her coaches were current or past state attorneys. After spending the fall of 2018 at a financial planning firm, McAdam Financial, Shugrue was looking for a more fast-paced environment that was geared toward her interest in law. Through her old connections with her coaches, she was offered a spot to work at Cook County and capitalized on the opportunity.

In her day-to-day work as an intern clerk, Shugrue copied the hundreds of documents that are produced when someone is arrested, arraigned by the grand jury, and charged with a crime. The documents can include the grand jury transcript, arrest report, previous criminal history, and any preliminary inventory that the police have sent. This preliminary inventory can range from a gun found in the house where someone was picked up to a piece of mail that would indicate proof of residence, or any photographs taken by the police of the scene or a potential victim. Everything must be copied because the defense has equal access to whatever the prosecution has.

Besides her responsibility to copy forms and evidence, Shugrue would often watch the hours of videos of the body and car cameras of police officers to determine if the defendant or witnesses made any statements that could implicate the defendants during the trial. She also sorted through the documents and videotapes to identify material or evidence that the prosecution team could use if the case went to trial.

Some of these tasks may initially seem tedious, but Shugrue’s responsibilities were vital to the judicial operations of the courtroom. In her specific courtroom, there are only three attorneys responsible for over 350 active cases—with an additional incoming one to five new cases per day. If she were not making the copies, the attorneys, such as Nora Gill, would have to do so, all while handling their assigned cases directly.

“She made our jobs a lot easier this summer, having her here,” Gill said. “I think her desire to make the most out of her summer here was beneficial to both of us, because she really did get a lot out of the [experience], but also she was such a big help to us.”

Though Shugrue recognized the importance of the role she served, she also found her time in the prosecutor’s office to be nothing like A Few Good Men or Law and Order had previously led her to believe.

“I think, as many people do, that I had an idealized view of this system in that someone is arrested, and they go to trial next week,” she said. “It does not happen like that. A lot of the big cases, particularly murder cases, they don’t go to trial for years. It can take up to five years. There’s a lot of little things that go into it, which I didn’t realize.”

Cases can also be prolonged due to incredibly frustrating factors. The defense may argue many motions to eliminate certain information as evidence due to it being gathered unlawfully, among other reasons.

“Sometimes witnesses don’t show up, or the defendant last minute decides to plead guilty, or the defense decides that they want more time,” she said. “So, you never really know if a trial is going to go until the day comes.”

Every witness must be present in order for the trial to proceed. Shugrue recalls certain cases where the witness simply forgot to come in on the specific day. Also, police officers who must be there may be on vacation or maternity or paternity leave, which can slow down the process even more. As a result of such delays, trials are usually postponed by a few months.

Although Shugrue mostly learned about these procedural measures through her day-to-day desk responsibilities, she was also able to directly observe the offenders that the prosecutors put on trial in the courtroom. Spending her summer days in the presence of convicted criminals was initially an adjustment, but Shugrue soon embraced the experience.

“I wasn’t scared,” she said. “I think I was just curious as to why certain people commit certain crimes, like how do you get to that point? How do you do it knowing the consequences? Or perhaps you don’t understand the full extent of the consequences.”

Working in the courtroom also provided Shugrue with a new perspective about the people in her community, as she was forced to step out of her comfort zone. Describing her home as a “bubble,” she appreciated the opportunity to gain new insights regarding the city of Chicago. In addition, Shugrue saw the families of the victims and defendants in murder trials firsthand, making her realize that people forget how hard it can be on the families of both sides.

Having witnessed many trials over the course of the summer, Shugrue left with some fascinating perspectives on the criminal prosecution system in general. She learned that many of the crimes committed aren’t premeditated. As a result, Shugrue’s experience begs the question—what can she and the attorneys she worked with do to help reduce the crime rate in Chicago?

Shugrue observed that the main issue with the criminal prosecution system is the sheer number of cases in each courtroom. Streamlining the process is difficult because the defense can prolong the case as long as they desire—the government cannot force them to plead guilty or participate in a trial. Moreover, the issue lies not only in the process itself, but also socioeconomic patterns in Chicago.

“It’s a systemic issue, and it goes all the way down to family and education,” Shugrue said. “Simply changing one thing isn’t going to help because [crime] is so ingrained in society at this point.”

After experiencing desk work in McAdam Financial, and then witnessing the fast pace of the internal operations of Cook County State’s Attorney’s Office, Shugrue is ready to pursue a career that will continue at brisk speed. A self-described people person, Shugrue doesn’t just want to sit idly in front of a computer screen.

So, when asked if she could see herself continuing to work in the field of prosecution, Shugrue was all in. She hopes to transition into working with sexual assault and domestic violence police units, rather than the general felony prosecution sector. Doing this would allow her to focus on a single case at a time.

“I realized back in high school that whatever I want to do, I don’t just want to be sitting at a desk by myself crunching numbers,” she said. “I want to do something that involves working with other people, public speaking, and really doing something that makes a difference—even if it’s just to one person.”