Home » 102nd-Minute Own Goal Sinks BC in ACC First Round 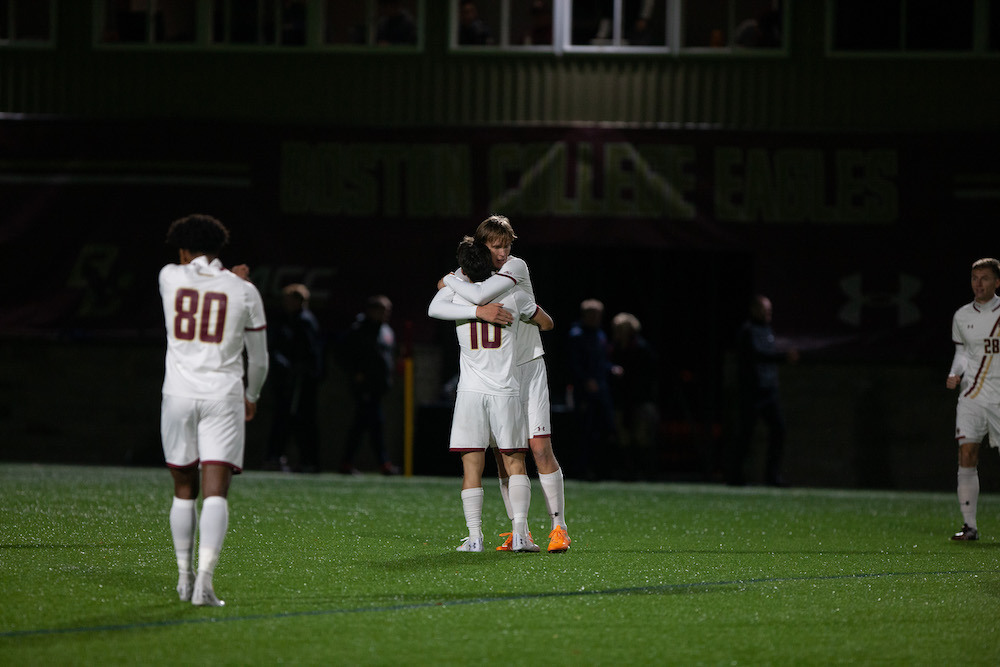 102nd-Minute Own Goal Sinks BC in ACC First Round

In a thrilling contest in South Bend, ninth-seeded Boston College men’s soccer and No. 8 Notre Dame played to a 1-1 deadlock through 100 minutes of action in the first round of the ACC Tournament. The Eagles had adopted a much more physical style of play, while the Irish struggled to convert on a plethora of set pieces.

So, it came down to the second period of overtime, and there was hardly a moment to catch your breath. BC goalkeeper Christian Garner had already turned away a point-blank effort in the first overtime period, while teammate Mike Suski had several potential chances on the other side of the field. But, just as quickly as anticipation of penalties was rising, the game—and the Eagles’ hope of making some noise in the conference tourney—came to a screeching halt.

In the 102nd minute, BC freshman defender Alejandro Zimmerman slid in to break up a cross attempt from Notre Dame’s Aidan McFadden, but inadvertently struck it into the upper left corner of his own net, a heartbreaking own goal that handed the Irish a 2-1 double overtime win and a date with top-seed Clemson in the quarterfinals.

Zimmerman had turned in 60-plus quality minutes off the bench for the Eagles (8-5-3, 2-4-2 Atlantic Coast), but was left on his knees, punching the turf of Notre Dame’s Alumni Stadium in frustration after the costly mistake. Still, all is not lost for head coach Ed Kelly’s side, as BC slots in at 23rd in RPI and has a not-so-slim chance, per RPI Update, to slip into the 48-team NCAA Tournament field as an at-large bid—for the first time since 2016.

Notre Dame (10-6-1, 3-5) further cemented its case as an at-large bid with the win, erasing a 1-0 first-half deficit before capitalizing on the double-overtime blunder to win its third match in a row. The Irish entered flying high, having knocked off No. 7 Wake Forest and Pittsburgh, and absorbed an opening salvo from their visitors before escaping late. Notre Dame finished with a slight 16-10 edge in shots and played a much cleaner game, with the Eagles registering three yellow cards to its one.

In the first 20 or so minutes, both teams probed for weaknesses in the opposing defense. Several players settled for shots from distance, but it wasn’t until the 21st minute that anybody had any luck. Lasse Lehmann forced a turnover at midfield and played a pass up ahead to Stefan Sigurdarson, and the star freshman created a bit of space before burying a low, hard shot past Notre Dame keeper Duncan Turnbull into the bottom right corner.

The rest of the half was largely marked by Irish offensive dominance, with Garner turning away a free kick from Felicien Dumas in the 33rd minute, then punching out a dangerous ball on a corner kick. Notre Dame’s Michael Pellegrino got a foot on the rebound, but the follow-up skipped harmlessly left. The Eagles seemed like they had cause to celebrate with less than two minutes to play when Alex Mieles slotted home a through ball from close range, but the referee called it back for offsides.

Notre Dame amped up the pressure again out of the break, pressing forward with ease. In the first five minutes, the Irish had five corner kicks, but couldn’t get any good looks. Garner came out a few minutes later to snag a header from Quinton Phillips, but other than that was untested. Finally, in open play, Notre Dame broke through.

In the 61st minute, Jack Casey sent a perfectly-placed through ball to Ian Aschieris, who had set up directly in front of BC defender Victor Souza in the middle of the box. Aschieris, who had yet to score a goal this season, deftly headed it to Garner’s left and it snuck inside the far post for the equalizer. The Irish very nearly won the game in the 80th minute, when Jack Lynn was in on net and only seemed to have Garner to beat. The ball kicked off the keeper’s hip and looked bound for the back of the goal, but David Longo flew in with a goal-line clearance to force extra time.

The best chance for Notre Dame in the first overtime was called back for offside, while BC’s only true look—from Suski—was taken from a hard angle and turned away easily by Turnbull. It all came down to that fateful McFadden cross and Zimmerman’s painful mistouch just two minutes into the second overtime period.

Garner couldn’t believe it, but soon the rest of the team was taking turns comforting Zimmerman—most notably fellow freshman Amos Shapiro-Thompson, who embraced his classmate and seemed to tell him to keep his chin up. It was a tough defeat to swallow, especially as the Eagles seemed poised early to advance, but Notre Dame did end with the balance of chances and would’ve had the home advantage if it went to penalty kicks.

BC’s season isn’t necessarily done, but it’ll have to root for very chalky conference tournaments as to avoid any potential bid stealers. The Eagles are 23rd in the country in RPI and currently sit 11 spaces above the cut-off point, per RPI Update. The NCAA Tournament bracket will be announced on Monday, Nov. 18 at 1 p.m.

Featured Image by Nicholas Newbold / For The Heights