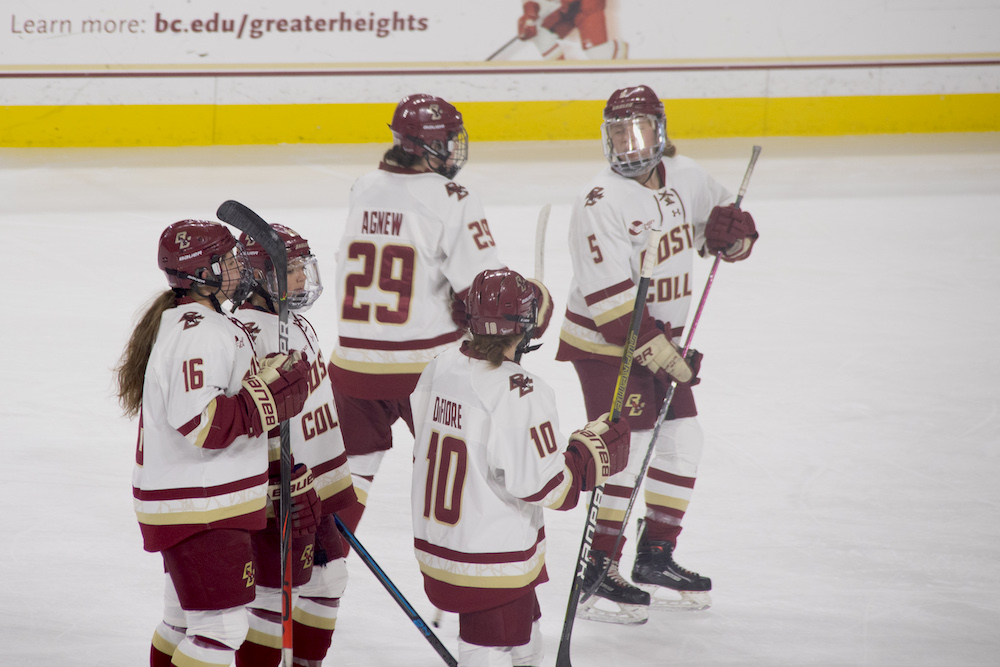 Since the puck dropped in late September, Boston College women’s hockey has been a force to be reckoned with. Behind balanced scoring­—the Eagles have had 12 different players record at least one goal through the first 10 games of the season—and a tight-knit defense, BC has landed in the top five of nearly every national poll, establishing itself as one of the most lethal teams in the country.

So, when the No. 5 Eagles entered Storrs, Conn., with an unbeaten record and one of the most potent offenses in the program’s recent memory, it seemed inevitable that they were prepared to tally another in the win column against Connecticut. That was until they found themselves trailing, 3-1, after the first period following one of the most impressive Huskies performances this season, ultimately dropping their first game of the year, 5-2, in Freitas Ice Forum.

UConn (6-4, 3-2 Hockey East) caught BC (9-1-1, 8-1-1) sleeping, striking first within the opening 55 seconds of regulation. Taylor Wabick notched her first goal of the season, sending home a wrist shot to leave the Eagles trailing inside the first minute of the game. After the scoring play, BC ramped up the aggression on the defensive end of the ice but faced difficulties scoring against an equally attentive Huskies defense.

A cross-checking penalty on Wabick gave the Eagles a quality look on the power play, but Jillian Fey’s doorstep bid fell just short, courtesy of a save by Morgan Fisher. The goalkeeper quickly found herself in a one-woman battle against the Eagles, as BC found a way to navigate the UConn defensive strategy and began peppering the goal. The Eagles’ Savannah Norcross surged into the zone after receiving a clean pass up the ice from Deirdre Mullowney, but Fisher managed to single-handedly keep the Eagles at bay with a right pad save.

The Huskies’ offense took off after the scoring scare, as Wabick seized possession and registered another power-play goal, cushioning the lead, 2-0. Delaney Belinskas cut the celebration short, however, responding in kind by putting the Eagles on the board just moments later. Tipping home a centering pass from Erin Connolly, Belinskas managed to keep BC within striking distance and cut the UConn lead to 2-1. Tallying her 75th career point, she became just the 32nd player in program history to reach the mark.

The Huskies refused to head into the second period without a response. Following a scrum in front of the cage, UConn’s Viki Harkness found a way to stuff the puck home at the left post just seconds before the start of the second period, extending the Huskies’ lead to 3-1 as the clock wound down.

BC was plagued with penalties in the second period, as the Eagles were immediately down one after a hooking call on Belinskas. Goaltender Maddy MacArthur managed to keep the score stagnant, stopping the puck for three saves on point shots before the Eagles were back to full strength. Unable to capitalize on a power play of its own, the BC offense quickly began to fray, as a checking penalty on Alexie Guay set the stage for two minutes of 4-on-4 action. Just when it seemed like the Eagles were going to dodge another bullet, Natalie Snodgrass put the puck in the top shelf for a 4-1 Huskies lead. With the rest of the period mirroring that of a stalemate, the Eagles entered the final frame with a lot of work to do.

Regardless of the three-goal deficit, the BC offense refrained from floundering at the start of the third, as Belinskas slotted her second goal of the evening with assists by Maegan Beres and Guay. Slicing the Huskies’ lead to two, the Eagles appeared to reclaim momentum when a UConn hooking call handed BC its most important power play of the game. Once again, despite aggressive attempts by the Eagles, Fisher managed to consistently get her body in front, stoning Lindsay Agnew as the power play expired. Just moments later, the goalkeeper managed to glove down a look from Kelly Browne to maintain the Huskies’ lead.

Things got controversial as BC went on the penalty kill with much protesting after a roughing call on Agnew. With eight minutes left in regulation, the Eagles were forced to string together one of their most important defensive stands of the game, but it didn’t prevent the Huskies from lighting the lamp. After a lengthy review, officials overturned a call on the ice to solidify a power-play goal by Harkness, giving UConn its fifth and final goal of the game.

With two regular season games against the Huskies remaining on the schedule, the Eagles have plenty of time to bounce back from an otherwise shocking loss. Plagued by sloppy errors and uncharacteristic scoring difficulties, BC can largely chalk this one up to a bad day. The Eagles will likely head back to the drawing board after an uncharacteristic performance in an effort to turn in a cleaner performance against rival Boston University next weekend.