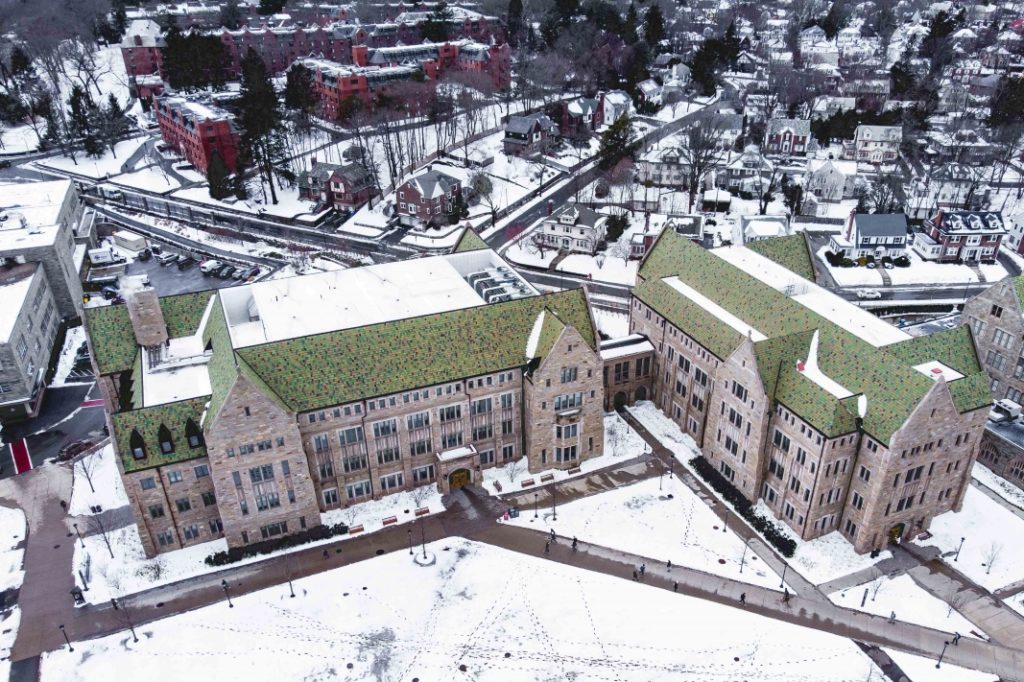 The Edmund H. Shea Jr. Center for Entrepreneurship hosted the fifth annual Elevator Pitch Competition on Wednesday. The panel of judges awarded first place to EmployMint, presented by Jacob Small, CSOM ’20. The startup helps small and midsize employers reduce the chances of their employees quitting due to emergency financial crises.

In the competition, the 11 finalists from the initial 35 startup teams had to pitch their ideas to the judges in 60 seconds, then participate in a two-minute question round. The finalists advanced through a series of preliminary pitch competitions with screening judges from the Shea Center.

This year’s panel of four judges included Joe Popolo, CEO of Charles & Potomac Capital and BC ’89; Amy LaCombe, associate dean of undergraduate curriculum in the Carroll School of Management and BC ’90; Peter Bell, general partner at Amity Ventures and BC ’86; and Meredith McPherron, venture partner at Glasswing Ventures.

As prominent donors for the Shea Center, Joe and Chris Popolo delivered the opening words at the competition. They commended BC’s expansion of academic and career resources in the past decade and praised the Shea Center’s role in encouraging students’ innovation and risk-taking.

Throughout the course of the competition, the audience was invited to vote for its “crowd favorite.” To eliminate potential bias due to the order of pitch delivery, one round of voting took place after the first five pitches and another one took place after the latter six. The winners of each round redelivered their pitches at the end of the competition, and the audience members voted on their favorite between the two.

This year’s “crowd favorite” was Mac Daddy—presented by Linda Chen, MCAS ’20, who received a $250 prize.

Mac Daddy is a social media app that aims to help college students form more meaningful relationships: When a user connects with another user, the app initially reveals only what the two have in common. The users’ full profiles only become visible after both sides agree to further develop their connection. Chen told how she and many of her peers felt pressured to keep a desirable online presence and were unable to develop meaningful relationships.

“It’s a huge problem for our generation that social media makes it so hard for us to be real,” Chen said.

“Forty percent of American adults don’t have $400 in savings for emergency,” Small said. “This means a car breaking down, an unexpected student bill, or a medical expense can cause financial ruin for tens of millions. But this is also an issue for employers, because it costs $15,000, on average, to replace each employee who was forced to leave due to financial instability.”

The $500 second-place prize went to Sucker Punch, presented by Meghan Schlageter, MCAS ’22. Schlageter’s bug-spray startup differentiates itself from the vast group of competitors by being all natural, DEET free, and pleasant smelling, she said.

The product contains grapefruit oil, which effectively masks the odor of other chemicals and allows it to smell better than other bug sprays, according to Schlageter. She said her company also seeks to increase environmental sustainability by allowing customers to send in empty containers for a discount on their next order.

“We want to revolutionize the way that people use bug spray and make safety not only attainable but attractive and friendly,” Schlageter said.

The judges awarded the $300 third-place prize to Palette, presented by Zier Wang, MCAS ’21—who created an online marketplace for college artists.

Wang found that complexities in selling art on websites such as Amazon and eBay discouraged artists such as himself from freely creating artwork. Palette is not only easier for college artists and potential customers to use, but it also allows artists and their clients to foster more personal connections.

“Palette cuts down the complexity of e-commerce and enables students to focus on community-centered arts,” Wang said. “Consumers on the other end can interact with college artists, customize art pieces, and get a faster delivery.”