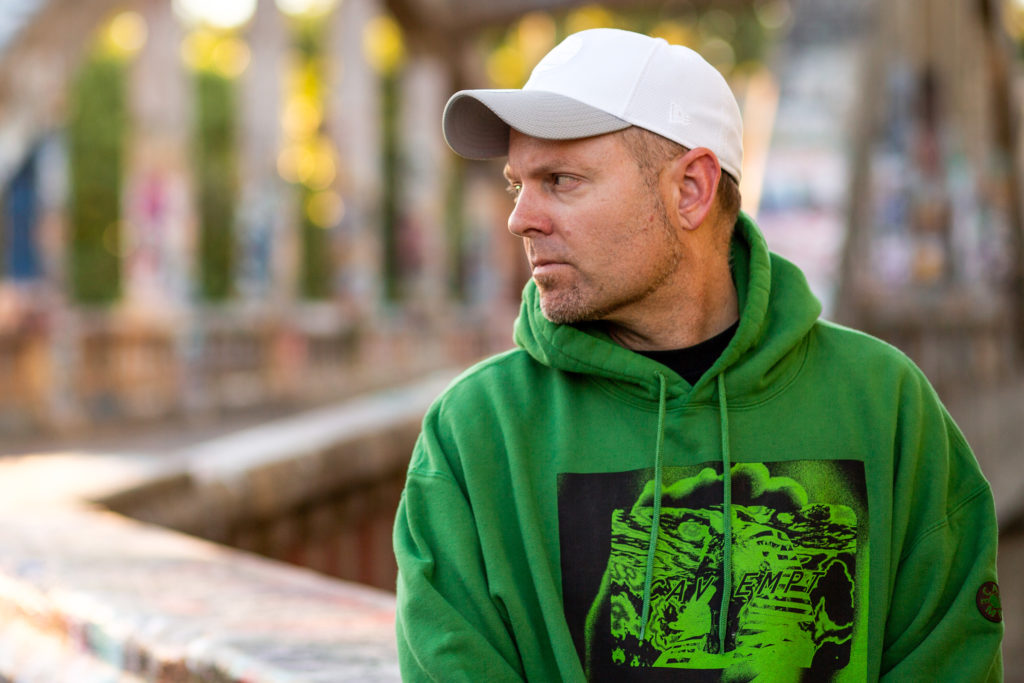 Joshua Paul Davis, better known as DJ Shadow, burst onto the scene in 1996 with Endtroducing….., his groundbreaking debut album composed entirely of samples and created on an MPC60, a sampling tool released in 1988. Since then, incredible leaps in technological progress have been made: artificial intelligence, gene editing, the iPhone. Despite DJ Shadow’s reliance on technology throughout his career, he is concerned about the consequences of rapid development.

Now 47 years old, he takes aim at our increasingly isolated, fractured society amid technological advancement on his new project, Our Pathetic Age.

The album is a double-LP effort that clocks in at over an hour and a half. The first 11 tracks are instrumental hip-hop beats that harken back to DJ Shadow’s earlier work. Paranoia, skepticism, and isolation are prevalent themes in the first half—ideas that are further explored in the second half, which features more traditional hip-hop tracks with contributing rappers and vocalists. DJ Shadow creates a dystopian image of the future on the first half of the album, one ruled by robots and void of emotional intimacy, then explains where we went wrong to get there on the second half.

Despite his suburban upbringing in California, DJ Shadow made important contributions to Britain’s trip-hop movement in the ’90s. This new fusion of electronica and hip-hop was abrasive and intense, yet found mainstream success with groups like Massive Attack and Portishead. On Our Pathetic Age, DJ Shadow incorporates trip-hop into the instrumental half of the album while also continuing his practice of drawing from a diverse range of influences.

The first few tracks feature racing, intense drum beats with electronic elements that fuel a dystopian feeling of paranoia. One could imagine these tracks functioning as a soundtrack for a new Matrix or Blade Runner movie. In addition to trip-hop, these first few tracks bring to mind the avant-garde instrumentation of Radiohead’s Kid A. Early tracks like “Slingblade” and “Intersectionality” feature pulsing drum machine beats similar to “Idioteque.” Thom Yorke’s chorus on the song warning millennials of impending doom would also fit right in on DJ Shadow’s new project.

The second half of the album sees DJ Shadow explaining his disatisfaction and laying out societal issues that he feels need to be addressed. He is joined by rap veterans such as Nas, De la Soul, Run the Jewels, Pusha T, and even some members of the Wu-Tang Clan. The influence of ’90s boom-bap production on DJ Shadow’s work is more readily apparent on this second half that pairs his hard-hitting instrumentals with compact, elevated rhyme schemes.

The first track on the second half, “Drone Warfare,” features Nas and Pharaoahe Monch voicing their fear about the government’s abuse of power through technology over wailing sirens and electronic static. On his first verse, Pharaoahe Monch raps, “Now I duct tape the cam on a Mac Pro / When I’m in the kitchen when I’m whispering about stupid ass politicians, my smartphone’s listening / The climate changed condition when / It’s like I’m smoking a pack a day / But never nicotine though, the air quality is sickening.”

One only has to look at track titles like “Rocket Fuel,” “C.O.N.F.O.R.M.,” “Urgent, Important, Please Read,” and the interlude “I Am Not a Robot” to understand what DJ Shadow is getting at. That said, a rare glimpse of optimism is also one of the album’s high points. On the track “Kings and Queens,” a stirring gospel chorus fits perfectly with motivational verses from El-P and Killer Mike of Run the Jewels. It is one of the few moments on the album where a brighter future seems possible.

DJ Shadow also breaks his emotional detachment from society on the stirring instrumental tracks “If I Died Today,” “My Lonely Room,” and “We Are Always Alone.” The last song on the first half, “We Are Always Alone” features a sparse piano melody that recalls revolutionary producer Brian Eno’s somber track “By This River.” DJ Shadow’s varied influences are never more apparent than on these tracks that diverge from the apathy pervading the rest of the album. Oddly enough, on a record defined by artificiality and automation, the best moments often arrive during the most sentimental songs.

All in all, DJ Shadow’s latest album is yet another solid project from the veteran producer. He continues to prove why he is one of the most innovative minds in the industry and why he is essential to pushing electronic and hip-hop production forward. Still, with all the talk of robots taking over the world and the government tapping our conversations, there really is only one thing left to say to DJ Shadow: Ok, boomer.

DJ Shadow
The Dynamics Mix Traditional, Modern A Capella Styles at Fall Invitational
BC Drops Second Straight, Falls to Providence on the Road