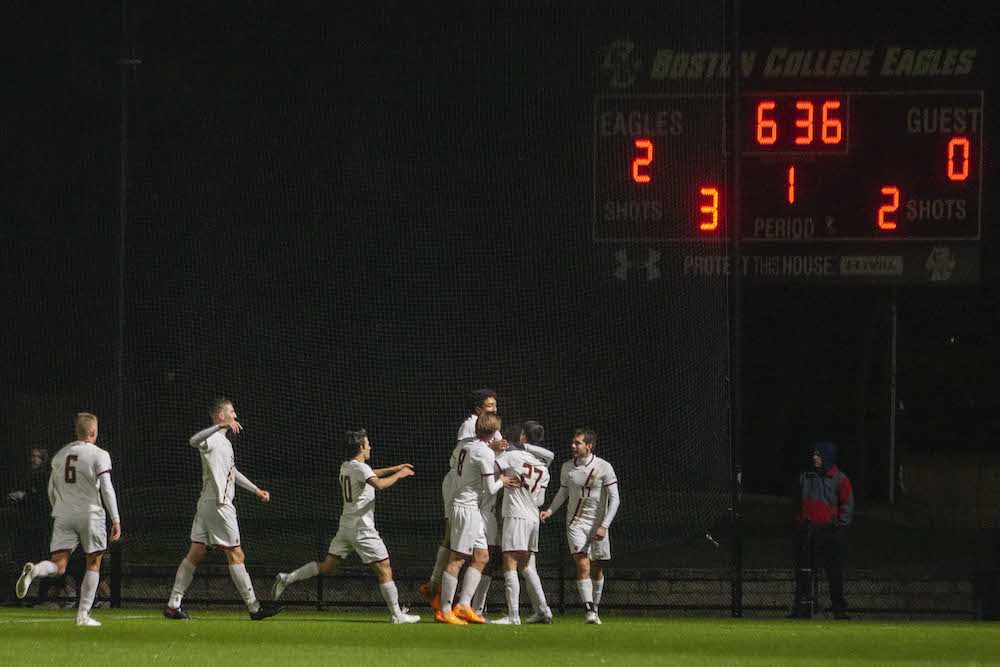 They say that 2-0 is the most dangerous lead in soccer, but that definitely wasn’t the case for Boston College men’s soccer tonight. In a high-stakes, first-round NCAA tournament game against visiting Yale, 2-0 proved to be just the right start for the Eagles.

In 11 of its last 12 games, BC hasn’t scored more than two goals, but tonight played out to be a different story. In a well-fought battle, the Eagles racked up three goals in the first half to shut out Yale and advance to the second round of the tournament.

The first half proved to be the difference maker for the Eagles (9-5-3, 2-4-1 Atlantic Coast), as they scored all three goals of the game in those 45 minutes. After the break, the Eagles took a more defensive stance, parking eight or nine players behind the ball at all times.

“That’s not enough,” said associate head coach Bob Thompson on going up 1-0. “In the NCAA tournament, the guys expect that [the opponent is] going to be dangerous, so we wanted to keep the pressure on.”

Though the game seemed evenly matched throughout all 90 minutes, Konradsson’s first goal gave BC the momentum shift it needed to bounce back from a heartbreaking loss in the ACC tournament.

A continuous offensive push gave the Eagles their second of the night at the hands of Mike Suski. Tyshawn Rose powered the ball to the endline before giving a cross to the top of the six-yard box for Suski to tap in.

Being up 2-0 gave the Eagles all the cushion they needed, but they refused to become complacent. Suski paid it forward just four minutes later. He picked up an assist as he brought the ball to the endline to give Stefan Sigudarson a tap-in shot and seal the Eagles’ victory.

Even so, the Bulldogs refused to roll over, giving BC a hard fight until the final whistle. Yale had 12 shots to BC’s 13 (six and seven on goal, respectively), and four corners to BC’s two. They had lots of chances up top, but a rock-solid back line and a stellar performance from sophomore goalkeeper Christian Garner kept the ball out of the net.

“Getting three before half really helped us,” said Thompson. Being up three meant the Eagles could take a more defensive stance in the second period, a point that has been a strong suit of theirs all season.

Throughout the second half, BC kept eight or nine men behind the ball at all times, leaving just two forwards up top to control the offense.

“They’re a really good team,” Thompson said. “We didn’t want to give them a goal that they could get momentum or some energy off, so we were really trying to close it out.”

The second half passed without much fanfare, as neither team had many strong chances. The closest Yale got to scoring came before what looked like a goal got called back on an offsides decision, and save for a few long balls over Yale’s defensive line, BC didn’t have many chances up top either.

Overall, BC played a well-balanced team game. The team, from front to back, worked well with each other, stringing together three goals by three different players and creating plenty of chances. The back line also stayed connected for all 90 minutes, not allowing a single breakaway or open shot up the middle.

As the Eagles prepare to head to Seattle to face No. 6 Washington in the second round, this game should stay in the backs of their minds. BC looked sharp from the first whistle to the last, and if they can keep up the momentum, their playoff hopes look bright.

“We’ve had games where we’ve had moments that were better than others, [but] I think this was one of our strongest games from start to finish,” Thompson said.