Home » With Bowl Eligibility at Stake, Addazio Looks Ahead to Pittsburgh 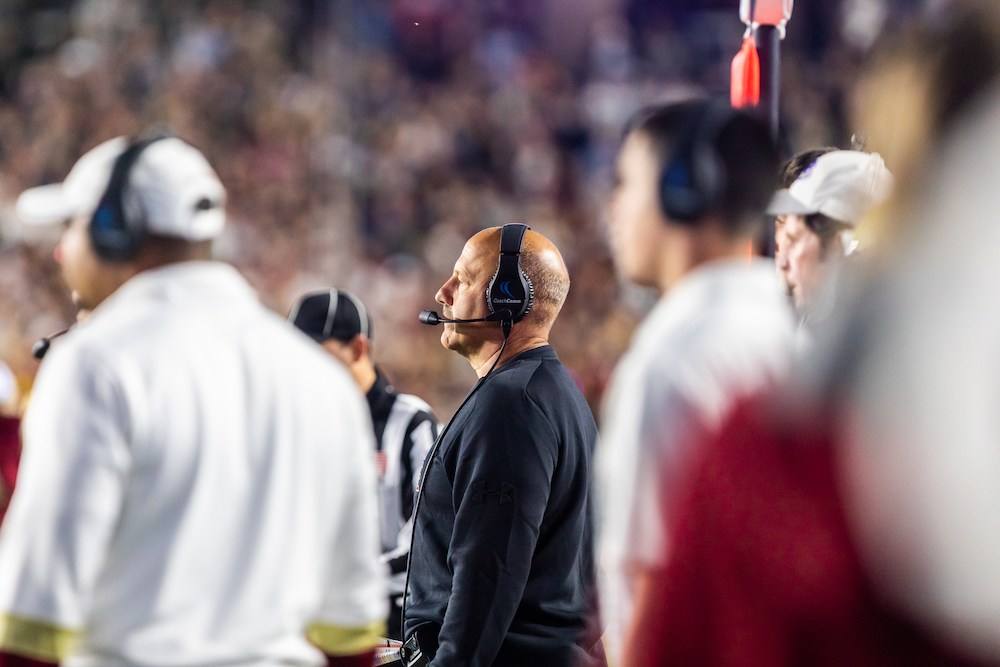 With Bowl Eligibility at Stake, Addazio Looks Ahead to Pittsburgh

Boston College football is in danger of missing out on the postseason for the first time since 2015, a year in which the Eagles started four different quarterbacks and finished winless in the ACC. Nonetheless, Addazio, now in his seventh year at BC, isn’t looking at BC’s regular season finale at Pittsburgh (7-4, 4-3 Atlantic Coast) any differently.

“Nothing different,” he told reporters at Monday’s weekly presser, per BCEagles.com. “Just go straight ahead and keep moving. Every week’s the same. Just kind of—same Sunday, same Monday, same Tuesday, same Wednesday, nothing different. Just get prepared, go out, and have a great plan, and keep your motivation high.”

BC (5-6, 3-4) is coming off a 40-7 road loss to No. 15 Notre Dame, its second consecutive defeat. For the fifth time this season and the fourth time in the last six games, the Eagles gave up more than 500 total yards of offense. That said, BC’s typically porous defense stitched together its most impressive half of football this season in the opening 30 minutes, holding the Irish to three field goals en route to 16 points. Things unraveled in the latter portion of play, though, as the Eagles’ offense couldn’t seem to stay on the field, mustering a mere 64 yards in the second half.

In two games against ranked opponents this year, BC has been outscored by then-No. 4 Clemson and Notre Dame by a combined 99-14. Both of those blowouts saw the Eagles’ offense—a unit that is currently averaging 31.4 points and 457.1 yards per game—score just two touchdowns and compile a total of 368 yards. Addazio is now 1-17 against ranked opponents during his BC tenure, and since the start of the 2016 campaign, the Eagles’ average margin of defeat against those teams is 30 points.

Entering Week 14, which will be BC’s fourth game away from Alumni Stadium in the past six weeks, Addazio finds himself in a similar situation as 2016. As was the case three years ago, BC is 5-6, on the road, and with its back up against the wall—it’s win or go home.

Pittsburgh enters as a 9.5-point favorite after suffering a 28-0 shutout loss at now-No. 23 Virginia Tech. Longtime defensive coordinator Bud Foster and the Hokies defense bottled up the Panthers’ rushing attack and limited quarterback Kenny Pickett to just 117 yards through the air. The strength of Pittsburgh isn’t its offense, though—it’s the team’s top-10 defense. The Panthers have allowed a measly 294.8 yards per game, good for ninth best in the country. Even without defensive end Rashad Weaver, who suffered a season-ending ACL tear this summer, Pittsburgh ranks first in the nation in sacks with 48.

“They have a pretty exotic third-down blitz package,” Addazio said. “So they get a lot of guys cut free on people’s offensive line, if you will, or front. They bring a lot of different blitzes. They can pick them up. I think they have some talented defensive ends. I think they do a good job with their scheme. That’s shown up. It’s on the tape.”

Although BC is ranked fourth in sacks allowed (10) this year, the Panthers could very well have their way with the Eagles’ vaunted offensive line, especially if BC can’t get the running game going. Six of the 10 sacks that BC has given up this season have come against Clemson and Notre Dame, both of which kept the Eagles under 130 yards rushing. Last week alone, the Irish got to quarterback Dennis Grosel four times, forcing a pair of fumbles. But Addazio, who notably shaved his mustache after this weekend’s loss, has moved past the 33-point drubbing in South Bend—his eyes are on Pittsburgh.

“There were plenty of good things to take away from last week, and of course there’s plenty of things you need to work on, simple as that,” he said. “That’s our goal this week right now as we get ready for Pitt is to continue to grow and develop and put a good plan in place.”

The problem is Pittsburgh is one of the hardest opponents to plan for in college football. The reigning Coastal Division champions have been one of the most up-and-down teams in the ACC—and the entire country, for that matter—during head coach Pat Narduzzi’s five-year stay. The Panthers upset No. 3 Clemson in 2016 and No. 2 Miami in 2017, in addition to rattling off a four-game win streak to book their ticket to last year’s ACC Championship. And this year, they went toe-to-toe with then-No. 13 Penn State in Happy Valley before defeating then-No. 15 Central Florida, which had won 28 of its previous 29 games.

But factor in last year’s 1-3 non-conference record, near losses to Youngstown State (2017) and Delaware (2019), last Saturday’s blanking, and an 0-3 bowl record under Narduzzi, and you have quite the roller coaster of a program. Anything could happen on Saturday, and perhaps that’s the entropy that Addazio and the Eagles need to become bowl eligible in 2019.