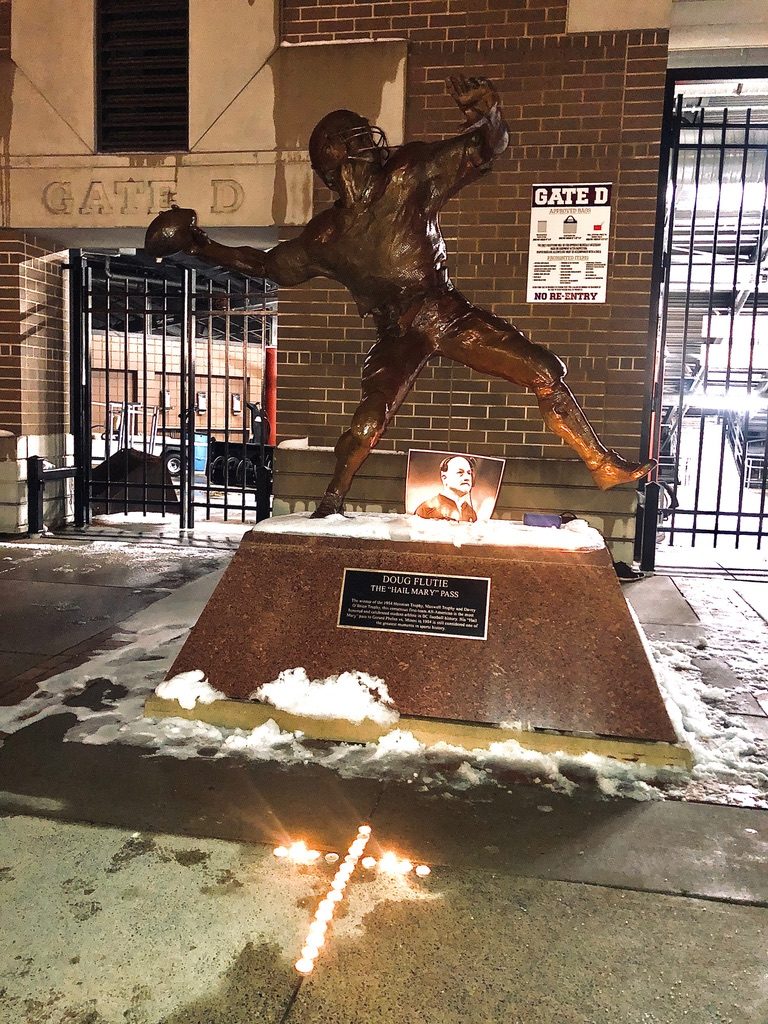 The New England Classic, Boston College’s resident satirical newspaper, paid its respects to former head football coach Steve Addazio with a candle-lit vigil outside Alumni Stadium on Wednesday night. Addazio, whose termination was announced on Sunday, is notably still alive, but the end of his tenure was mourned through a poignant eulogy and evocative musical tributes.

Joey Reda, a staff writer for The Classic and CSOM ’21, delivered a brief eulogy in front of the Doug Flutie statue, which hosted a shrine adorned with candles and a black-and-white photo of Addazio. Prior to his remarks, Reda saluted the shrine to the former football coach.

“We are gathered here today to celebrate the life of just a guy being a dude—Boston College head football coach Steve Addazio,” Reda said.

Addazio garnered internet fame in a Vine that went viral in June 2013. Against the backdrop of football practice at Alumni, Addazio remarked, “What’s better than this—guys bein’ dudes?” To date, the Vine has over 31.5 million loops on the once-popular platform, which was shut down in 2016. Addazio responded to his instant fame with a string of BC football-themed Vines, including one that featured Addazio quoting lyrics from “Stuck In The Middle With You.”

For the eulogy, Reda pulled heavily from Addazio’s Vine career, as well as quotes from press conferences Addazio held during his time at BC.

“Although things never came together, it was still beautiful,” Reda said at the vigil on Wednesday.

Addazio ended his tenure with a 44-44 record and led BC to bowl games in six of his seven seasons with the team.

Following the eulogy, Reda led the crowd of roughly 20 mourners in singing “Amazing Grace.” Once Whitney Houston’s iconic “I Will Always Love You” began to play, Reda kneeled in front of the candles at the foot of the statue, which were arranged in a cross formation, to pay his respects.

When the candle flames blew out, MaryElizabeth Mooney, editor-in-chief of The Classic and MCAS ’20, attempted to light the picture of Addazio on fire, but the paper would not catch. The melting snow on the statue appeared to moisten the picture, making it difficult to burn. Mooney responded by tearing the picture in half and letting the pieces fall to the ground.

The Classic’s vigil builds on a string of public events the historically elusive student publication has held in the past year. Although The Classic still publishes its satire without bylines, members of the paper gave speeches at NECTalks, a parody of TEDTalks, in March, and protested to abolish UGBC in May.

Despite the abrupt end to Addazio’s BC career, Reda offered some hope for the former coach’s future.

“I take great solace in the fact that Steve will go onto a better place—probably as an assistant coach at Clemson or Ohio State, where he’ll have plenty of room to run right up the middle, over and over and over again,” Reda said.

Correction (12/5/19, 4:45 p.m.): The Meatball Obsession vigil was not hosted by the New England Classic, as originally reported.

Turnovers Plague Eagles in Narrow Loss to Northwestern
The Sound from Down Under: Isobel Knight is on a Roll