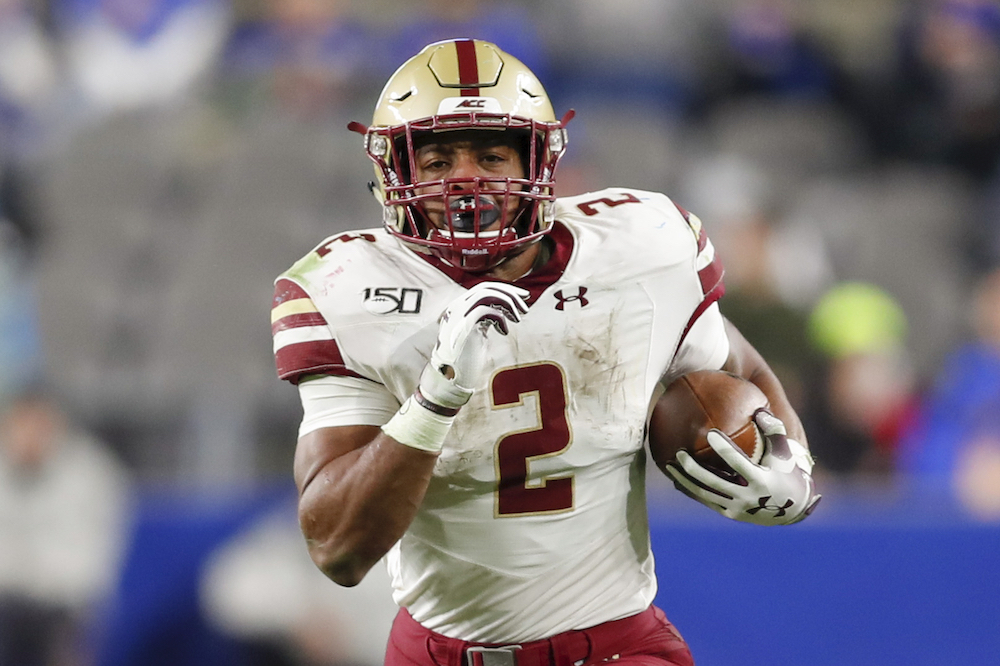 After leading the nation in carries and setting Boston College football program records in both career rushing yards (4,382) and touchdowns (38), junior running back AJ Dillon has elected to enter the 2020 NFL Draft in lieu of returning to the Heights for his senior year, he told Yahoo Sports on Tuesday.

“At this point in my career, I’ve done everything I set out to do,” Dillon told Yahoo Sports writer Pete Thamel. “I had a chance after the Pitt game to talk with my family. We came to the conclusion, it’s time to take the next step.”

Dillon will not participate in the Birmingham Bowl against No. 21 Cincinnati on Jan. 2. Instead, he’ll sit out—as many NFL prospects do in an effort to both avoid a potential injury and to begin preparing for the draft process.

The junior wrapped up his highly successful career with the Eagles against Pittsburgh on Nov. 30 in what was a performance for the ages. Dillon took 32 carries for 178 yards and a touchdown, icing the 26-19 win with eight straight carries on the final drive.

The impact Dillon had on the program can’t be understated. A three-time All-ACC First Team selection, Dillon arrived on the Heights after turning down the likes of Michigan and eventually beat out Jonathan Hilliman as the starting running back en route to a breakout freshman season. He finished 2017 with 1,589 rushing yards, 14 touchdowns, and a host of jaw-dropping plays. His stiff arm of a Louisville defender en route to what was a 272-yard, four-touchdown day kickstarted his run to ACC Rookie of the Year.

As a sophomore, Dillon dealt with injuries but still turned in 1,108 yards in 10 games and again totaled double-digit touchdowns (11). This past year, Dillon and teammate David Bailey formed a running back tandem that few in the country could compare to, and Dillon piled up career highs in carries, total touchdowns, and rushing yards. Dillon was also remarkably able to finish just 227 yards shy of the ACC record for total rushing yards despite playing only 35 career games.

“Ever since I was a kid playing Pop Warner, it was always my dream to play in the National Football League,” Dillon said in a statement released by BC Athletics. “To have this opportunity now to go chase a childhood dream is all I could ever ask for. I can’t thank my coaches, teammates and family enough for all of their love and support throughout my time at Boston College. The BC community welcomed me with open arms when I committed and I will always be proud to call myself a BC Eagle.”

Dillon’s announcement doesn’t come as much of a surprise, though, as he has rewritten the record books, and his stock is arguably the highest it could be. Going through the grind of another college season would increase his risk of injury, and the program is at a turning point with a new coach coming in.