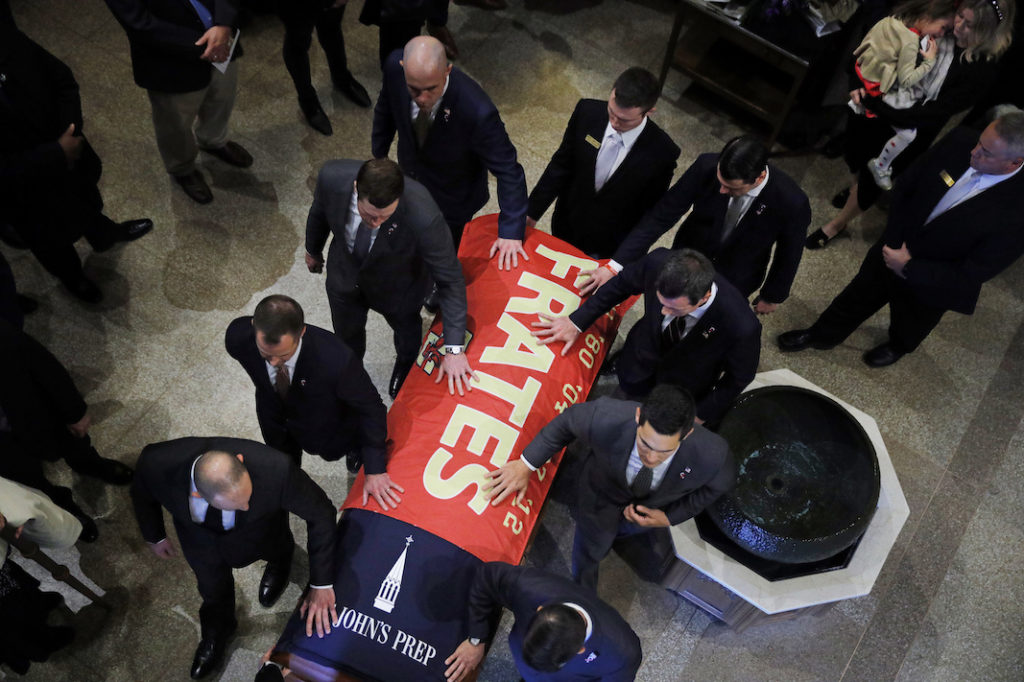 Family and friends of Pete Frates, BC ’07, in addition to numerous other members of the Boston College community, gathered in St. Ignatius Church on Friday morning to celebrate Frates’ funeral Mass. Frates, a former baseball player at BC and the face of the ALS Ice Bucket Challenge, died Monday after a seven-year battle with ALS. Frates leaves behind his wife, Julie, and his 5-year-old daughter, Lucy, in addition to his mother, Nancy; father, John; brother, Andrew; and sister, Jennifer.

With current BC baseball players, head coach Mike Gambino, and former teammates and friends from all across the country in attendance, the crowd paid tribute to a man whose charisma and infectious energy made a lasting impact on the lives of those around him, as reflected in the words of all those who spoke during and after the service.

“We’re going to grieve for just a very brief period longer, and then we’re going to celebrate his life forever,” said Frates’ father, John, during his eulogy.

Frates was diagnosed with amyotrophic lateral sclerosis (ALS), the neurodegenerative condition commonly known as Lou Gehrig’s disease, in 2012. In 2014, Frates became one of the driving forces behind the ALS Ice Bucket challenge, a viral social media campaign to raise awareness for the disease that raised over $220 million in search of a cure.

Rev. Tony Penna, S.J., BC’s associate vice president and director of Campus Ministry, paid tribute to Frates during the service. Recounting one of the last moments Penna and Frates spent together, Penna spoke about Frates having an outsize presence despite having lost most of his muscle and mobility.

“When he was looking at me, I was praying for him, I got the strange feeling he was thinking, ‘You’re the one who needs the prayers. I’ve made an impact on this world. I’ve lived a good life,’” Penna said. “Like Mother Theresa he was full, and when I put my hand down to bless him, I kid you not, about two feet off his chest, I felt him, because he was that big.”

Penna continued speaking about the impact Frates had on those around him, reflecting on what the world would be like if everyone had the passion and dedication to do good as Frates did.

John Frates shared several stories about the way Pete showed he was dedicated to the service of others through his everyday actions, such as the time he spent six hours out in a winter storm plowing the streets and helping neighbors free their cars, only returning home because he ran out of fuel.

“I can attest that one’s life flashes before you during the passing because Pete’s life has been flashing before my eyes,” John said. “I could’ve stopped this movie at any point in time, from his childhood, through his high school, through his college, and beyond, and picked a poignant, impactful story.”

John made three requests of the audience: that they stick with the Frates family and its mission to defeat ALS, that they love and support Frates’ wife and daughter, and that they celebrate Frates’ life instead of grieving over his death.

John then shared one of Frates’ favorite affirmations, which was printed on the back of the service program.

“Be passionate, be genuine, be hardworking, and don’t ever be afraid to be great,” he said. “That’s Pete right there.”

After the Mass, current BC baseball players and former teammates of Frates spoke to the media about their relationships with Frates.

“I didn’t really meet Pete until later on in his life,” said sophomore Sal Frelick. “I’m currently on the baseball team now, and Pete’s such an inspiration to all of us. There’s nothing like a baseball game where Pete could come out and get down to the field. … We were so happy that Pete could come out to see us. Just him being there as an absolute presence.

Chris Shaw, a former BC baseball player who now plays for the San Francisco Giants, said that Frates—who Shaw first met when he was 13 years old—had served as mentor for him.

“You met Pete, you wanted to be Pete,” he said. “It was simple as that. Just charismatic walking into the room. He did everything that I wanted to be growing up.

“You look around, you look at this outpouring right now. I mean, I got six guys sleeping on my couch right now. They flew in from across the country just because they had to come and honor him. It’s in all of us, Pete’s spirit, Pete’s lasting impact, and just who he was as a person—and that’s gonna live on forever.”

Gambino, current head coach of BC baseball, talked about the lasting change Frates has made in the world. Gambino was the assistant coach during Frates’ freshman year, but he said they remained in contact afterward.

Despite the somber occasion, the service was a celebration. It reflected, in John’s words, the old adage “There’s no crying in baseball.”

“There’s no wallowing in ALS,” said John. “So when we walk out of this beautiful, magnificent church after the ceremony is over, we’re done with grieving. We’re done. All we’re doing is celebrating Pete Frates for the magnificent human he was.”

Video coverage of Frates’ memorial Mass can be found here.

Frates’ family members request that their privacy be respected and ask for donations to be made to the Peter Frates Family Foundation at 21 Landers Drive, Beverly, MA 01915, or online at petefrates.com/donate. 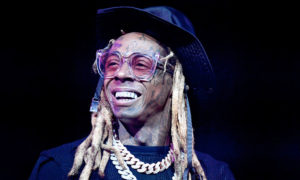