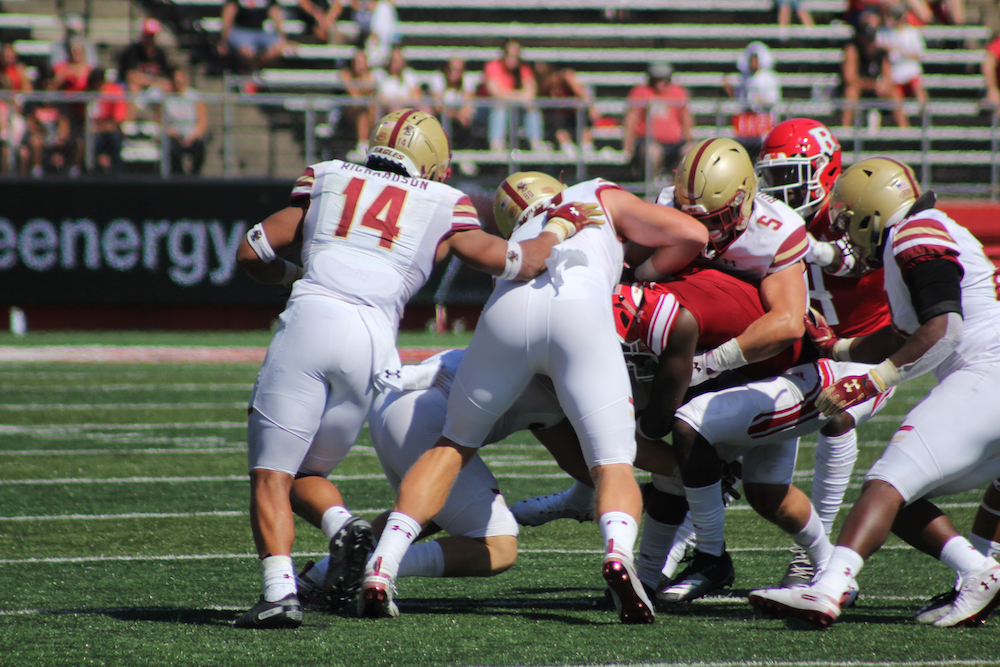 For a moment, it appeared as if Max Richardson’s Boston College football career would end with him on the sidelines watching his Eagles suffer their largest bowl defeat since 1999. The All-ACC Second Team linebacker missed out on postseason play with a hamstring injury, cutting a breakthrough campaign one game short. But Richardson—the leading tackler of a historically bad BC defense—isn’t going out on that note.

The Duluth, Ga. native announced on Thursday that he will not enter the NFL Draft and instead will use his fifth and final year of eligibility to return for the 2020 season.

“The ups and downs, I’ve had an unbelievable time playing football in Alumni Stadium,” Richardson said in a team video posted on Twitter. “I’ve made some of the best relationships that I’m ever going to have for the rest of my life. And I thank God every day for the opportunity to play the game. However, my time here at BC is not done yet, and the best has yet to come.”

Richardson recorded 72 solo tackles this past season, the eighth most in the country. His 107 tackles were not only the most on the team, but they were also tied with Ty Schwab (2017) for the most by an Eagle since Steele Devitto racked up 112 in 2013. Richardson also tallied the most tackles for loss (14.5) and sacks (3.5) of any BC player this year. To put that in perspective, no other Eagle logged more than 7.5 tackles for loss or 2.5 sacks.

Because Isaiah McDuffie—who notched 85 tackles as a sophomore in 2018—was sidelined for most of the season while recovering from offseason knee surgery, Richardson was the go-to linebacker for defensive coordinator Bill Sheridan. The redshirt junior lived up to the task, building on his 72-tackle campaign from the previous year.

Richardson finished five of BC’s first seven games of the season with 10 or more tackles, at one point reaching that mark in four consecutive outings. Between Weeks 4 through 6, the defensive stalwart amassed a total of 41 tackles, 29 of which were solos and 5.5 of which were behind the line of scrimmage. He made a few eye-catching shoestring tackles at Rutgers, set the tone against Wake Forest with an early-game sack, and did his best to round up Louisville’s playmakers in what was a field day for the Cardinals’ offense.

Toward the end of the year, Richardson’s game-to-game numbers slightly dipped, but he remained the focal point of the Eagles’ defense. Whether it was forcing a Tommy Devito fumble to allow BC to cap off a 34-point second quarter in the Carrier Dome or simply applying pressure up the middle at Pittsburgh to help the Eagles come up with a season-high four sacks, the soft-spoken linebacker was there to make a play.

Richardson, along with fellow linebacker John Lamot, were a few of the lone bright spots on an Eagles defense that ranked 125th in total defense (478.7 yards per game), reset the single-game program record for yards allowed twice, and gave up 32.2 points per contest—the most in single-season BC history.

With the firing of Steve Addazio and substantial staff turnover following the hiring of head coach Jeff Hafley, BC has lost some of its most highly regarded offensive weapons. Running back AJ Dillon declared for the NFL Draft. And, of course, three-year starting quarterback Anthony Brown and his top wideout, Kobay White, entered the transfer portal. Yet, with Richardson’s decision to return, the Eagles are keeping their most heralded defensive player.

In his final year on the Heights, the linebacker has a shot to climb the record books, turn scouts’ heads, and pilot Hafley’s highly anticipated defense, a unit that will surely be expected to put 2019 in the rear view mirror.