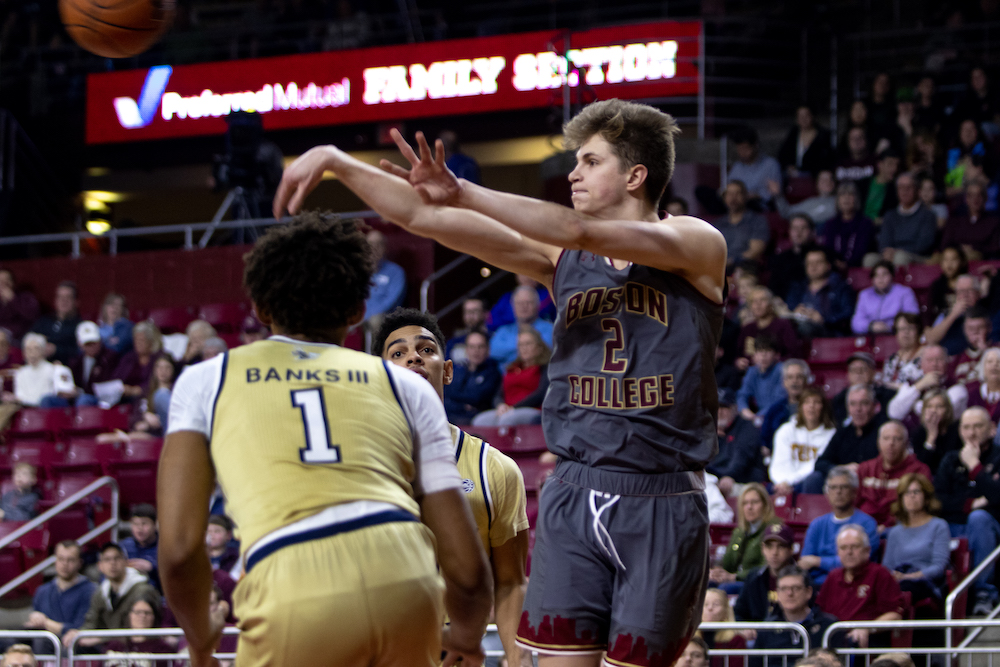 There were eight minutes and 58 seconds remaining in the first half of Sunday’s game in Winston-Salem, N.C. when Boston College men’s basketball forward Kamari Williams stepped into a 3-pointer. The shot sunk, and the Eagles galloped back to the defensive end of the court with center Luka Kraljevic raising his arm signaling the three-finger 3-point celebration. Williams’ basket, however, came as more of a relief than anything.

After all, it was the Eagles’ first 3-pointer of the night. Four days removed from starting 0-of-18 from behind the arc at Syracuse, BC kicked off its second straight road game by missing nine consecutive long-range attempts. Williams’ bucket hardly changed the narrative, as the Eagles finished the half just 2-of-16 from deep and ended the day having converted a mere six of their 29 shots from 3-point territory. Factor in Wednesday’s 6-of-30 performance, and BC rounded out the week 12-of-59 from downtown, a 20.3 percent mark.

Granted, Steffon Mitchell (flu), Jared Hamilton (ankle), and Julian Rishwain (leg) all missed Sunday’s game—and Nik Popovic (back) has sat out the last nine contests—but regardless of who’s in the rotation, sixth-year head coach Jim Christian has a pretty big problem on his hands. The Eagles (9-9, 3-4 Atlantic Coast) have attempted the sixth-most 3-pointers in the ACC and are only making 28.6 percent of them—the second-lowest percentage in the conference and the 24th-lowest clip in the nation (329th out of 353 teams).

BC doesn’t have a single player shooting above 35.5 percent from deep. But it does have four guys who are averaging 3.4 or more 3-point attempts per game, including two who are netting well under 30 percent of their long-range shots.

Jairus Hamilton is perhaps the most intriguing example. The sophomore forward, who stands 6-foot-8 and came in as a four-star recruit with impressive post skills, jacks up 4.2 triples per contest, the second most on the team. On average, only 1.1, or 26 percent, of those are falling. Meanwhile, he’s shooting a practically identical number of 2-point shots (4.3) per game yet converting at a 50 percent clip on those attempts.

Derryck Thornton has also made a home for himself behind the 3-point line, despite minimal success. Following a 4-of-8 start from deep, the grad transfer has shot just 10-of-53 (18.9 percent) from 3-point land. What’s more, since making multiple 3-pointers in each of his first two games, Thornton has only accomplished that feat on one other occasion—a 2-of-7 outing against Central Connecticut State on Dec. 15. To put that in perspective, the Blue Devils have the 28th-worst 3-point defense in the country.

BC has made at least 10 treys in just three of its 18 games this season. The Eagles have fared even worse from beyond the arc in conference play. In fact, BC is shooting 25.5 percent from behind the 3-point line against conference opponents, the second-lowest clip of all 15 ACC teams.

Christian’s crew is pushing the ball in transition just as it has the past few years, but only now it doesn’t have the shooters to stockpile points. Without a Ky Bowman, Jerome Robinson, or Jordan Chatman, the Eagles don’t have a reliable 3-point marksman. While Jay Heath has caught fire at times, he’s also had four games this season where he’s attempted at least five triples but only made, at most, one.

BC is currently on pace to finish the year below 30 percent from deep for the first time during Christian’s tenure. Just two years ago, the Eagles ranked the upper third of the nation in 3-point shooting (35.9 percent), and the season before that, they were 66th in the country in that department (37.4 percent).

Unlike seasons past, BC has struggled to stitch together momentous runs, and it even has endured a number of scoring droughts—most recently a pair of four-plus minute dry spells against Wake Forest on Sunday. Inconsistent 3-point shooting has undoubtedly played a role in that development, and it has lowered the Eagles’ field goal percentage to 39.7 percent in the process.

Often, BC has been given space to shoot from distance. That was more evident than ever against Jim Boeheim’s vaunted 2-3 zone on Wednesday. With two defenders up front and three in the back, the Orange collapsed the lane and offered BC the opportunity to swing the ball around the perimeter and launch 3-pointer after 3-pointer. Rather than working the ball inside, the Eagles—who actually made 45.2 percent of their 2-point attempts in the 26-point loss—stuck with the three ball.

Here, Thornton dribbles along the baseline before firing a pass to Heath, who then whips the ball to Jairus Hamilton at the top of the arc. Hamilton had an open shot, but with 12 seconds left on the shot clock, he might have been better off dishing the ball to Felder. At the ACC logo—often the key point for cracking a zone—the freshman forward would’ve been able to either continue inside or find an open teammate for a higher-percentage shot.

When a team is shooting 28.6 percent from downtown, these kinds of open looks from 3-point range are all but guaranteed. For BC, its fate will likely be decided by how it picks its spots behind the 3-point line and if it can find a way to create more offense inside the arc, particularly in the half-court set. Without Popovic, the heart and soul of BC’s pick-and-roll game and primary interior presence, that’s easier said than done.

But the fact of the matter remains that the Eagles are 2-4 in games this season where they have logged more than 25 attempts from deep. And three of BC’s next five opponents rank inside the top 100 in 3-point defense.

Christian and his team will be tested to find other ways of scoring the basketball at a pivotal point in the season, when the Eagles’ 3-1 start to ACC play is becoming an increasingly distant memory.