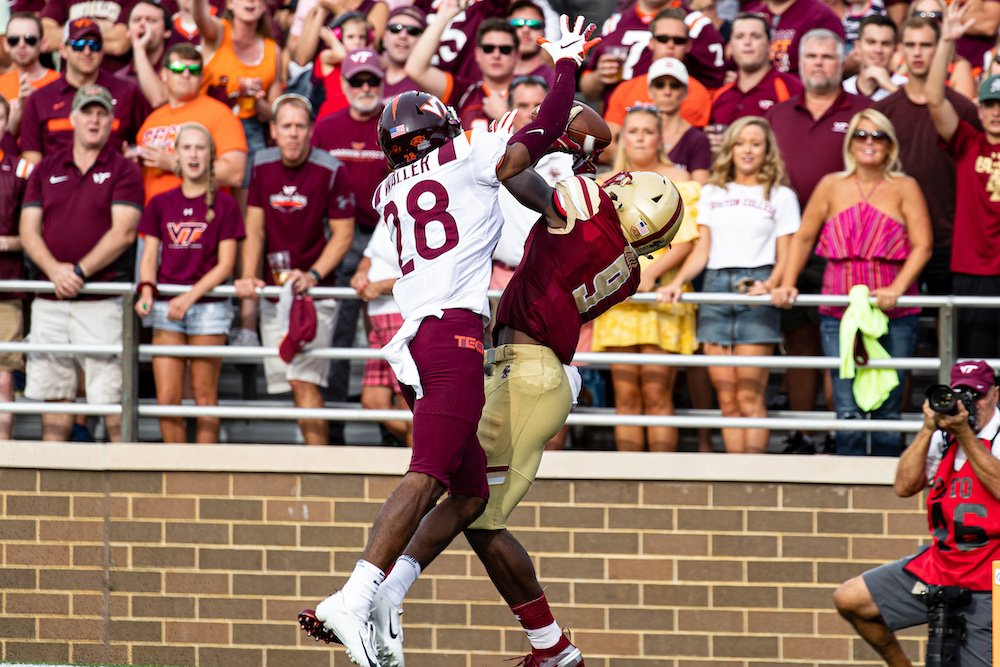 Boston College football wide receiver Kobay White was in the transfer portal for 18 days. During that span, tight end Hunter Long announced his return, as did linebacker Max Richardson, who could have entered the 2020 NFL Draft.

On Wednesday evening, White, too, decided to come back for the start of the Jeff Hafley era. The wideout removed his name from the transfer portal and will play for BC once again in 2020.

Anthony Brown—White’s quarterback the past three years—is still in the transfer portal.

White led the Eagles with 29 receptions and five receiving touchdowns in 2019. He also recorded 460 receiving yards, as well 19 rushing yards on four carries.

During BC’s season-opening win over Virginia Tech, the redshirt junior hauled in a 56-yard reception and a 17-yard back shoulder fade touchdown. When Florida State visited for a Week 11 matchup, White caught five balls for 65 yards and two scores in the loss to the Seminoles. Highlighted by his 64-yard touchdown reception at Syracuse and 39-yard diving catch in South Bend, the Harrisburg, Pa. native served as the Eagles’ primary downfield target in 2019.

As a redshirt sophomore, the 6-foot-1 wide receiver reeled in a team-best 33 catches for three touchdowns and 526 yards. In the process, he became the first BC wide receiver to rack up more than 500 receiving yards in a single season since Alex Amidon in 2013. White posted a pair of 100-yard games in 2018, including a seven-reception, 121-yard effort at FSU. When all was said and done, he totaled at least four catches in four of the Eagles’ 12 games that season.

Although White only started four games as a redshirt freshman, he appeared in all 13 contests and ended up with a career-high 34 receptions for 423 yards and two scores. All but six of White’s catches during the 2017 season came from passes thrown by his classmate Anthony Brown—who started the first 10 games before suffering the first ACL tear of his BC career. While White didn’t find the end zone until late October, he recorded receiving touchdowns in back-to-back weeks while the Eagles were stringing together their season-defining three-game ACC win streak.

White ranks 19th in career receiving yards with 1,409 and has 96 receptions to his name.

Along with their new head coach and a new offensive coordinator, the Eagles will go into the offseason knowing that they have their top three receivers from this past year on board for the 2020 campaign.