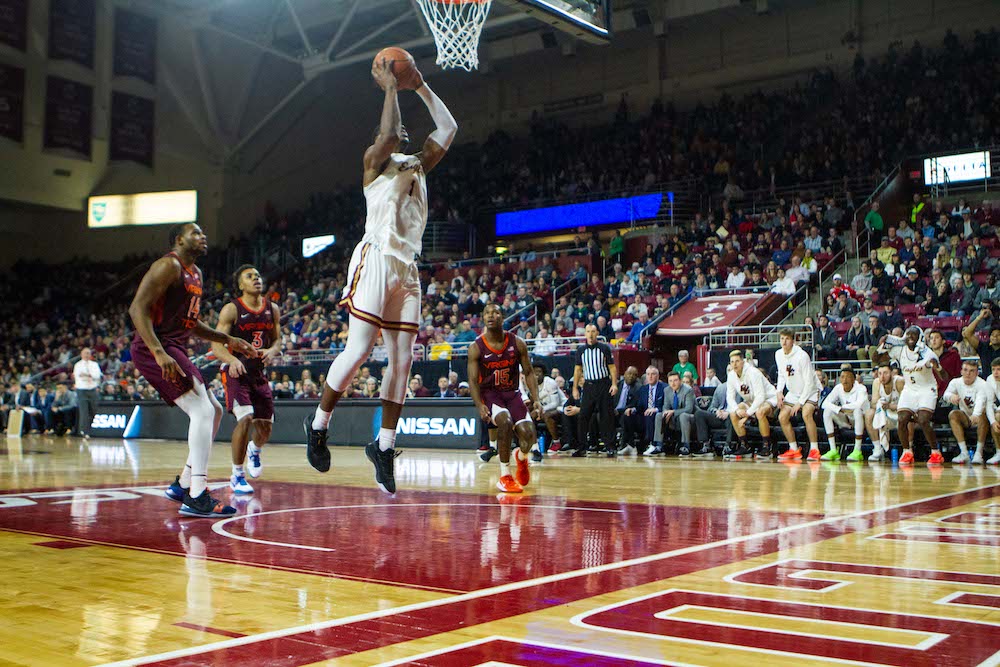 It was a packed house in Conte Forum for men’s basketball’s Alumni Day and the retirement of Troy Bell’s jersey. There was also a game to be played, however, and it turned out to be one of the most thrilling contests of the season. Boston College (10-10, 4-5 Atlantic Coast) took down Virginia Tech (14-6, 5-4) 61-56 in a defensive showdown.

Although the Eagles trailed for most of the game, momentum constantly shifted between sides, as the teams traded offensive bursts. As a result, it was as loud as it’s been for the basketball team in Conte Forum all season. In a game defined by defensive effort and Jairus Hamilton threes, BC was able to snap a four-game losing skid against a formidable opponent in Virginia Tech.

Here are some takeaways from the matchup:

The game could have been over shortly after it started for the Eagles, but you would not know that by looking at the first-half box score. The Eagles jumped out to a 10-5 lead to start the game, but things took a turn after the first media timeout. Virginia Tech came out firing after the break, making four consecutive 3-pointers. Combine that with six straight possessions ending in a missed shot or a turnover, and it was not looking good for the home team. The Hokies made a 14-0 run and held BC without a point for over six minutes.

But the tides started to turn toward the end of the half as the Eagles turned up their defensive intensity. Efficient shooting from Jay Heath and Jairus Hamilton propelled the Eagles back into the game as Virginia Tech embarked on an offensive lull of its own. After a slow start, BC found itself down just five at the break. The Hokies shot 44 percent from the field compared to BC’s 41, and the turnover battle was even at eight apiece after 20 minutes of play.

It seemed as though Hamilton could not miss from outside in this one. He led the charge on offense with a career-high 23 points on an efficient 7-11 from the field. Just one of those came from inside the paint. Hamilton also shot a career-best 5-7 from beyond the arc, with two key buckets coming down the stretch for the Eagles. BC hadn’t led since the aforementioned 10-5 lead with 15:31 remaining in the first period, but Hamilton’s two free throws put the Eagles ahead with 4:17 to go. With less than two minutes remaining, Hamilton knocked down a clutch three to extend BC’s lead to four.

When asked about his hot hand, the sophomore preached confidence.

“I just got out there and knocked down a couple and felt really good after that,” Hamilton explained. “I feel like I’m really starting to come into my own.”

The Eagles and their fans certainly hope that is the case. The 6-foot-8 sophomore has been more commonly known for his inside game and athletic ability, but the continuing development of his shooting range will make him exponentially tougher to guard. An increase in Hamilton’s consistency from the outside could be key to BC’s success.

Outside of the slow start, the Eagles played relentlessly on the defensive end to limit one of the better offensive teams in the ACC to just 56 points, Virginia Tech’s second-lowest scoring total this season. Averaging 72.2 points per game and shooting 37.4 percent from deep as a team, head coach Jim Christian’s game plan was to keep the Hokies’ shooters in check.

“They’re such an elite 3-point shooting team, we tried to switch as much as we can to make them score on the interior, especially posting up,” Christian said.

The Eagles executed that plan well, as the Hokies shot just 33 percent from beyond the arc and 40 percent from the field overall, their second-worst shooting performance of the season.

BC was also able to win the turnover battle against a team known for its ball security, as Virginia Tech is second in nation with a 1.67 assist-to-turnover ratio. The Eagles forced 14 turnovers, continuing to prove that they are one of the best in the conference in that aspect (third in the ACC with 16.3 forced turnovers per game).

Senior Nik Popovic saw limited action in his second game since returning from a back injury. After playing 30 minutes just three days earlier, Saturday could have been a day of rest for him.  It may not have been the best idea to insert Popovic into a game in a game that necessitated a lot of off-ball movement and quickness on the defensive side. His spot in the rotation was filled by the more athletic forward C.J. Felder, who logged four points in 22 minutes of action.

BC Has a Day to Forget at the Free Throw Line

It’s not often that the fans are holding their breath on every free-throw attempt, but such was the case on Saturday. Coming into the game, the Eagles were 6-1 when attempting 20 or more free throws. They extended that record to 7-1 with 27 attempts, but it was far from easy. The Eagles shot 41 percent from the line, their second-worst mark of the season. It probably would’ve been a completely different ballgame down the stretch had the Eagles converted at least half of those attempts.

In the last minute of play, when it had become a game of free throws, the tension was palpable in Conte Forum. Nevertheless, the Eagles made them when they really counted, as Jairus Hamilton knocked down both of his shots to ice the game at 61-56.

BC will enjoy this one, but a tough stretch awaits them. As Christian has said, “the ACC challenges you more mentally than physically,” and the Eagles will need to be ready in both aspects in order to endure their upcoming stretch of play.