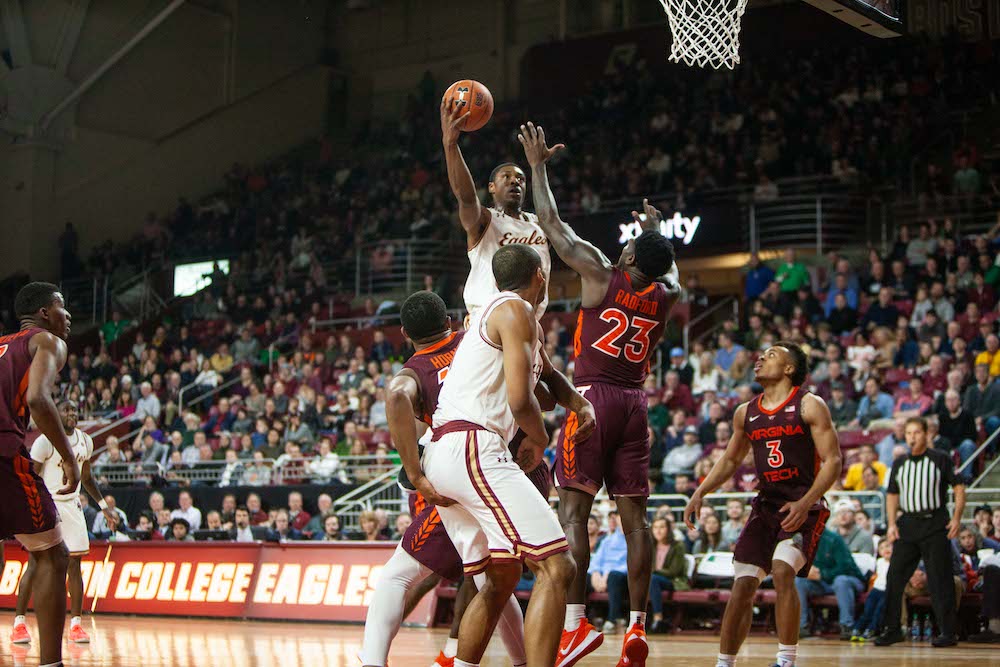 With seven minutes to play in the first half, Saturday’s game seemed to be getting quickly out of hand for the Eagles. Boston College started the game up 5-0, but Virginia Tech stormed back to claim a commanding 22-12 lead through the strength of its outside shooting. The Hokies made more 3-pointers than all but two teams in the nation so far this season—and the Eagles, unable to keep up with Virginia Tech’s speedy guards, seemed poised to be the next victim of the Hokies’ long-range prowess.

The rest of the game told a very different story, as the Eagles (10-10, 4-5 Atlantic Coast) flipped the script in the second half to edge out a 61-56 victory over Virginia Tech (14-6, 5-4). The gritty, come-from-behind performance ended BC’s four-game losing streak.

The Eagles put together an incredible defensive performance, flying at open Hokies shooters and blocking off passing lanes. Prior to this matchup, Virginia Tech turned the ball over an average of 9.5 times per game—a mark that ranked best in the country—but BC pressured them into coughing up the ball 14 times.

“I told our team after the game, ‘There’s a lot of ways to win,’” said Christian. “You can win on defense and I thought we won the game on defense today.”

BC’s comeback began in the final stages of the first half. Virginia Tech’s early offensive success vanished as the Eagles began to click defensively, and the Hokies could hardly get a pass off without finding an Eagle’s hand in the way. Both Jay Heath and Jairus Hamilton hit 3-pointers, and the game went into the half with Virginia Tech’s lead cut to five, at 31-26.

The Eagles picked up just where they left off in the second half. Heath muscled to the basket for a tough shot over Hokies star forward Landers Nolley II to cut the deficit to one, flexing toward the bench as a nearly sold-out Conte Forum exploded with cheers.

Virginia Tech was able to maintain a slim lead until the 4:17 mark, when Jairus Hamilton hit a pair of free throws after being fouled on a fadeaway attempt off one leg. The two teams traded blows back and forth for the next several minutes until Hamilton sealed the game by hitting a pair of free throws with just 13 seconds to play.

The Hamilton brothers were the story of the night for the Eagles, with Jairus putting up a career-high 23 points on a clean 7-11 shooting. Jared only had six points, but his three buckets came at critical moments down the stretch, including a beautiful pull-up baseline jumper after a pump fake sent a VT defender flying.

“I feel like I’ve really started to come into my own, figuring out the pace of the game, how to control my body more,” said Jairus Hamilton following the Eagles’ win.

Nolley led the Hokies with 15 points off an incredible 36 percent usage rate, and Wabissa Bede and Nahiem Alleyne scored nine and 10 points respectively.

The only drawbacks of the night for the Eagles were the struggles of center Nik Popovic. After returning from injury to play against Pitt, Popovic came off the bench but still played 30 minutes and collected 12 points.

He seemed poised to play a large role against Virginia Tech as well, replacing Jairus Hamilton with 14:35 left in the first half. But the center was unable to get anything going, ending the game with three turnovers and just two points. He was doubled nearly every time he got the ball and never looked comfortable with his post moves.

Chris Herren Jr. put together a gutsy performance off the bench. Although he only scored once, his aggressive offensive play created open looks for his teammates, and he guarded Nolley effectively despite the huge size discrepancy between the two players.

While they will need more from Popovic going forward, the Eagles’ defensive success bodes well as they enter a tough stretch of the schedule that includes games against No. 6 Louisville, UNC, and No. 8 Duke.