Home » Lewis Delves into the Dark Humor of Boston Literature 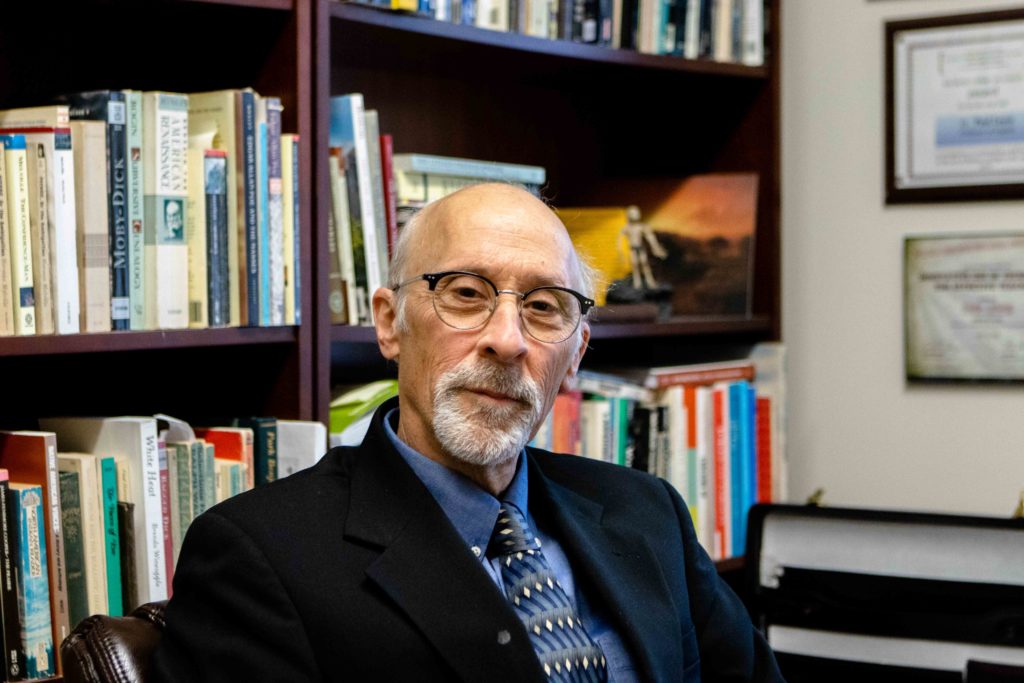 Lewis Delves into the Dark Humor of Boston Literature

Sylvia Plath, Robert Frost, Henry David Thoreau. Boston’s snaking streets are riddled with the pasts of literary powerhouses. In their own time, each has given the city of Boston more depth, capturing a glimpse of its history. Born in Boston, Edgar Allen Poe’s dark, gothic words have captured the eyes of many—including Boston College’s professor Paul Lewis.

Lewis’ admiration of gothic literature started at a young age. Lewis grew up in the bustling borough of Manhattan, where his interests—in particular, studying Edgar Allan Poe—began to blossom. He said that his first exposure to Poe began when he was assigned to read The Tell-Tale Heart.

“As a teenager, I always had an interest in horror movies and gothic stories,” Lewis said. “I ran into Poe pretty early on, in what used to be called junior high, and just got fascinated with the dark side of literature.”

Lewis is known for his interest in gothic literature and humor, American literary history, and Edgar Allan Poe—as well as the interaction between those subjects and Boston’s history. Lewis has served as president of the Poe Studies Association, and his interdisciplinary study of humor is particularly relevant in today’s politically charged climate.

“The work I did in grad school and the first three years at BC was very much [about] Poe’s place in the development of an evolving genre of gothic fiction—how he modified and adapted gothic formulas for future writers,” Lewis said.

After looking at Poe’s writing through a lens focused mainly on the horror and fear factor of his stories, Lewis began to notice the satirical and dark humor intertwined with the thrilling plots. This discovery piqued his interest, leading him down a completely new branch of literature and language.

“I started to get interested in writing about that and why Poe, in particular, would have gone for this overlapping of humor and fear so much,” Lewis said. “That led me into thinking about how literary critics understand humor and how it functions in literature.”

In 1989, Lewis published a book about his newfound area of curiosity called Comic Effects: Interdisciplinary Approaches to Humor in Literature. He focused on the study of humor, how it offers insight into a writer’s character, and how comedic professionals and authors using humor have more in common than generally perceived.

Through analyzing the relationship of humor and fear in gothic literature, Lewis was propelled into another section of interest. He examined humor’s role in American political culture from 1980, at the election of Ronald Reagan, to 2005, when George Bush was still in office.

Driven by this newfound interest, Lewis published his second book in October of 2006. Cracking Up: American Humor in a Time of Conflict sheds light on humor’s role in dealing with current issues. Staying in line with a gothic theme, Lewis addressed how humor is used to make light of massive problems and how it has transformed the way people view dilemmas. Lewis said that people tend to talk rather than actually taking action—which was exemplified by political parodies produced during the 2008 presidential race.

Lewis’ fascination with humor also translated to his teaching. He began teaching courses, such as “Writing Workshop: Creative Nonfiction,” that helped students understand humor then incorporate it into their own writing.

“I think that my research and my teaching have always gone hand in hand,” Lewis said.

Around the 200th anniversary of Poe’s birth in 2009, Lewis began to transition from a study of dark humor to an interest in the literary history of the City of Boston. Poe was born in Boston, so Lewis began working to emphasize the writer’s connection with the city.

As the chair of the Edgar Allan Poe Foundation of Boston, Lewis worked on the Poe Statue Project, which added a bronze statue of Poe on Boylston Street near Charles Street South in 2014. He also curated an exhibition at the Boston Public Library called The Raven in the Frog Pond: Edgar Allan Poe and the City of Boston, which ran from December 2009 through March 2010. Alluding to Poe’s disdain for the Boston authors of his time and the way their poetry sounded to him like the “croaking of frogs,” the exhibit looked into Poe’s complex relationship with his birthplace and its writers.

As well as researching about Boston’s famous writers, Lewis has left his mark on BC through his teaching style .

“Along with being a warm, generous colleague and friend, Paul has shown a rare ability to continually reinvent himself as a scholar-teacher,” said fellow BC English professor Christopher Wilson. “But what’s even more impressive, to my mind, is how Paul’s students have become genuine collaborators in the public scholarship he has modeled.”

Lewis also works with his students to uncover pieces of writing from authors and poets who may have been famous in their time, but whose names have been forgotten throughout history. Lewis has amplified his impact on studying Boston in a literary sense by recognizing the potential of today’s technology.

“For all the strange craziness of the internet, it really is democratic in the way that it allows undergraduates to suddenly do research in days and hours that it would’ve taken a graduate student or professor years to do,” Lewis said. “So undergraduates can find really interesting stuff, and my teaching has changed around that.”

In 2016, Lewis collaborated with 17 BC English majors to publish a book called The Citizen Poets of Boston: A Collection of Forgotten Poems. He and his team read through thousands of poems related to Boston’s literary history in the process of curating the collection.

“Working with Professor Lewis is akin to working alongside an archaeologist,” said Kelsie Dorn, BC ’12, a member of the team handling the project. “He knows how gently we must treat our ‘subjects’—literally so in the case of handling the books at the Massachusetts Historical Society—but his excitement for the subject matter makes it difficult to not simply dive right in with both hands.”

Lewis’ students come to a more in-depth understanding of Boston’s history from his courses, but Lewis also said he recognizes that he learns alongside his students.

“Paul was always more like a colleague to me than a superior, even though he started out an unseen force of nature behind things I revered as an underclassmen,” Dorn said.  “I realized I viewed very few, if any, other teachers as colleagues, but Paul had always been just that—an equal—because that is how he had always treated both me and all of his other students.”

Though Lewis’ work has expanded over the years, he hasn’t stopped focusing his content on humor. Recently, he published a humorous piece about how the Longfellow Bridge should be renamed.

Though his interests have shifted over time, Poe and his presence in Boston have remained at the forefront of Lewis’ career. He curated an exhibition at BC in 2015 called Nathaniel Hawthorne and Fredrick Douglass: Texts and Contexts, which focused on the work of those famous writers but connected, again, back to Poe’s views of Bostonian literature.

“Boston was the center of American literary creativity up to about 1850,” Lewis said. “You had a literate English culture here from 1620 on when the Puritans came. They wrote poetry, they wrote journal entries, they wrote sermons. That goes back much further … here than in most parts of the United States.”

Boston is a treasure trove for Lewis, serving as both a birthplace of American literature and a breeding ground for some of his favorite writers. From his teenage years to today, Lewis’ passion for gothic literature has continued to show him new avenues of teaching and research he can embark on and share with Boston College.

The Big Questions
To be Pro-Life, Be Pro-Climate