Home » BC Gives No. 7 Duke a Scare but Falters Down the Stretch 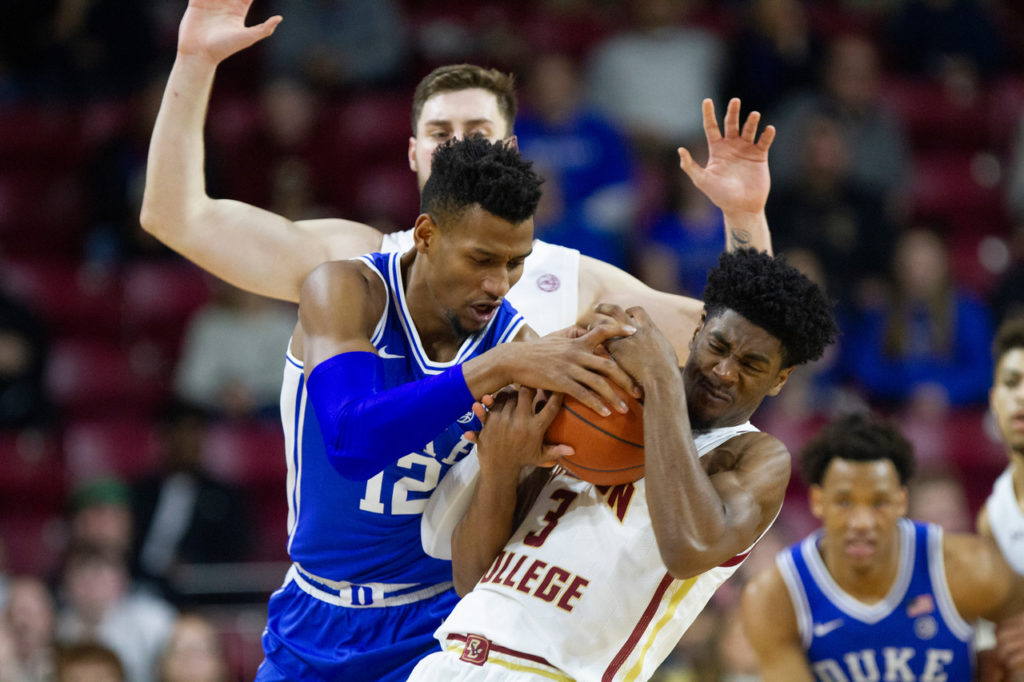 BC Gives No. 7 Duke a Scare but Falters Down the Stretch

Boston College men’s basketball led Duke, 47-43, with under eight minutes left in regulation. BC had already held the Blue Devils, who entered Tuesday with the nation’s third-best adjusted offensive efficiency, to a season-low 21 first-half points. Not only that, but the Eagles were also outworking the ACC’s second-best rebounding team on the glass. For the second time in three years, Duke was dangerously close to losing in Conte Forum.

But one 3-pointer—the Blue Devils’ first and only of the game—gave Duke the push it needed. Even though Joey Baker’s triple was quickly followed by a Jairus Hamilton’s jumper, it kickstarted a game-defining three-and-a-half-minute stretch. The Blue Devils stitched together a 10-0 run, turning a three-point deficit into a seven-point advantage. BC went 5:37 without a field goal and committed four turnovers during that span.

“We lost poise,” said sixth-year Eagles head coach Jim Christian. “And you can’t lose poise when you’re playing the No. 7 team in the country.”

BC ended the drought in the final stages of the game, but the Blue Devils maintained their lead and wrapped up a 63-55 win, their fourth straight.

No. 7 Duke (19-3, 9-2 Atlantic Coast) couldn’t buy a basket in the early going, especially in the paint. In fact, the Blue Devils made just one of their first 14 field goal attempts, a mid-range jumper from Tre Jones. Head coach Mike Krzyzewski’s team recorded two turnovers and three team fouls in the opening four minutes and didn’t really establish any sort of offensive rhythm until the latter portion of the first half.

BC (11-12, 5-7), on the other hand, jumped out to a 12-2 lead, energizing the sold-out Conte Forum crowd. The Eagles opened up the game 4-of-7 from the floor, with each of those four baskets coming inside the paint. All it took was a pair of dunks to get BC fans out of their seats.

First, Jairus Hamilton dodged Cassius Stanley, received a pass inside from Steffon Mitchell, and slammed home a two-handed dunk. A few minutes later, Derryck Thornton ran the break and lobbed a perfect ball for Jared Hamilton. Like his brother, Jared made a highlight-reel play of his own, leaping, catching the pass with two hands, and throwing down a jam. The 24-year-old swung around the rim before making his dismount to the roar of the student section behind the basket.

While BC was ahead for all but a minute and a half of the opening frame, the Eagles were far from perfect on the offensive end of the court. They couldn’t knock down shots from the perimeter, and they coughed up the ball nine times in the first 13 minutes of play. Fortunately for Christian and Co., Duke wasn’t having any better luck.

Thornton spearheaded BC’s offense throughout the night. The former Blue Devil compensated for six turnovers with a game-high 21 points on 7-of-13 shooting. Yet it was Steffon Mitchell who was perhaps the most impressive Eagle on the court during the first half. The do-it-all forward threw himself into passing lanes and boxed out the 6-foot-10, 270-pound Vernon Carey Jr. on multiple occasions—Mitchell was a big reason why the phenom freshman only converted five of his 13 shots from the floor.

Jairus Hamilton ended the half by missing back-to-back 3-point attempts from the left wing, but BC still had a 24-21 lead and the Blue Devils on their heels going into intermission.

“They thoroughly outplayed us in the first half,” Krzyzewski said. “As much as we told our guys what to expect, we weren’t ready for that.”

Duke went with a smaller lineup in the second half, as Krzyzewski told reporters after the game that his team needed to match up with the Eagles athletically to get things going offensively. Soon enough, the pace of play increased, and both sides traded baskets.

The Blue Devils started 5-of-9 from the field in the second half but committed a couple bad fouls 80-some feet away from their basket. Krzyzewski decided to switch to what he calls “22”—a defensive scheme somewhere in between a three-quarter and half-court press. The on-ball pressure stood the Eagles up and allowed Duke to transition into zone on the defensive end of the hardwood.

A pair of Jones free throws gave the Blue Devils a 36-34 lead with 13:29 remaining, but neither team was in the driver’s seat—partially because both sides continued to struggle from deep. The teams started a combined 0-of-26 from 3-point land. It wasn’t until the 11:18 mark in the final frame that the dry spell was put to rest.

Nik Popovic, a 29 percent 3-point shooter, handed the ball off to Thornton and patiently waited for his point guard to draw the double team before setting his feet, catching a pass from Thornton, and making the game’s first triple. It was nothing but net for the 6-foot-11 center—and it revitalized Conte Forum, which hadn’t seen the Eagles log a field goal in close to four minutes.

Once again, Duke and BC were back to swapping baskets. The Eagles got the last laugh prior to the next media timeout, though. Back-to-back inside scoring plays from Jay Heath and Steffon Mitchell provided BC with its 47-43 lead.

It was downhill from there for the Eagles, as Duke’s aforementioned 10-0 run featured a balanced Blue Devils offense: a couple of inside moves from Carey, a jumper and a layup from Jones, and a fastbreak finish by Wendell Moore Jr.

BC made just one of its final eight field-goal attempts. Its jump shooters—namely Jared Hamilton—couldn’t get shots to fall when it mattered most. Although the Eagles performed marginally better from outside, they rounded out the night 2-of-18 from downtown.

BC got one with a minute and half left, as a Heath 3-pointer from the top of the arc closed the gap to five, but Duke converted a near turnover into an easy layup on the other end to practically ice the game.

The loss dropped BC back under .500, yet it marked Duke’s closest game since its Jan. 18 defeat against Louisville, as well as just the second time in the last 11 contests that BC has outrebounded its opponent.

A bit more than a month ago, the Eagles suffered a 39-point loss—their largest of the 2010s—at Cameron Indoor Stadium. On Tuesday night, they gave Krzyzewski and Duke a scare, showcasing just how much healthier and dangerous they’ve become since Dec. 31.

“Since the Pitt game on the road, I think we’ve played as well as anybody in the league,” Christian said. “Now, we’re not winning all of those games, but we’re playing pretty well.”