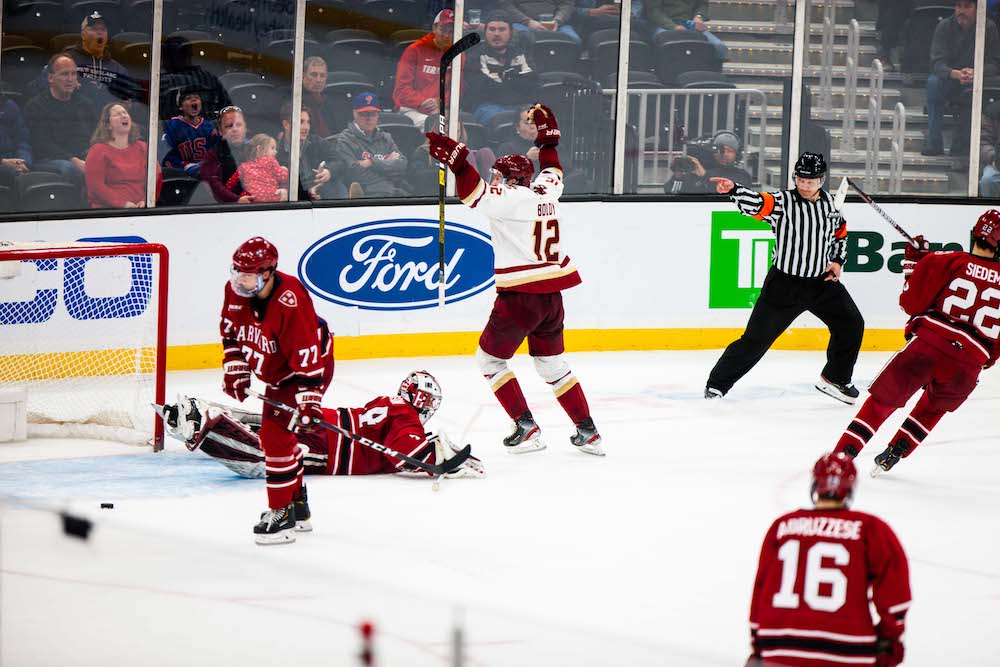 One week after Boston College men’s hockey fell to Boston University in a heartbreaking double overtime in the first round of the Beanpot tournament, the Eagles took on No. 18 Harvard for the consolation game. While the Eagles’ downfall in their last game came as a result of two quick goals by their Comm. Ave. rivals, BC flipped the script and scored two back-to-back goals against the Crimson, reinvigorating the team and leading it to a win. Here are some takeaways from the Eagles’ 7-2 victory over Harvard:

BC’s special teams initially struggled against Harvard. The Eagles’ first goal against the Crimson came on their first penalty of the night, after Matt Boldy was called for slashing early in the first period. While the Eagles were initially able to hold off the Crimson, Harvard found the back of the net and proved why the team leads the nation in power-play goals. As the first period continued, it looked as though the Eagles’ special teams would be their downfall. While BC is not known for its power play, the Crimson’s penalty-kill unit is not as effective as its power-play. And yet, the Eagles failed to capitalize on the two power-play opportunities that presented themselves in the opening frame.

But just as the Eagles as a whole came out reinvigorated for the second period, so did their special teams. On the very next penalty that was called against the Eagles—a hooking minor on Graham McPhee—BC fought back to score two shorthanded goals against Harvard. The play  was “a turning point in the game” for the Eagles, according to head coach Jerry York. While its penalty kill itself is only 40th in the nation at an .796 percent success rate, BC leads the nation in short-handed goals.

In the first period of the game, the Eagles and the Crimson seemed to be fairly evenly matched, with back-and-forth play dominating the frame. The two teams closed out the period with fairly even shots on net and shots attempted—the Eagles leading in both categories, 22-18 in attempts and 16-11 in shots on target. But in the second period, BC’s defense took it up a notch.

The Eagles dominated the Harvard zone as their defense simultaneously prevented the Crimson from going on any offensive breakaways. It wasn’t until nine minutes had passed in the second period that Harvard successfully breached BC’s zone and got a shot against Spencer Knight, while the Eagles had six shots on target, seven attempts, and a goal against Crimson goalie Mitchell Gibson.

One highlight of the Eagles’ season thus far has been the massive success of their rookie line—Boldy, Alex Newhook, and Mike Hardman. The three freshmen make up BC’s second line, just behind the likes of Logan Hutsko, David Cotton, and Julius Mattila. Each of the members of the line have been significant contributors to the team thus far in the season, totaling 21 goals and 51 points prior to the matchup against the Crimson.

With three goals and four assists between them, the rookies are the Eagles’ highest-performing line against Harvard. Newhook scored his 13th on a shorthanded breakaway, Boldy netted his third career goal in the dying seconds of the third period, and Hardman scored the final goal of the game early on in the final frame, with both Hardman and Boldy’s tallies being a culmination of efforts by the entire line.

“I think they each contributed,” said York. “They’ve played well together, and [tonight was] certainly one of Matt’s best games of the year. … I like all of those three guys [together].”

Going into the afternoon’s game, Julius Mattila had collected 99 career points with the Eagles over his four years in Boston. Mattila has proven himself to be a key factor to BC’s success both this season and throughout his career on the Heights. The Finnish senior only scored 16 total points his rookie season, but he quickly developed and solidified himself as a guaranteed 20-point player in the following campaigns. Mattila is already having a career season, netting 34 points in a fraction of the games—his previous career-high in points came during his sophomore year when he scored 27 points in 35 games played.

Midway through the first period of the second round, Mattila made an expert pass to linemate Cotton to collect his 100th career point with BC. His first-period assist marked his third of the tournament and fifth point over his four years participating in the Beanpot. The Eagles have only played in one Beanpot final since Mattila has been on the team—during the 2019 season when BC fell 4-2 to Northeastern—but it was clear that the experience had left a mark on him.

“Coming here from Finland to Massachusetts, I didn’t know what the Beanpot was about, but you learn pretty quick,” said Mattila following the win. “It’s unbelievable playing in front of 18,000 fans or whatever against BU. It’s a great experience.”

Prior to this game, the Eagles had lost four out of their previous six games, including back-to-back losses against Maine last weekend, and each of those losses came down to a one-goal differential. Even though the Eagles had come back to beat Harvard earlier this season, BC’s clear dominance over the Crimson was a much needed resurgence in the midst of a long and arduous season.