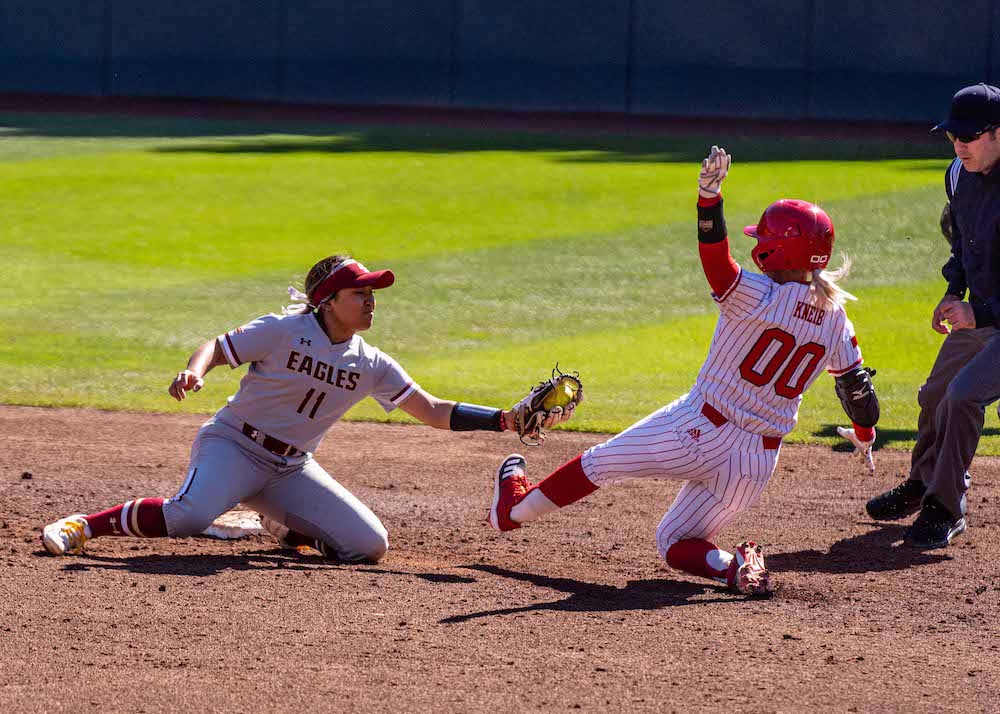 After a disappointing opening weekend for Boston College softball, the Eagles headed to Atlanta to take on Iowa and Nebraska in the ACC/Big Ten tournament. Both Iowa (7-2) and Nebraska (5-4) had won the majority of the games in each of their respective opening weekends, giving each of them an advantage over the struggling Eagles, who had gone only 2-3. Susannah Anderson continued to lead BC (3-6), starting on the mound for three of the Eagles’ four games, only resting for the first half of Saturday’s double header.

The Eagles opened the weekend against Iowa on Friday before playing a double-header on Saturday with Nebraska in the morning and Iowa in the afternoon, and closed the tournament against Nebraska on Sunday.

Anderson made her final start of the tournament in Sunday’s rematch against Nebraska. While the Huskers had been strong at bat in the earlier game, Anderson pitched her strongest game of the tournament, only allowing two hits in the Huskers’ seven innings. The Eagles’ fielders backed up Anderson and prevented Nebraska’s hitters from getting further than second base. Nebraska pitcher Olivia Ferrell and the Huskers’ fielders shut down the Eagles in the first two innings, but BC refused to give up. Gianna Boccagno stepped up to bat as the first hitter in the bottom of the third and hit a solo home run for the Eagles. Nothing else came out of the next two innings for BC, but Anderson continued to strike out the Huskers, allowing the Eagles to maintain their lead. The next tally came in the sixth inning, as Djhane Valido hit a single to send Ellie Mataya home. With Mataya’s additional run, the Eagles secured their first win of the weekend, 2-0.

Despite their loss to Nebraska earlier in the day, the Eagles came out strong against Iowa. While it was unable to score until the third inning, BC managed to quickly strike out Iowa in both the first and second innings, with only one player going on base from a walk by Anderson. But the Eagles’ triumph did not last long, as the Hawkeyes quickly fired back in the bottom of the third. Havyn Monteer scored first for Iowa, and the floodgates had opened from there. The Hawkeyes quickly scored twice more with runs by Aralee Bogar and Mia Ruther, and the Eagles were once again down against Iowa. Although the Eagles posted significant efforts in the remaining innings, they were unable to get another run back against the Hawkeyes and once again fell to Iowa. The Hawkeyes scored an additional run in the fifth inning, making the final score 1-4.

In the Eagles’ first game against Nebraska, junior CC Cook got her second start on the mound this season as Anderson rested for the afternoon’s rematch against Iowa. This game started on a much better note for BC, as Mataya scored the first run of the game in the top of the first inning, with Kristin Giery getting the RBI. But as soon as the Eagles headed to the field for the bottom of the first, Nebraska took over control of the game. With a player on second and third, Keana Pola singled on a hit to right center field, allowing her teammates to score two runs against the Eagles. While the Huskers tallied two more runs to increase their lead, BC continued to struggle at bat, striking out three straight hitters in the second and three out of five hitters in the third. Nebraska currently has the 14th best batting average in the NCAA, with an average of .370, and that strength showed in this game as the Huskers consistently got on base in each of the six innings they played. Despite a last-ditch effort to come back in the seventh inning, the Eagles only scored one extra run, falling 2-5.

Anderson opened the tournament for the Eagles, pitching two strikeouts against the Hawkeyes in the first inning before turning it over to Iowa. When BC lined up to hit against Allison Doocy, the team struggled to get on base, striking out three in a row, each team moving on to the second inning scoreless. Iowa continued to get chances, scoring a run in each of the second, third, and fourth innings, ultimately leading to Peyton Schnackenberg heading in to relieve Anderson. Meanwhile, the Eagles quickly struck out in the second and only got one player on base in the third after Doocy walked Boccagno. In the fourth inning, Mataya was walked and advanced to third, giving the Eagles their best chance at a run, but Labshere grounded out at shortstop, ending the inning. After the fourth inning, the Eagles were unable to get close to Iowa again, and a seventh inning run by the Hawkeyes served the final exclamation in the Eagles’ first loss of the tournament, 0-4.

Sam Roche: The Relay King of Boston College
Notebook: Speed of Play Is Key in BC’s Win Over NC State