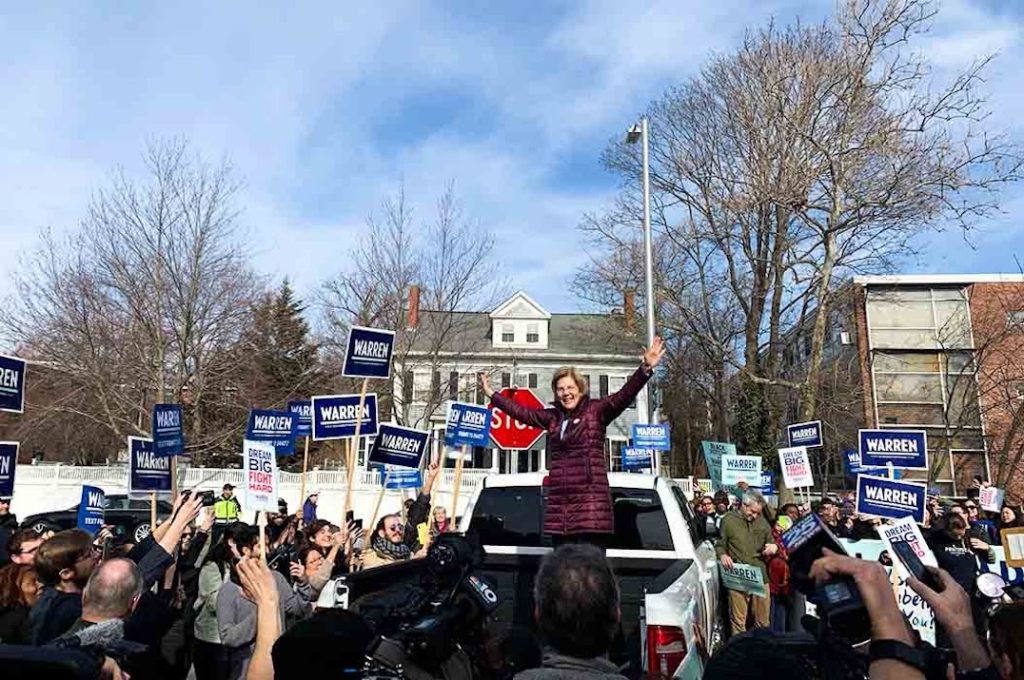 Senator Elizabeth Warren, the Democratic presidential candidate from Massachusetts, hosted a voting event at her local polling station on Super Tuesday, taking roughly 45 minutes to walk several blocks from her house as she greeted voters lining the streets of Cambridge.

Hundreds of supporters, made up of families with small children, groups of friends, and excited dogs, engaged in loud chants as Warren made her way to the Graham and Parks School. Cops lined the street, keeping people on the sidewalk, but when Warren passed by they began flooding into the street.

Many people carried signs in support of Warren, ranging from young children to the elderly. One man wearing a reflective vest and top hat stood next to two sign-carrying children in backpacks, while an adjacent woman introduced her golden retriever to another supporter’s border collie. Several supporters encouraged people to make phone calls for Warren, and others led the crowd in enthused chants.

“Dream big,” one man with a microphone yelled at the crowd, prompting a response of “fight hard,” in reference to one of Warren’s campaign slogans. As supporters cheered, dogs often barked along to the noise.

While Warren entered the school to cast her ballot in the Massachusetts Democratic primary, the crowd began chants of “L-F-G,” an acronym for “let’s f—cking go.” The members of the crowd then moved to the other side of the school, where they were told Warren would deliver an address.

When Warren emerged from the school with her husband, she climbed a stepladder up to a white pickup truck, and the crowd fell silent for the first time.

“I am so happy to be here in a place where Bruce and I have been voting for 25 years,” Warren said as children from the Graham and Parks School watched on from the second story of the building.

Warren looked to the schoolchildren as the crowd roared in approval.